Dozens of students, faculty, staff and WSU leaders joined representatives from The Boeing Company and other industry partners to celebrate the latest in a series of investments in the university’s land-grant mission made by the aerospace and technology leader.

The $5 million donation will be used to establish a new student success center within the Voiland College of Engineering and Architecture.

“The longstanding connection between WSU and Boeing has truly pushed our institution to new heights, through partnerships in groundbreaking academic research, scholarly collaborations and perhaps most importantly, student support,” Elizabeth Chilton, WSU provost and chancellor of the Pullman campus, said. “As we consider the values of Boeing and WSU’s land-grant mission, it’s apparent why this relationship has been so fruitful. We both hold a strong commitment to serve the public good both locally and around the world.”

Occupying an entire floor within the college’s forthcoming Schweitzer Engineering Hall, the Boeing Center for Student Success will give the next generation of Cougar engineers access to mentoring, tutoring, advising and career services. It will serve as a central hub of modern engineering and design efforts, allowing for vital innovation and collaboration opportunities as well as access to technology and other resources vital to preparing WSU students to enter the 21st century workforce.

WSU President Kirk Schulz noted that while the exact length of time the university and Boeing have been partners is hard to pin down, the significance of the relationship is clear.

“This ongoing support and investment in WSU has been through endowed professorships, fellowships, internships, scholarships for our students, learning centers and countless other programs over the years,” Schulz said. 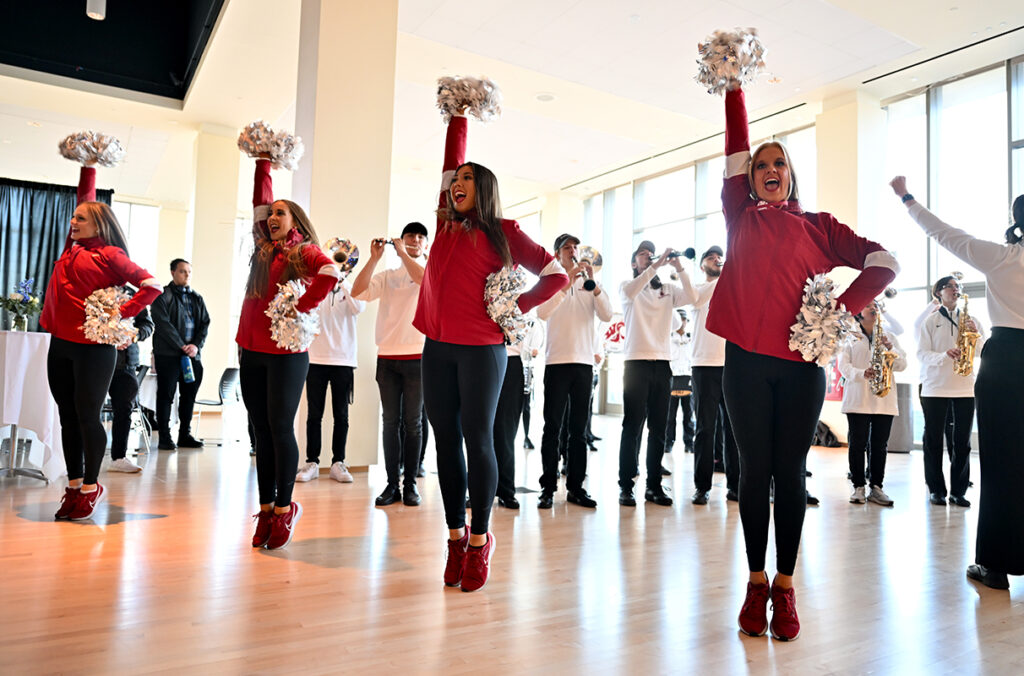 Attendees were treated to a rousing rendition of the WSU Fight Song.

Boeing has contributed nearly $30 million in cumulative investments to WSU over the years. These investments have supported academic, research and service initiatives across the WSU system and have made Boeing the university’s largest corporate supporter. Boeing is also consistently among the leading employers of Voiland graduates.

In the past four years, first-year retention rates among Voiland students have increased more than 13% thanks in large part to first-year coursework and extracurricular engagement opportunities. The Boeing Scholars program gives students the chance to work on real-world problems through senior capstone and other classroom projects. There’s also the Boeing Mentorship program, which pairs Boeing employees with students to provide guidance and insight on the aerospace industry.

“Not only has Boeing helped to assure the construction of our student success building, this gift opens further opportunities for the continued modernization of the entire engineering and architecture precinct on our campus and ensures that the learning and research environments that we have as a community continue to meet the needs of our students,” Mary Rezac, dean of the Voiland College of Engineering and Architecture, said.

Craig Bomben, vice president of flight operations and enterprise chief test pilot for Boeing, noted that this gift was possible in spite of the significant financial challenges faced by the aerospace industry in recent years. The WSU grad noted that Boeing is excited to provide opportunities for engineering students and is actively looking to recruit the next generation of engineers who will help innovate in areas like unmanned vehicles, space travel and more.

Following remarks inside the Senior Ballroom within the Compton Union Building, guests were entertained by the WSU Marching band, prompting those in attendance to stand up and join the rendition of the WSU Fight Song.