There were some darn good NFL quarterback performances from Week 7’s slate, including what we saw from Patrick Mahomes as his Kansas City Chiefs dismantled a previously league-best San Francisco 49ers defense.

On the other end of the ledger, many signal callers struggled as their teams lost important games. Tom Brady was among the worst to take to the field as his Tampa Bay Buccaneers were humiliated by the Carolina Panthers by the score of 21-3.

Meanwhile, former No. 1 pick Jared Goff continued to be a mistake waiting to happen in a loss to the Dallas Cowboys. Below, we give you our five worst NFL quarterback performances from Week 7. 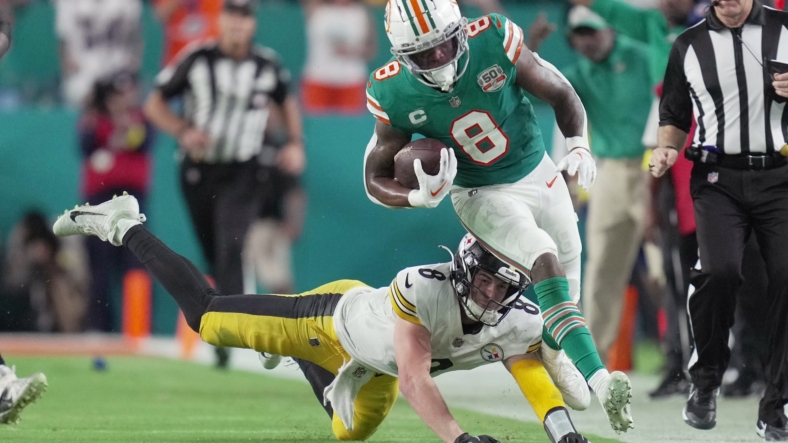 Returning from a head injury he suffered in Week 6, two late interceptions against the Miami Dolphins cost this rookie and his team big time Sunday night. Despite Pittsburgh’s defense being able to shut out the Dolphins’ offense in the second half, Pickett’s struggles throwing the ball were magnified in a big way. It’s to be expected given his status as a rookie, but he’s been a pretty bad NFL quarterback in limited playing time this season.

There’s been times that Pickett has looked good. It also must be noted that a couple of these interceptions were not his fault. With that said, the youngster can’t continue to make mistakes like what we saw Sunday in South Beach if he wants to be seen as the Steelers’ franchise guy moving forward. All said, Pickett completed 32-of-44 passes for 257 yards with a touchdown and three interceptions against Miami. 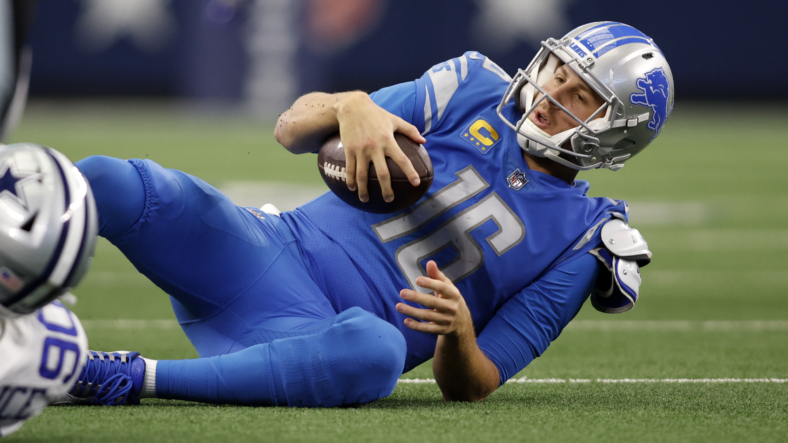 Goff started this make-or-break season out in pretty solid fashion, throwing 11 touchdowns against three interceptions in his first four starts. Detroit had the NFL’s highest-scoring offense during that span. Boy, how things have changed since. In Sunday’s 24-6 loss to the Dallas Cowboys, Goff threw two interceptions and lost two more fumbles. He made several mistakes late in the game as Detroit attempted a comeback in Big D.

What we’ve seen from Goff over the past two starts is a clear indication that he ‘s not a starter-caliber NFL quarterback right now. The former No. 1 pick has led the Lions to a total of six points with zero touchdowns and six giveaways during that span. Ouch! 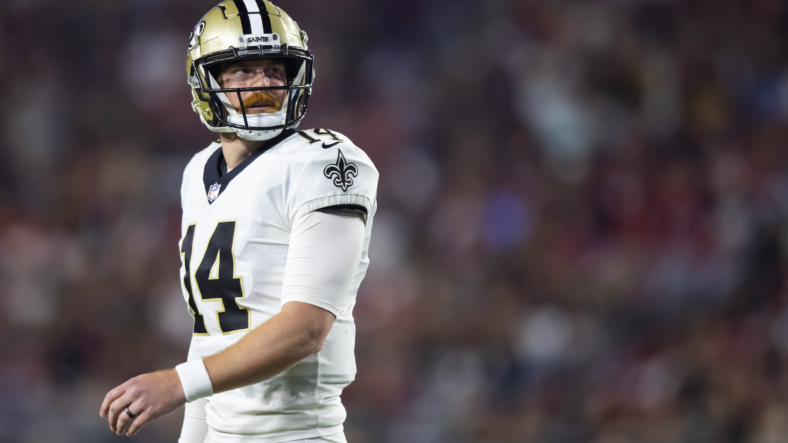 Well, we don’t see that every day. Late in the second quarter of Thursday’s game against the Arizona Cardinals, Dalton threw two consecutive pick-sixes. This capped off a span of under 2:30 minutes in which the Cardinals scored 22 points heading into intermission, pretty much ending the game in the process.

Interestingly enough, there were some who had been campaigning for Dalton to be the Saints’ full-time starting quarterback once the injured Jameis Winston returned. Primarily, that’s due to Winston’s issues with turnovers. All said, Dalton’s Week 7 stat line was absolutely absurd. He completed 30-of-47 passes for 361 yards with four touchdowns and three interceptions. What this might mean moving forward is anyone’s best guess.

“The three takeaways were killers in the game. We’ve got to fix some of these issues. That’s my responsibility,” Saints head coach Dennis Allen said following Dalton’s Week 7 performance.

New Orleans finds itself at 2-5 on the season and pretty much in the midst of a lost season. Neither Dalton nor Winston seem to be the long-term answers. Though, there’s no reason to tank with the Saints’ first-round pick in the 2023 NFL Draft headed to the Philadelphia Eagles. Right now, starting a higher-upside Winston seems to make the most sense. 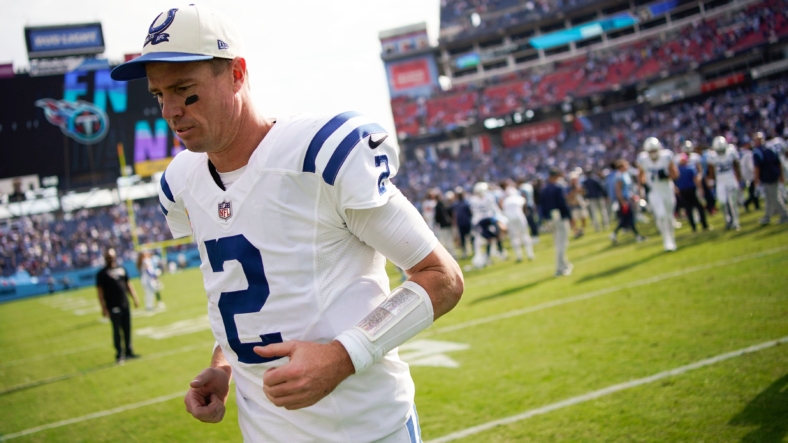 Following Sunday’s brutal loss to the Tennessee Titans, one unnamed scout went as far to say that Ryan’s arm is shot. He threw two more interceptions, both in ugly fashion, and now leads the league with nine picks through seven games. That forced Colts head coach Frank Reich to make the shocking announcement that he has benched the former NFL MVP in favor of youngster Sam Ehlinger.

“Right now the move is for Sam to be the starter for the rest of the season. It’s a big step but we think he’s ready. This guy’s special. Sam, he’s got that about him. He plays, he practices in a way he’ll be ready.”

Ryan, 37, completed 33-of-44 passes for just 243 yards with a touchdown and those two interceptions in Sunday’s 19-10 loss to the Titans. He was doing absolutely nothing to help this offense score points. While Ehlinger might not be the answer, Ryan certainly isn’t. 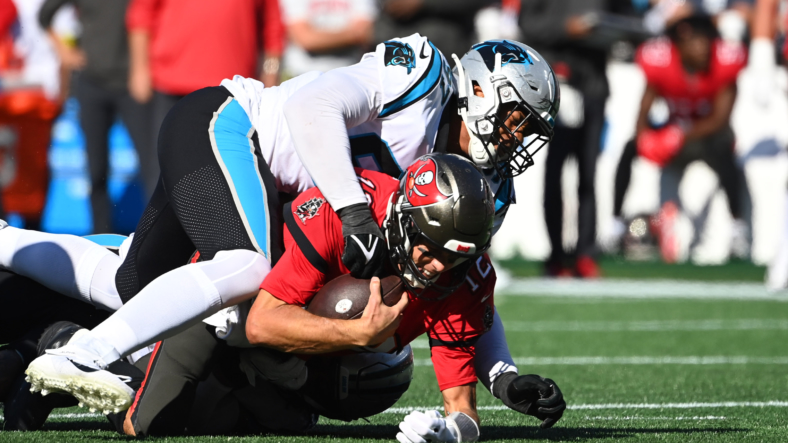 The single-greatest NFL quarterback of all-time finding himself on a list like this has to be considered a sad culmination to brilliant career. With that said, Tom Brady was among the worst at his position during NFL’s Week 7 slate. That’s not hyperbole.

Dating back to Week 5, Tampa Bay has scored all of one touchdown in its past 25 offensive possessions. The team is not even attempting to throw the ball down field. Brady targeted Chris Godwin and Mike Evans a combined 28 times on Sunday. The two Pro Bowlers finished the game with 139 yards on those targets as Tampa Bay was humiliated by the hapless Carolina Panthers by the score of 21-3.

At 45 years old, it seems as if Brady has hit that proverbial wall. Let’s just hope he finds a way to perform better down the stretch so that our final images of him on a football field are not similar to what we saw on Sunday.