Wednesday Addams, the perpetually perturbed daughter in the Addams Family, has had several image makeovers in her fictional lifetime: In The New Yorker comic strip that introduced her to the world in the late 1930s, she didn’t even have a name. When the family became the focal point of the 1964 TV series on ABC, she was a (mostly) sweet-natured 6-year-old; by the time she appeared in the 1991 film, played by a then-10-year-old Christina Ricci, Wednesday had become the blueprint for the wry, dark, moody goth girl we know today. Wednesday, the new Netflix series, updates her once more — this time making her a teenager with psychic abilities and a strong sleuthing spirit that makes her the perfect choice to investigate a murder mystery that’s entangled her family for decades.

“She’s probably definitely one of the characters that I’ve related to most,” says Jenna Ortega, the 20-year-old actor tapped to play the beloved character in the series. “I appreciate the way that she speaks her mind. And when she says she doesn’t care if people don’t like her, she truly does not care. And I think that’s really impressive, especially in this day and age.”

Visionary filmmaker Tim Burton, whose distinct visual language has been cemented in films including Beetlejuice, Edward Scissorhands, and The Nightmare Before Christmas, directed half of Wednesday’s eight episodes, giving Wednesday a singular, specific look that’s right in line with Burton’s style. Rich in color and texture and nods to gothic horror, Wednesday follows the sassy supernatural sister as she heads off to Nevermore Academy, a school for fellow misfits — including werewolves, vampires, and gorgons. But even in a school for outcasts, Wednesday is still an outsider: She speaks the blunt truth and finds the interests of people her own age dull and childish.

Wednesday isn’t meant to be particularly deep; it’s fun and cheeky. Yet there is nonetheless something poignant, and perhaps symbolic, about a young woman asserting herself her own way, even if it alienates others; Wednesday is a nonconformist of supreme confidence and numerous talents who is unafraid to stand up to anyone, including her parents, her peers, and, as viewers will see in the series, the school system and the whole town if need be.

“There is something very powerful and enticing about her embracing her quirkiness or weirdness,” Ortega tells Shondaland. “But [the message] is that there’s always space for you, and you should never feel the need to kind of conform to other people’s expectations or give people what they want [while forsaking] one’s own well-being.”

This iteration of Wednesday also marks the first time the character has been played by a Latina — a big deal since Latinx people are woefully underrepresented on TV. The role makes Ortega part of the 3.1 percent of Latinx leads on TV, despite the fact that Latinos are 19 percent of the U.S. population. It’s also significant since, as Twitter intellectuals have pointed out, the Addams Family was always Latino: The patriarch’s first name is Gomez, after all. Ortega, whose on-screen dad is played by the celebrated Puerto Rican actor Luis Guzmán, says she appreciates that Wednesday doesn’t make the family’s heritage a big deal or even a talking point. 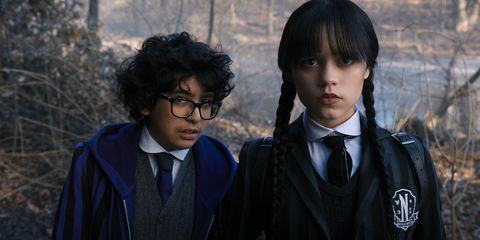 Moosa Mostafa as Eugene Otinger and Jenna Ortega as Wednesday Addams in episode 104 of Wednesday.

“I don’t think it was that big of a deal on the show, which was kind of nice, because it’s just kind of acknowledged, known information,” she says. “A lot of times, they put a person of color in a film; it’s kind of like checking a box, like, ‘Oh, look at what we’ve done!’ And they try to push it as far as they possibly can. Wednesday is just who she is. You don’t have to talk about it. And naturally, having actors who are very known in the Latin community, like Luis Guzmán, is very powerful and speaks volumes.”

Yes, Wednesday is Latina, but first and foremost, she is a literal force of nature thanks to her powers: She plays the cello, fences, and practices archery. Most importantly, she’s a modern girl with very old-school values, which is to say she’s earning her confidence in the healthiest way possible: going after what she wants and standing up for herself.

“With social media, it’s very easy for teens to be wrapped up in things and be more insecure than they naturally would be if they didn’t have people to compare themselves to over the internet,” Ortega says. “So, I just appreciate the fact that she still exists in this world. And she’s just as quick-witted and sure of herself as she’s always been.”