Wednesday review: Ortega glowers through a predictable yet amusing mystery

Wednesday review: Ortega glowers through a predictable yet amusing mystery

Netflix’s teen comedy ‘Wednesday’ follows the titular goth girl wading her way through a chilling murder mystery at her new school of outcasts as the number of brutalised victims piles up.

Wednesday Addams is a girl who’s pale as a corpse and edgy as the sharpest dagger out there. Having a penchant for the wicked and the morbid, she’s not queasy about releasing piranhas into the pool where her brother’s bully swims with all the smugness of said cinematic archetype.

Following her vengeful prank, she is expelled from her school and her parents are delighted to send her to the Nevermore Academy — the boarding school of outcasts where they themselves studied and fell in love with each other.

Nevermore is a place she dreads most, and her cheerful roommate who’s the polar opposite of Wednesday in more ways than one.

There are also two boys that take a romantic interest in her, and while she isn’t keen on opening up and giving something like ‘love’ a chance, she eventually finds herself exhibiting a change in personality, even if it’s a smidge.

Meanwhile, the main thing that keeps her within the school is a chilling series of murders, a monster who’s been committing them, and a prophecy that puts herself at the centre of all of this.

Amid conflicting feelings, distractions, heartbreaks, and morbidities aplenty, many twists unfurl and unravel, but Wednesday finally pulls through and defeats the monster, kills a resurrected pilgrim, and puts an end to an impostor’s anti-outcast plans.

Actors are a major part of what makes this teen comedy work. From Gwendoline Christie to Fred Armisen, even the ones on the periphery deliver strong performances.

The younger members of the ensemble bring their A-games as well and do a great job during the grim moments as well as the campy ones.

It’s Jenna Ortega, though, who truly shines exceptionally in the acting department, carrying just about every scene she’s in almost entirely by herself, even when the writing inspires little else than groans and cringe.

Apart from the aforementioned performances, it’s the world-building that does sometimes work, although it’s severely underused.

The chemistry between Wednesday and Thing is really adorable, and their arc from being at odds with each other to being the best of friends is heartwarming.

And so is the relationship between her and Enid, a character who deserves a lot more screen time and development.

The mystery at the centre of the plot is incredibly predictable, and it doesn’t make sense for a reader like Wednesday to not see this twist coming.

A lot of characters are sidelined and then left off without a conclusive or satisfactory treatment of their storyline. One of the most notable victims of this drawback is the character of Bianca, with Enid and Weems being two among others.

The final episode is a dud, in its send-off to the main antagonists, and in the way, it doesn’t tie up loose ends to the viewers’ expectations, while rushing to drop a tease for its sophomore season.

Wednesday makes for an amusing and rather predictable binge with twists that most would see coming, but would tag along for the journey in spite of all its hitches. 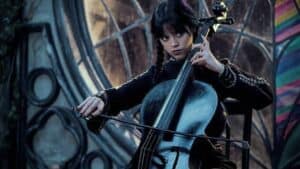 Also read: Wednesday ending explained: Who is the Hyde monster?