Elon Musk is the new owner of Twitter Inc., ending months of uncertainty for Silicon Valley and shareholders. Yet for debt bankers on Wall Street, the drama is far from over, as they’ll need to convince investors that the Chief Twit’s ambitions for the company can justify its heavy debt load.

With the $44 billion deal now closed, a Morgan Stanley-led cohort that provided about $13 billion of debt financing to help fund the acquisition of Twitter is now saddled with risky loans that they never intended to keep on their books. The banks now face the unenviable task of selling it off without realizing big losses -- and that’s not going to be easy.

For a start, the cost of borrowing has soared.

Yields on junk bonds in the CCC tier, where Twitter’s riskiest unsecured debt would likely be rated, have soared to 15.4%, well above the 11.75% maximum interest rate that the banks promised Musk on that portion of the debt financing. That would force the banks to offer steep discounts if they tried to offload it to institutional investors at current rates, and they’re on the hook for the difference -- to the tune of losses of more than $500 million for the entire debt package.

The banks, and Musk himself, will also need to explain why Twitter’s bot problem isn’t a problem after all, and how the company can afford the huge annual interest burden that is nearly $1.2 billion a year by one estimate. Without a rapid turnaround plan, and new sources of revenue and cost cuts, Twitter will burn through cash.

A representative for Morgan Stanley didn’t immediately respond to requests for comment.

Musk plans to assume the role of chief executive officer at Twitter, taking the helm of the social media giant on top of leading Tesla Inc. and SpaceX. Musk intends to replace Parag Agrawal, who was fired along with other major executives upon completion of the takeover, Bloomberg reported.

The controversial deal, also financed with $33.5 billion of equity from Musk and other backers, has left many constituencies unhappy, including Twitter employees, some users of the platform around the world, and arguably Musk as well given the purchase price that now looks far too high given the slump in stock markets.

Winning the mandate to support the acquisitive ambitions of the world’s richest man was supposed to be a coup back in April. Morgan Stanley provided the largest commitment, followed by Bank of America Corp., Barclays Plc, and Mitsubishi UFJ Financial Group Inc.

But then months of uncertainty about whether the deal would go ahead followed as Musk backtracked. And by the time he agreed to buy the San Francisco-based tech firm in October, debt markets were reeling. Even if they could have tried selling bonds and loans to help fund the deal, the banks had barely any time to put the wheels in motion due to the court-issued deadline of Oct. 28. 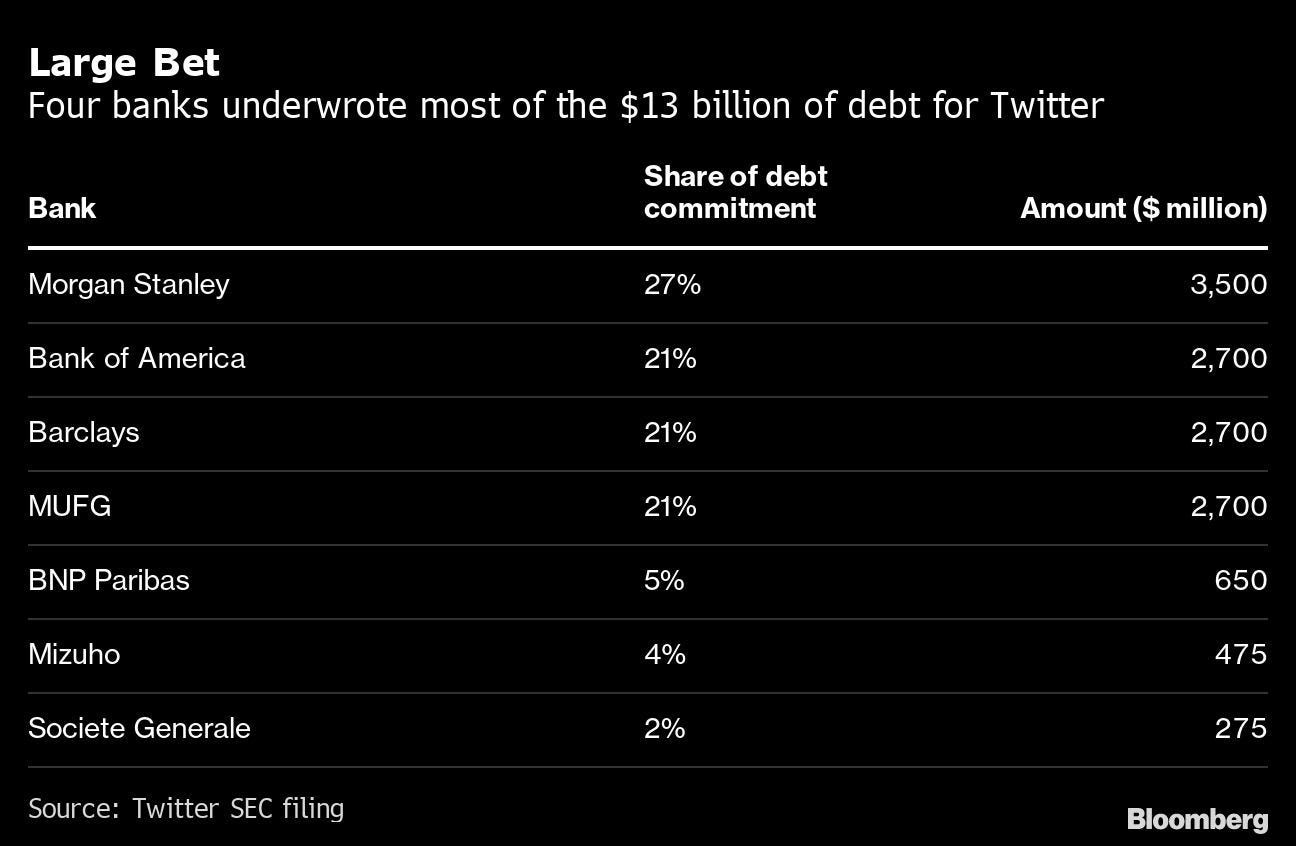 This marks the biggest so-called hung deal for a leveraged buyout this year, and one of the largest on record. The Twitter deal is just one of many troubled LBO transactions causing problems for Wall Street in this latest cycle, albeit at a much smaller scale than during the 2007-2008 Great Financial Crisis, when banks faced a debt backlog of more than $200 billion.

Banks have already used about $30 billion of their own cash this year to fund loans for acquisitions and buyouts that they weren’t able to sell to investors, and adding Twitter to the pile takes that figure to over $40 billion.

Wall Street lenders have also sustained billions of dollars of writedowns this year after central banks worldwide started hiking rates to tame inflation, pushing borrowing costs above the maximum interest rates they’d promised for mega deals. A different group of banks realized roughly $600 million in losses for the buyout of Citrix Systems Inc. in September and were forced to hold roughly $6.5 billion of the debt. Lenders supporting the buyout of Nielsen Holdings Plc. were stuck with more than $8 billion of debt.

Musk now has grand plans about how he will use Twitter as the basis of a new X.com “everything app.” After spending months lambasting the social media company over the bot problem and a whistleblower as he tried to weasel out of the deal, Musk has now promised to help his bankers market the debt to money managers.

Those potential buyers will be focused on the health of Twitter as a company. Credit conditions have worsened in recent months amid high inflation, quickly rising rates, and recession fears. With buyside demand limited, banks now find themselves as direct creditors to the social-media platform, rather than as providers of temporary bridge financing, as is typically the case.

The lenders originally planned to sell $6.5 billion of leveraged loans to investors, along with $6 billion of junk bonds split evenly between secured and unsecured notes. They also provided $500 million of a type of loan called a revolving credit facility that they would typically plan to hold themselves, though it is unclear if that was drawn or undrawn when the deal closed.

Eventually when markets calm, the banks will likely try and sell at least part of the debt to investors, which is when they will ultimately realize those losses -- unless there’s a big and unexpected rebound in market risk appetite.