Defending champions France and one of the heavy favourites Argentina begin their campaigns on Day Three of the 2022 World Cup in Qatar.

Didier Deschamps' side, who won the 2018 World Cup after beating Croatia in the final, are looking to become the first side to win the tournament back-to-back since Brazil in 1958 and 1962. Les Bleus begin their defence against Australia with the other Group D opener seeing Denmark face Tunisia. 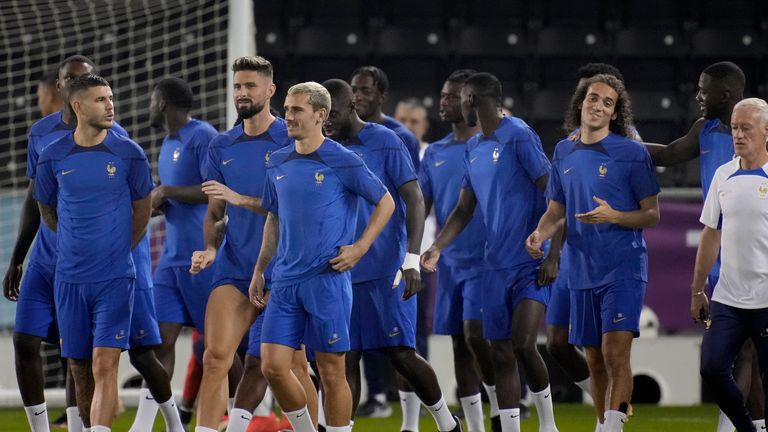 Didier Deschamps' France get their campaign under way

Day Three begins with Argentina and Lionel Messi's quest to win the World Cup as they start their Group C campaign against Saudi Arabia followed by Mexico versus Poland in the same group.

Argentina star Lionel Messi has played down rumours of a pre-tournament injury as his nation prepares to take on Saudi Arabia.

The PSG star has been seen with padding on his right ankle in training in recent days but Messi says he is not carrying anything ahead of the Group C opener. 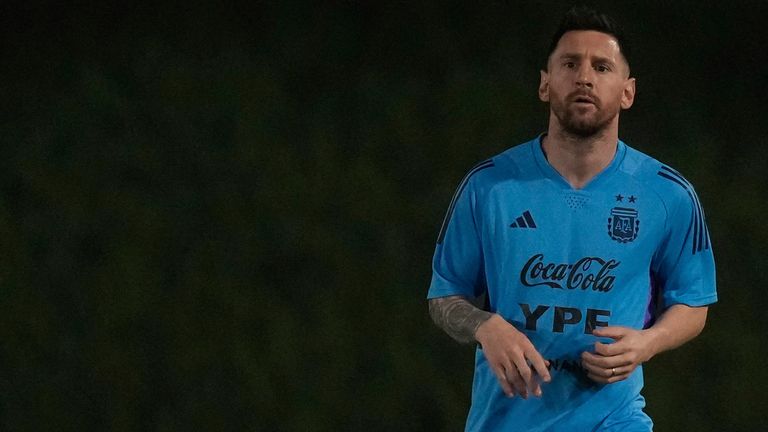 "No issues whatsoever," said Messi, who was pictured at practice with extra padding on the inside of his right ankle.

"I heard there were rumors of having to miss part of training or be away from the team because of a blow, but it's nothing out of the ordinary."

Saudi Arabia coach Herve Renard is not worried by two of the squad's goalkeepers' lack of playing time this season ahead of their match against Argentina.

Renard did not announce the name of the goalkeeper who will lead the Green Falcons' starting line-up, but Muhammad Al-Owais has played 42 times for the national team, compared to just seven internationals for Muhammad Al-Yami.

"The goalkeeper who will play tomorrow's match has played 17 World Cup qualifiers so there is absolutely no problem," the Frenchman told a news conference on Monday. The third goalkeeper in the squad, Nawaf Al-Aqidi, is still waiting for his debut with the national team.

Renard also stood by his decision to exclude veteran custodian Abdullah Al-Mayouf, who announced his retirement in 2019 before reversing his decision and saying he was available for selection.

Denmark's World Cup opener with Tunisia will mark a personal victory for playmaker Christian Eriksen, who suffered a cardiac arrest in their Euro 2020 opener in Copenhagen last year but has since made a full recovery. "We are all happy and thankful that Christian is here after what happened," Danish captain Simon Kjaer said.

"As a football player, probably one of the best I'm ever seen in terms of quality and love of the game. Every minute he plays, it's only a plus for Denmark."

Tunisia have two players in the Danish league, Anis Ben Slimane at Brondby and Issam Jebali with Odense.

The latter says he has not been able to provide any special insight into Tuesday's opponents as the Tunisian technical team have been meticulous in their planning.

"We have a great technical staff and they have prepared well for the game," Jebali said. "We know the Danish set-up, how they play and even how they think. We have a very good chance, we are a good squad. We are strong, we trust each other and have a good team spirit."

Mexico forward Raul Jimenez's fitness remains a matter of concern ahead of their opener with Poland. The fitness of Raul Jimenez is a concern for Mexico

Jimenez has not played for Wolves since August due to a groin injury. He had a 45-minute run-out in a friendly against Sweden last week but appeared to look uncomfortable in a recent training video.

Mexico goalkeeper Guillermo Ochoa said: "It is unfair they took five seconds of a video and said he was not good.

"He has looked very good in training. In Raul I see much motivation, hunger and an enormous ambition to be on the field." 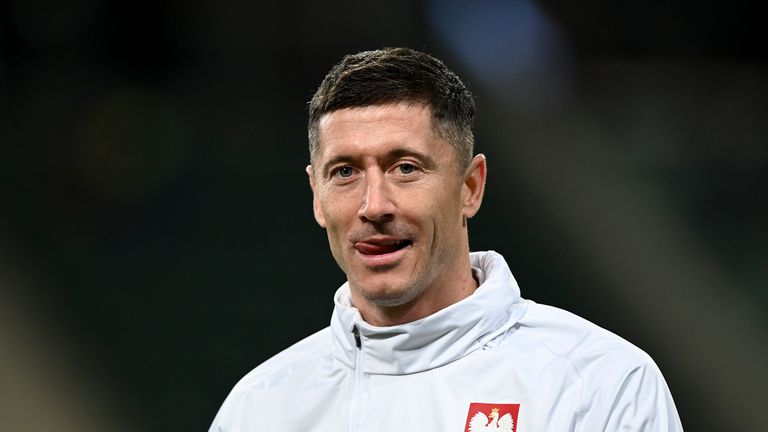 Despite his prolific record for club and country, Poland striker Lewandowski is yet to score at a World Cup finals.

Speaking at a press conference, Juventus keeper Szczesny said: "It's definitely a very important tournament to him. I can see that he is very motivated for this championship.

"There is no doubt that he is, if not the best, then one of them. He would like to fulfil his ambitions not only at club level, but also with the national team.

"I hope that years later we will remember Robert's great performance at the World Cup in Qatar."

France have been hit by a series of injuries, which ruled out key midfielders N'Golo Kante and Paul Pogba, and most recently Ballon d'Or winner Karim Benzema, who left the squad in the early hours of Sunday after withdrawing with a thigh injury, and centre-back Presnel Kimpembe. 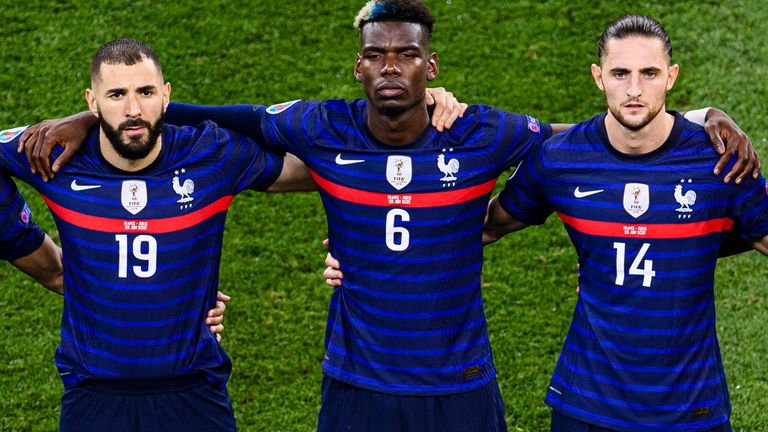 Karim Benzema (left) and Paul Pogba (centre) are both injured

"We still believe in our chances, in our squad. The last-minute withdrawals, especially Karim's, did not help," France captain Hugo Lloris told a news conference. "But I want to think that the team will move on."

Deschamps needs to reshuffle his attacking line in the absence of Benzema, with veteran Olivier Giroud likely to start as a lone forward.

At the back, Deschamps will be able to rely on centre back Raphael Varane, who he says has shaken off a hamstring injury that had prevented him from training with the team last week.

Please use Chrome browser for a more accessible video player

Sky Sports' Peter Smith and Nick Wright analyse some of their favourite stars to keep an eye out for during the World Cup 2022 in Qatar. Their one to watch for day three is France and Real Madrid's midfield general Aurélien Tchouaméni

"He is doing well and available for tomorrow's game," Deschamps said.

Australia coach Graham Arnold's plans for their opener with France were hit when winger Martin Boyle pulled out on Sunday with a knee injury.

Boyle has a decent scoring record with five goals from 19 appearances for Australia.

"We all feel for Martin and it is a cruel blow for him," Arnold said. "He has been an integral part of our journey to get to Qatar."

Argentina are unbeaten in all four of their previous meetings with Saudi Arabia (W2 D2), with this the first meeting between the sides at the FIFA World Cup.Argentina have made it past the first round in 12 of their last 13 World Cup appearances, the only exception coming in 2002.All six of Lionel Messi's goals at the FIFA World Cup have been scored in the group stages, never finding the net in 756 minutes of play in the knockout phase of the tournament. Meanwhile, Messi is also the only player to have registered an assist at each of the last four World Cup tournaments.France have qualified for their 16th FIFA World Cup. It's their seventh appearance in a row, their longest ever run of participations.Since 1998, France have reached the final of the FIFA World Cup in three of the six editions (1998, 2006, 2018), more than any other nation in this time.France have won their opening match in just three of the last 12 editions of the FIFA World Cup (D4 L5) - Germany in 1994, and Brazil in both 1998 and 2006

Please use Chrome browser for a more accessible video player

Cristiano Ronaldo says he is "bulletproof and iron-clad" following his explosive interview last week and says he is fit for Portugal's World Cup opener against Ghana on Thursday.

He said: "The atmosphere is excellent, no problems, we are completely focused. You can help by not talking about me. I'm completely bulletproof and iron-clad.

"If you ask other players about Cristiano Ronaldo I would be upset. If you want to ask him about the World Cup and the team, I would like you to do that."

He added: "In my life, the best timing is always my timing.

"I don't have to think about what other people think. I speak when I want. The players know me really well for many years and know the type of person I am.

"Its an ambitious group that is hungry and focused. So I'm sure it [the interview] won't shake the changing room's concentration and focus."