If midnight is a metaphor for the end of the world, we’re just ninety seconds away, according to the Bulletin of the Atomic Scientists.

The Bulletin of the Atomic Scientists’ Science and Security Board shifted the hands of its Doomsday Clock, a graphic that represents how close humanity is to the brink of destruction, on January 24. The Doomsday Clock now stands at 90 seconds to midnight, the closest it’s ever been, thanks mostly to Russia’s war on Ukraine and the rapidly escalating effects of climate change. In other words, the world is pretty much a dumpster fire sitting next to a powder keg.

What does it mean that the Doomsday Clock is at 90 seconds to midnight?

In a nutshell, the time on the Doomsday Clock tells us how worried its Science and Security board members currently are about humanity destroying itself. There's good reason to pay attention to that; these are extremely well-informed experts in geopolitics, environmental sciences, and biosecurity. If you're flying on an airliner next to an aeronautical engineer, and your seatmate suddenly starts looking for a parachute, you'd probably do well to pay attention.

But the "90 seconds to midnight" figure isn't based on any formula or equation. The Doomsday Clock doesn't actually tell us how far away we are from the end of the world as we know it, and it doesn't tell us our odds of triggering the apocalypse in 2023. It's the global-security version of asking someone how they feel on a scale from 1 to 10. 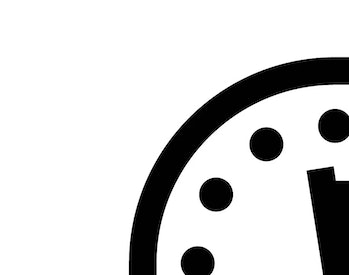 Why does the Bulletin of the Atomic Scientists update the Doomsday Clock?

The Bulletin of the Atomic Scientists is trying to draw attention to the ways humanity is messing around and putting itself in danger — in the hope that we'll respond by changing policies or behaviors. It's aimed at the general public, but also at the world's political leaders and corporations.

This year, the Bulletin’s Science and Security Board emphasized climate change, emerging diseases, bio-security, and the spread of nuclear weapons (amid growing international tensions).

Traditionally, the Doomsday Clock focused on that last item; the first Doomsday Clock graphic, published in 1947 on the cover of the Bulletin, referred specifically to the looming Cold War specter of nuclear war with the Soviet Union.

One of the biggest issues on the board members’ minds in 2023 is the ongoing Russian invasion of Ukraine, which started in February 2022. According to the Bulletin’s Science and Security Board, the invasion — and Russian president Vladimir Putin's repeated hints that he's willing to go nuclear — has increased not only the risk of someone using nuclear weapons, but also the risk of a catastrophe at a nuclear power plant like Zaporizhzhia, which Russian forces have occupied.

Where did the Doomsday Clock come from?

In 1945, a group of the same nuclear scientists who developed the first atomic bomb decided to launch a publication, called the Bulletin of the Atomic Scientists. Their goal was to remind the public and elected officials of the dangers of nuclear war, in hopes of avoiding it. Two years later, in 1947, the Bulletin's cover featured a simple black and white clock face, set at seven minutes to midnight — artist Martyl Langsdorf's effort to convey the imminent risk of U.S.-Soviet nuclear war.

The Doomsday Clock was born.

Since 1947, the Doomsday Clock has moved forward and back several times. The farthest we've ever been from midnight was in 1991, when the end of the Cold War prompted the Bulletin to set the clock at 17 minutes to midnight. 2023's clock is the closest to midnight it's ever been; the time to midnight dropped from minutes to seconds at the beginning of 2020.

In 2007, the Bulletin decided to concern itself with issues beyond nuclear proliferation and nuclear war; today it's website lists climate change, disruptive technologies, and biosecurity as other areas of concern.

Tag: is nuclear war imminent, is nuclear war imminent 2022, will there be a nuclear war soon, is nuclear war still a threat, can a nuclear war end the world. Atomic ScientistsWhy, The Doomsday Clock.
Related News
A Q&A With Rachel Bronson, the Woman Behind the Doomsday Clock
Scientists set Doomsday Clock closer to midnight than ever before
‘Doomsday Clock’ set at 90 seconds to midnight amid Ukraine crisis
Doomsday clock – live: Experts announce how close we are to midnight and oblivion
The Doomsday Clock is now at 90 seconds to midnight — here's what that means
The Doomsday Clock Has Moved: How Close Are We to Armageddon in 2023?
Five things to do before the Doomsday Clock hits midnight
Doomsday clock hits 90 seconds to midnight as world gets closer than ever to “global catastrophe”
League Patch 13.3 To Include Massive Support Champion Changes
'Doomsday Clock' moves closer to midnight as nuclear threat rises
7 Shows Like ‘GLOW’ To Watch If You Miss the Series
Doomsday Clock at record 90 seconds to midnight amid Ukraine crisis
Latest News
Tyre Nichols case revives calls for change in police culture
IMF projects rosier global economic outlook for 2023, expects inflation to ease - National
PM to open Ekushey Book Fair on Wednesday
Irving has 26, Nets beat Lakers 121-104 as James, Davis sit
Was Zachary Levi on ‘The 700 Club?’ His CBN News interview, explained
MP Paul Holmes backs Eastleigh College over ‘incorrect’ Ofsted report
The art of forensics: How police sketches work in a digital world
Column: Asia diesel profit margin to tango with China exports, Russian ban: Russell
Without LeBron James and Anthony Davis Nets Beat Lakers 121-104
Nets takeaways from Monday's 121-104 win over Lakers, including 66 bench points
Apple Renews 'Acapulco' for Season Three
Cindy Williams, a ‘truly kind woman with a big heart,’ celebrated by Hollywood peers
Cindy Williams, Laverne & Shirley Actress, Dies At 75
Former Wagner commander describes brutality and incompetence on the frontline
China says Covid-19 under control