The Catch on Channel 5: Who stars in the cast alongside Jason Watkins?

The Catch on Channel 5: Who stars in the cast alongside Jason Watkins?

The series introduces us to Ed Collier, a fisherman and family man whose tranquil life is turned upside down when his daughter starts to date a mysterious man called Ryan.

It’s a fraught psychological thriller that promises to keep you guessing until the very end.

So who is in the cast of The Catch on Channel 5?

Here’s everything you need to know. 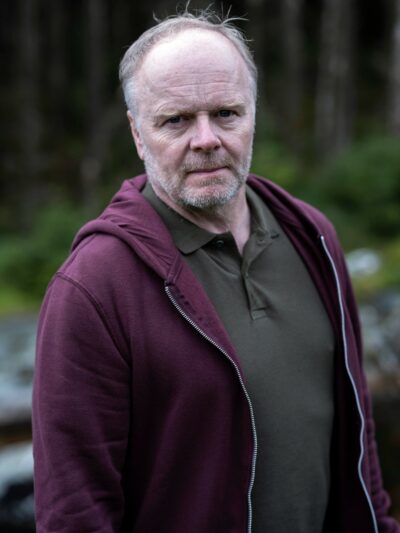 Jason Watkins plays the lead role of Ed Collier, a proud husband and father who is determined to do whatever it takes to keep his family together.

However, when his daughter introduces him to her new boyfriend, Ryan, he is immediately wary and doesn’t trust him.

Is Ed right to dislike him? You’ll have to watch and find out!

Jason Watkins is a British stage and television actor, who has been in the business for more than 30 years.

He started his career working on the stage and is also a member of the National Theatre Company.

In 2014, he appeared in The Lost Honour of Christopher Jefferies, and quite rightly won the Best Actor BAFTA award for the role.

Jason, now 60, then went on to play Harold Wilson in season 3 of The Crown.

In 2020, he took on the lead role of DS Dodds in the ITV crime series McDonald & Dodds.

The actor has also appeared in multiple other TV shows, including Midsomer Murders, Line of Duty, Call the Midwife and Doctor Who.

Viewers will also know him from roles in W1A, Des, Hold the Sunset, Trollied, and The Hollow Crown.

Jason is married to jewellery designer Clara Francis, and the pair have two children together, Bessie and Gilbert.

The pair also had a two-and-half-year-old daughter together, Maude, who tragically died of sepsis in 2011.

In an interview with the Mirror, Jason opened up about the anniversary of his daughter’s death.

He confessed: “Clara and I both get quite emotional on that day and in the lead-up to the anniversary.

“We just walk to her bench as a family, and with friends, then everyone comes back to our house. It’s a nice thing to do.” 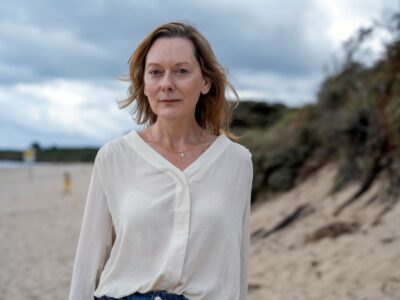 Cathy is well-known for playing Patricia Hennessy in the crime drama Red Rock.

Her first ever role in TV was as the Desk Nurse in the show Screen Two in 1993.

She then appeared in the shows Glenroe, and Paths to Freedom.

However, before landing the role of Lucy Reilly in Glenroe, Cathy confessed that she almost gave up on her dream job.

She told the Mirror: “I did try to leave three or four years in because I couldn’t handle the insecurity.

“I don’t think my skin was tough enough to handle the rejection.”

But thankfully, Cathy managed to bag the role in the Irish drama series before it was too late.

Cathy added: “And then I landed the role in Glenroe. God bless it! That was a huge deal and I took that as a sign.”

The actresses’ other notable TV roles include Terry McGowan in The Clinic, Mara O’Brien in ROY, and Ivy in Miss Scarlet and The Duke. 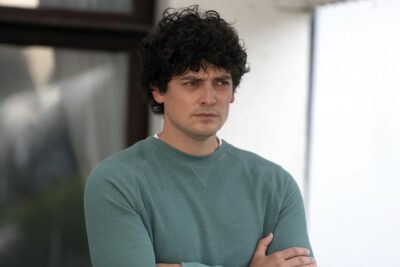 Ryan Wilson is played by Aneurin Barnard in The Catch (Credit: Channel 5)

Aneurin Barnard stars as Ryan Wilson in The Catch

Aneurin Barnard plays Ryan Wilson in the psychological thriller The Catch on Channel 5.

Ryan is Abbie Collier’s new boyfriend and, although he seems like the perfect man, Ed is suspicious of the new addition to his close-knit family.

Is Ryan really who he says he is?

In 2017, the actor starred alongside Harry Styles, Cillian Murphy and Tom Hardy in the war film Dunkirk.

He then took on the role of Boris in the film The Goldfinch in 2019.

In the same year, Aneurin played James Steerforth in The Personal History of David Copperfield opposite Dev Patel and Ben Whishaw.

You can also spot Aneurin in the popular TV shows Peaky Blinders, The Pact, and Time. 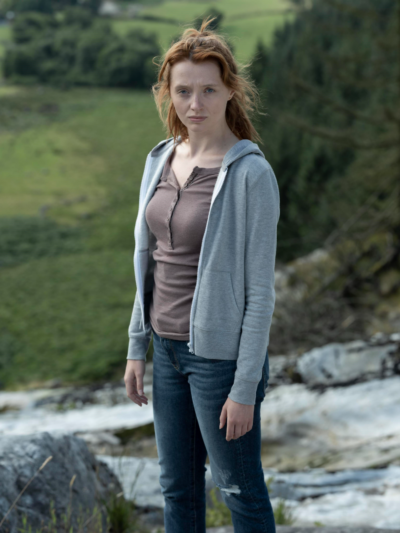 Abbie is delighted to bring home her new boyfriend, Ryan.

He’s young, successful and rich, but there’s something about him that Abbie’s father, Ed, doesn’t trust.

Poppy’s first onscreen role was back in 2020, where she appeared as Lesley Pike in an episode of Call the Midwife.

She then appeared in the TV mini-series The Pale Horse as Thomasina Tuckerson.

The year 2021 is when Poppy’s acting career really started to take off, as she played Ginevra de Benci in the drama-history series Leonardo.

However, Poppy’s biggest role to date is arguably the lead role in the ITV series, Chloe, in 2022. 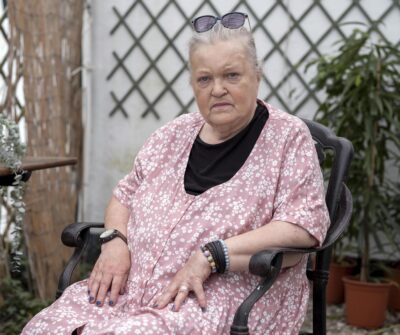 In 1990, Brenda became the first Irish actress to ever win an Academy Award, when she bagged the gong for Best Supporting Actress in the biopic, My Left Foot.

One of Brenda’s first roles was staff nurse Maloney in Coronation Street.

Nurse Maloney attended the birth of Tracy Barlow in an episode of the ITV soap in 1977.

Of course, Casualty fans will know that Brenda went on to play another nursing role, as Megan Roach in the medical drama series.

However, Brenda left the series in 1990 because she believed her character had “started off with a wonderful sense of humour, but lost it all”.

She told the Independent that all Megan “seemed to do was push a trolley around and offer tea and sympathy”.

The actress is also well known for her roles in Hollywood films including Home Alone 2: Lost in New York, So I Married an Axe Murderer, and A Time To Kill.

Most recently, she was quietly excellent as Mrs Meany in Holding. 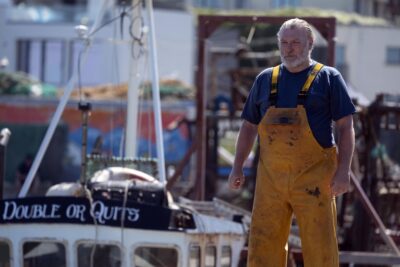 Ian Pirie takes on the role of Bob Chapman in The Catch.

The actor turned professional in 1996 with no formal training, when he landed a role in the critically acclaimed West End revival of Jesus Christ Superstar in London.

Ian played the role of PC Trevor Moore in EastEnders in 2001.

In 2019, he then starred as Kenny Shaw in The Capture, and Vincent Keir in the series Traces.

He also portrayed Henri opposite Jodie Comer, Adam Driver and Matt Damon in The Last Duel.

Jade Jordan is featured in the cast The Catch

Jade is known for her role in the horror film You Are Not My Mother.

She also played Tara Fisher in No Return, and Debbie Gleeson in Redemption.

You can also spot Jade in an episode of Doctors.

In 2021, Jade was shortlisted for the Irish Book Awards for her autobiography Nanny, Ma and Me.

The book describes her experiences as a Black Irish woman, and tells the stories of her grandmother, Kathleen and her mother Dominique.

Tracy is a British actress who played Ruth Knowles in The Bill.

In 2011, she then took on the role of Catherine Kane in EastEnders.

The jobbing actress has also appeared in episodes of Manhunt, Top Boy, and Holby City.

Who else is in the cast of The Catch?

The cast of The Catch also features The Dark Knight Rises star Cameron Jack as Craig.

And, last but not least, Morgan Palmeria plays George in the Channel 5 series – and it’s his first ever TV role!

Read more: Jason Watkins’ fans rally around him after he was the victim of crime

Are you looking forward to The Catch? Leave us a comment on our Facebook page @EntertainmentDailyFix and let us know what you think.

Tag: the catch channel 5 cast, is there a catch up on channel 5, does channel 5 have a catch up channel, is there a channel 5 catch up app. The Personal History of David Copperfield, The Lost Honour of Christopher Jefferies.
Related News
The Catch on Channel 5: Who stars in the cast alongside Jason Watkins?
Aneurin Barnard in The Catch: What else has actor been in and how do you pronounce his name?
The Catch, Channel 5, review: Jason Watkins is wasted on this bland thriller
The Catch book ending explained: The Channel 5 series ending could be different to the book it’s based on
Jason Watkins admits it was 'very hard' to make documentary about death of daughter
The Catch’s Jason Watkins teases hints behind chilling episode 1 moment
Jason Watkins shares 'difficult' personal connection to The Catch after daughter's death
The Catch cast revealed for new Channel 5 drama
Livewire: Lotus, Angel Olsen, lovelytheband and the Best Concerts to Catch in Cleveland Through Early February
Daisy Jones and the Six release date, cast, trailer plot
Jason Watkins can 'understand' parent bereavement in The Catch
Where was The Catch filmed and set and why the very different location in T.M Logan’s book was so key to the gripping storyline?
Latest News
Tyre Nichols case revives calls for change in police culture
IMF projects rosier global economic outlook for 2023, expects inflation to ease - National
PM to open Ekushey Book Fair on Wednesday
Irving has 26, Nets beat Lakers 121-104 as James, Davis sit
Was Zachary Levi on ‘The 700 Club?’ His CBN News interview, explained
MP Paul Holmes backs Eastleigh College over ‘incorrect’ Ofsted report
The art of forensics: How police sketches work in a digital world
Column: Asia diesel profit margin to tango with China exports, Russian ban: Russell
Without LeBron James and Anthony Davis Nets Beat Lakers 121-104
Nets takeaways from Monday's 121-104 win over Lakers, including 66 bench points
Apple Renews 'Acapulco' for Season Three
Cindy Williams, a ‘truly kind woman with a big heart,’ celebrated by Hollywood peers
Cindy Williams, Laverne & Shirley Actress, Dies At 75
Former Wagner commander describes brutality and incompetence on the frontline
China says Covid-19 under control