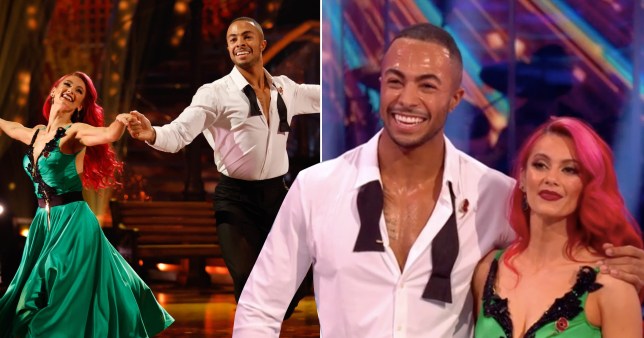 His peachy behind got in the way (Picture: BBC)

While a peachy bottom might be sought-after by most, it proved to be somewhat of a hindrance for Tyler West in his Viennese waltz.

The Kiss FM DJ and pro partner Dianne Buswell delivered an elegant performance to I’ve Been Loving You Too Long by Seal for their routine on Saturday night.

After gliding across the dancefloor, the couple – who’ve scored more 10s than anyone else this series – earned a respectable score of 29.

Craig Revel Horwood, however, had his criticisms, praising Tyler’s dancing ability but wanting him to be ‘more graceful.’

‘It was a little pedestrian for me and I’m not saying that to be horrible, but you were, sort of, dancing too much into the ground like a street dance rather than something flowy and beautiful,’ the judge said.

‘Your bottom was sticking out a lot,’ he declared.

Tyler and Dianne scored 29 for their performance (Picture: BBC/Guy Levy)

Jumping to defend himself, Tyler sighed: ‘I’ve just got a big bum! Ugh!,’ before bursting into laughter.

‘You’re tilting and your bum is sticking out and you’re a bit too low in the knees,’ Craig added.

Head judge Shirley Ballas also noted a few ‘mistakes’ in his routine, while Anton Du Beke added that the couple dance together ‘beautifully,’ but said the DJ needed to work on his top line to keep improving.

He took the comments in good spirits! (Picture: BBC)

The judging panel weren’t the only ones with their eyes on Tyler’s derrière, as one cheeky fan tweeted: ‘We have noticed your “big bum,” Tyler!,’ followed by a winking emoji.

‘Tyler’s bum was quite nice tho,’ argued another.

Tyler and Dianne – who have dubbed themselves Team TyDi – will be hoping they’ve done enough to survive the dreaded dance-off, after finishing mid-leaderboard.

Tyler and Dianneâ€™s dance was visually so stunning I donâ€™t even know why but it looked like they were moving at a different speed and floating around the floor. I thought it was going to be 10s #strictly— Mel_c246 (@Mel6781) November 5, 2022

Definitely voting for Tyler. This week wasn’t amazing but he deserves to make it to the end based on every other performance.#strictly #scd— Victoria (@beaneee) November 5, 2022

Meanwhile, Hamza Yassin soared to the top once again with an incredible score of 38 thanks to his flirty cha cha cha.

Close behind him were Kym Marsh and Helen Skelton, who both earned 37 points each for their Argentine tango and jive respectively.

Alas, Arsenal legend Tony Adams found himself at the other end after earning just 21 points.

But, it’s all in the hands of the viewers and, with Blackpool edging closer, no one wants to go home…

Strictly Come Dancing continues Saturday and Sunday on BBC One.