Their performance had a heartbreaking meaning behind it as Kym dedicated her routine to her son, Archie, who tragically died shortly after he was born in 2009. 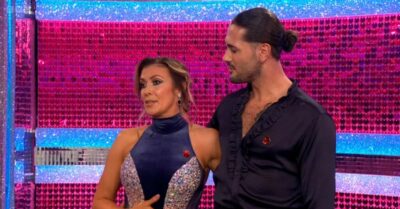 After her performance, the judges gave their feedback.

Craig Revel Horwood said: “Lovely heel turn, that was really well controlled. Did you offer the wrong leg for the lift?”

Craig continued: “That was a bit of a disaster but the storytelling was absolutely immaculate. In and out of the lifts was beautiful. Simple and gorgeous.”

Motsi Mabuse said: “The message you tried to put through I think that the fragility, the vulnerability it came through and I felt that. It started so well, I don’t know what happened.

“In the middle of all that there was a sudden change in energy and I’m thinking why, that started so strongly. But the end you gathered yourself and you did a great ending.”

Shirley Ballas continued: “It did start off so beautifully and you did go in that corner and you did offer the wrong leg, but you suddenly realised and you got on the correct foot and you gave him the right leg. 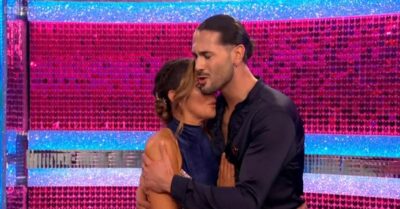 “But maybe it was because of that you thought that’s a big deal. It’s never a big deal if you make a mistake as long as you can pick it up and I thought you picked it up divinely.”

Anton Du Beke added: “I thought it was beautiful. There’s nothing more difficult than to dance a difficult dance that means something so much to you. I think we all appreciated the dance, it was a beautiful dance.”

Speaking to Claudia Winkleman after the feedback, Kym became tearful as she apologised to Graziano over the small mistake. 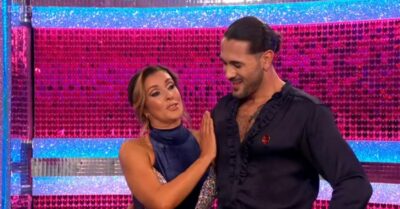 She said: “I made some silly mistakes that I haven’t made before but I think it was just the whole emotion of the evening that got to me.”

Turning to Graziano, Kym added: “I’m so… thank you so much. It’s just been so nice to be able to dance that dance.”

As Kym teared up, Graziano hugged her as he told her he was “proud”.

When asked how much it would mean to get through to Blackpool, Kym said: “It would mean so much to me, and I’d love to do it, not just for me, but for Graz because he’s never been able to dance there before.”

She then looked at her partner and said: “I’m sorry if…” before Graziano hugged her and said: “Noooo babe. Honestly.”

Despite the mistake, Kym received a score of 31 out of 40.

Viewers watching supported Kym on Twitter as one tweeted: “Kym Kym Kym. A little mastake that she got in her head about. A beautiful dance though.”

Another said: “Kym and Graziano, just beautiful. A couple of little mistakes but didn’t matter. The storytelling and the lifts were amazing!”

A third wrote: “I need to give Kym Marsh a hug right now you don’t understand.”

What did you think of Kym’s dance? You can leave us a comment on our Facebook page @EntertainmentDailyFix and let us know.