Hamza Yassin has admitted he struggled with an onslaught of social media messages after being announced as part of Strictly Come Dancing’s 2022 line-up.

The wildlife filmmaker is matched with pro dancer Jowita Przystal in the BBC’s juggernaut series and has been consistently wowing judges Motsi Mabuse, Shirley Ballas, Anton Du Beke and Craig Revel Horwood with his moves.

As the final creeps closer and closer, Hamza and Jowita appeared on Thursday’s Loose Women where they discussed their stint on the competition series with Denise Welch, Nadia Sawalha, Jane Moore and Kaye Adams.

Jane heaped praised on the camera operator, saying he was ‘what the show is all about’ because he wasn’t ‘showbiz’ and had a great amount of ‘humility.’

Referencing his TV career, which sees him spend extended periods of time alone and away while observing nature, Jane asked him if he had ‘struggled’ with ‘bombardment’ of Strictly.

Hamza replied: ‘To be honest, yeah. I wanna say yes because I was and I am on social media but as soon as I got announced there was all this: “Who is he?” “I don’t know who he is”. And, granted, you’re not meant to know who a wildlife cameraman or presenter is.’

Jane jumped in and said: ‘But you’ve never had that before in your life?’ 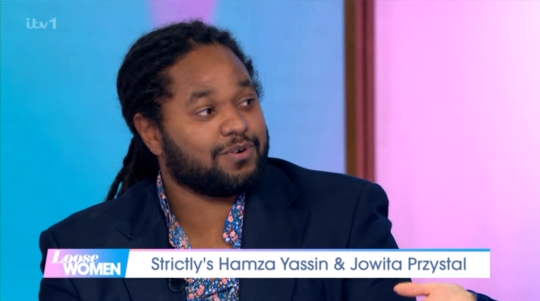 Hamza wasn’t used to the attention before Strictly (Picture: ITV)

Agreeing, Hamza replied: ‘Normally I wasn’t under the spotlight’, before revealing he turned to Jowita for advice.

He explained the supportive dancer told him ‘not too worry’ and to just ‘be himself’, adding that Jowita ‘carried him through most of the week.’

Despite achieving near-perfect scores of 40, Hamza previously revealed he still fears each week will be his last on Strictly.

Speaking about his doubts, he told the PA news agency: ‘Every week I think this is going to be the week that we are out because I am struggling to get the steps. But sometimes it goes really well.

The Loose Women panel are rooting for Hamza (Picture: ITV)

‘We never really think of, “We are going to the final”. We just focus on the week that is up and for us to perform well in that particular week. And if we do well, sweet, we are on to next week.’

In the last week’s Strictly, Hamza and Jowita placed third after opening the Blackpool special in sophisticated style by performing an elegant American smooth to New York, New York by Frank Sinatra.

Hamza has consistently been at the top of the Strictly leaderboard (Picture: PA)

Dressed in a tail suit, Hamza performed dizzying lifts and spins to secure a score of 38.

Shirley tipped him as the one to beat, saying: ‘Hamza shone brighter than all the baubles and beads and bangles in the world.’

MORE : Hamza Yassin in floods of tears after emotional family video and performance dedicated to his roots