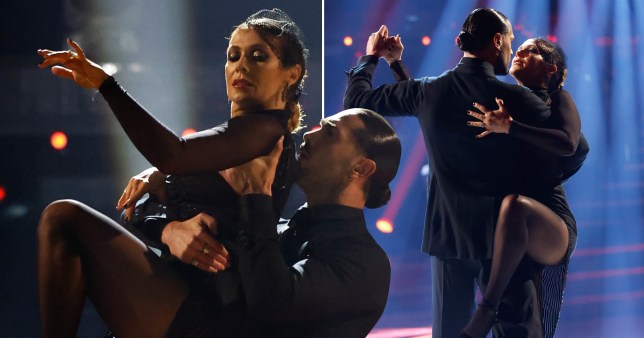 The former Coronation Street actress and Italian choreographer have had a turbulent ride throughout the show thus far, having previously found themselves in a dance-off.

Wearing all black, the soap star took no prisoners, as she mastered the tricky lifts and high kicks, and scored a seriously impressive 37 points from the judges.

Craig Revel Horwood noted that, apart from Kym’s raised shoulders (because he always picks up on something!) he felt it was an ‘absolutely perfect’ routine.

Anton Du Beke praised her intensity and said he ‘loved it,’ scoring Kym a 10, while Shirley Ballas said she felt it was ‘by far one of the most accomplished routines’ she has seen Kym perform.

The couple were absolutely lost for words as they celebrated their scores (Picture: BBC)

‘Kym and Graziano OMG what a brilliantly sexy tango. That stare at the end was intense!’, a third wrote.

A fourth joked that the duo looked as though they were ‘about to kiss’ at the end of the dance, as they stared into each other’s eyes for what felt like eternity.

Kym and Graziano pulled that one out of the bag! Loved it. #Strictly— Stephanie Shrubb ðŸ‡­ðŸ‡° (@stephsiu) November 5, 2022

The best dance of the series for me that was from Kym and Graziano. That was sublime. #Strictly— Ryan Glendenning (@RyanGSoapKing11) November 5, 2022

Plenty also hailed it the ‘performance of the series’ and branded Kym a ‘dark horse,’ implying she could be the one to scoop that glitter ball trophy later down the line.

‘Also Kym & Graziano were ROBBED tonight. Sorry but that routine should have been 40. Absolutely fantastic!’, tweeted one passionate fan.

Kym placed second on the leaderboard, sitting comfortably next to Helen Skelton and Gorka Marquez, who scored 37 for their energetic jive.

They narrowly missed out on the top spot, as Hamza Yassin earned a mega 38 for his cheeky cha cha cha.

Strictly Come Dancing airs Saturday and Sunday on BBC One.