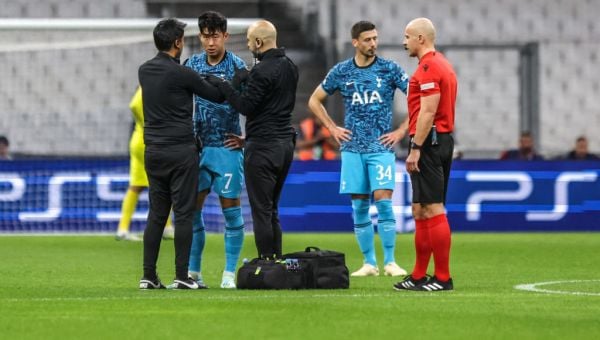 Tottenham will wait until Wednesday to assess the extent of the injury suffered by Son Heung-min in the Champions League win at Marseille.

The South Korean went off in the first half at the Stade Velodrome after a collision with Chancel Mbemba and looked very wobbly as he left the pitch.

Spurs went on to book their place in the last 16 with a last-gasp 2-1 win as second-half goals from Clement Lenglet and Pierre-Emile Hojbjerg overturned Mbemba’s first-half opener.

But the injury to Son is a worry, especially with the Premier League clash with Liverpool coming up on Sunday, while he could have worries over the forthcoming World Cup.

Assistant head coach Cristian Stellini, standing in for the banned Antonio Conte, said: “In this moment we don’t know. We have to wait for a medical assessment. Sonny feels better now. I saw him in the dressing room, he celebrated with us.

“We are not sure if he is concussed. It is Son’s face. His eye is a bit swollen.”

Spurs’ place in the last 16 was not guaranteed until Hojbjerg won it with the last kick of the game to seal top spot in Group D.

With Marseille needing a win to go through and a defeat knocking Spurs out, it was an evening of jeopardy for the Premier League side in a hostile environment in Provence.

Conte, who celebrates one year in charge on Wednesday, was forced to watch from the stands due to his red card after the VAR controversy against Sporting Lisbon last week, which meant Tottenham’s qualification fate went down to the final game.

And the Italian was put through the wringer as his side produced a listless first-half performance, deservedly falling behind to Mbemba’s header.

The second half was a different story, though, and Lenglet put Spurs back in control with a header of his own in the 54th minute.

But with Marseille needing just one goal to send them out, it was a nervy evening until Hojbjerg’s late intervention.

And it was not an evening Conte enjoyed.

Stellini added: “I had the possibility to talk with Antonio. He was very tired. He lived the game in the crowd, it’s not normal.

“Maybe he spent more energy in the stands than he normally spends on the touchline.

“It was very difficult the first half. In the difficulties we didn’t lose our minds. We stayed in the match. It was terrible the goal we conceded because from a corner they took it quickly and we were not prepared.

“The stadium was very hot in the first half and sometimes it is normal to give the possibility to the opponent to play, to use the energy you have in the second half. It could also be a strategy.

“We need to try to play all the 90 minutes in the same level.”