Pride of Britain 2022 viewers were left in tears after watching Anton Du Beke‘s sweet gesture to a little girl.

Carol Vorderman and Ashley Banjo hosted the event and many famous faces were in attendance.

One emotional moment was when eight-year-old Elizabeth Soffe was being presented with an award.

Elizabeth raised over £200,000 for the hospital that saved her life. The young girl was left with third-degree burns over 70% of her body after a cot fire at six months old. 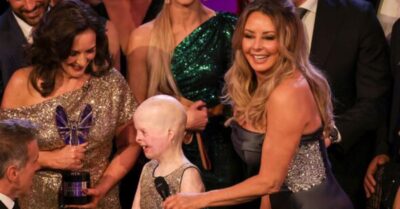 Taking to his Instagram page, Strictly judge Anton spoke about the honour he had of presenting Elizabeth’s award with Shirley Ballas and other dance stars.

He wrote: “An absolute honour to present the wonderful, inspirational Elizabeth Soffe with her Child of Courage award at this year’s Pride of Britain Awards.

“Such an incredibly special and brave young girl – and a privilege for us all to share the stage with her to celebrate her remarkable fundraising for Birmingham Children’s Hospital. Elizabeth, my love, it’s a 10 from all of us! Anton.”

In the photos, an emotional Anton can be seen kneeling down and hugging Elizabeth on stage.

During the stage moment, Anton also made a joke about Giovanni Pernice which made Elizabeth smile. 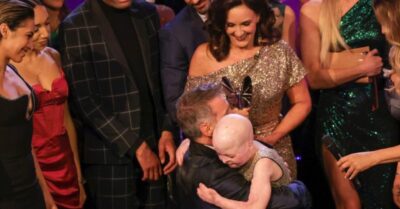 Many fans couldn’t help but comment about the sweet moment.

One person said: “What an amazing and beautiful young lady. I cried buckets for her. She is so right though – beauty really is on the inside.”

A second wrote: “Just flipping through these pics made me tear up. What a special moment.”

“Such an amazing little girl and I can’t think of any other two people more perfect to present her with her reward than you and @shirleybaallas. A definite lump in the throat moment,” another added. 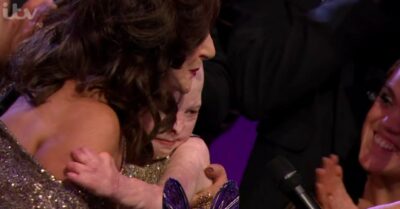 The Express reports that Shirley said about meeting Elizabeth: “Well, I think Anton and I were getting very teary backstage so we really had to kind of pull it together.

“And I would say meeting Elizabeth is so inspiring, she’s so courageous. She’s so lovely and I loved her little message of kindness. Everybody needs to be more kind to each other and I got a tear in my eye.”

He said that Elizabeth is “extraordinary to go through what she went through at such an early age”.

The judge added that Elizabeth’s “positive outlook and her sort of attitude about life is remarkable”.

Leave us a comment on our Facebook page @EntertainmentDailyFix and let us know what you think of this story.