Tragic photos have emerged of a young mom who lost her life when a dangerous TikTok challenge ended with a car crash in Buffalo that killed four teenagers and injured two others.

The Buffalo City Police Department said the crash happened around 6.30am Monday after the teenagers stole a Kia Sportage late on Sunday evening — after allegedly learning how to hotwire the car from a TikTok video.

All six people inside the car, apart from the driver, were ejected from the vehicle when it crashed.

Four of the passengers were killed, the eldest being 19, with one other passenger placed in intensive care.

Ahjanae Harper, 14, had recently given birth to a baby girl before loosing her life in the accident.

A student at Charter School for Applied Technologies, Harper leaves behind a five-month-old daughter. Harper's sister, Jayleen Hennessy, told WIBV that she always had a smile on her face.

The four teens killed have since been identified as Marcus Webster, 19; Swazine Swindle, 17; Kevin Payne, 16; and Harper — though photos of Swindle and Payne have not yet emerged.

Swindle’s sister, Nashira Anderson, said the young teen enjoyed playing basketball and was known for having a goofy personality. Webster was remembered as a hard worker who balanced a job and school.

The sixth passenger, another girl of 14, has been moved from the ICU to 'good condition' inside the Erie County Medical Center. Her name has not been released. 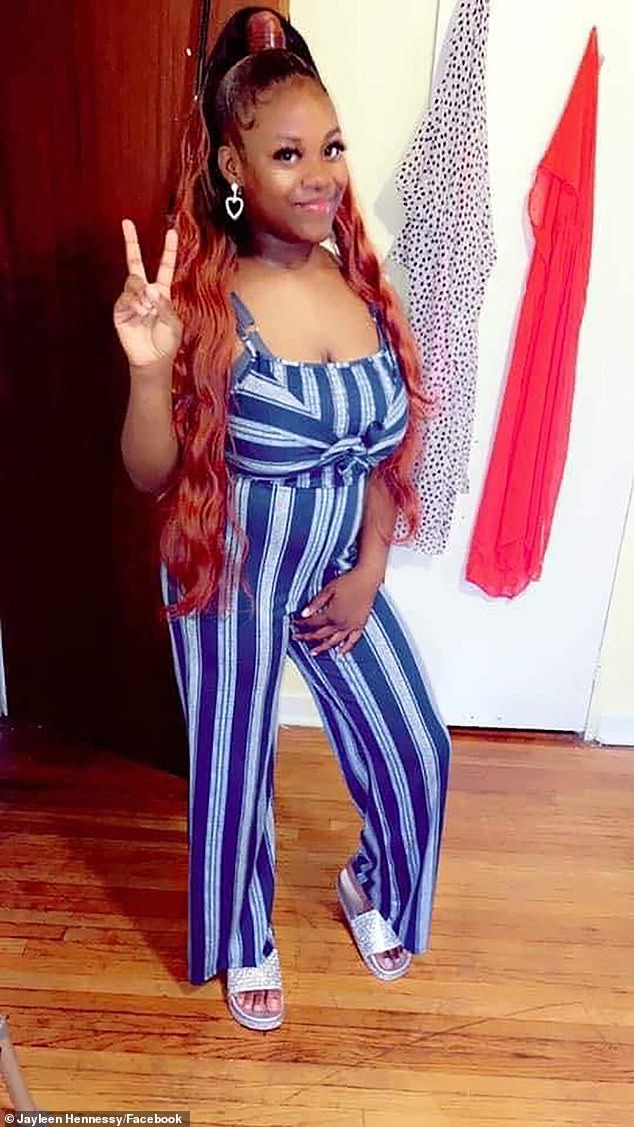 Six teenagers were riding in a stolen vehicle when the car crashed, ejecting all of the vehicle's passengers, except for the driver. Ahjanae Harper, pictured, was one of the teens killed in a Buffalo car crash 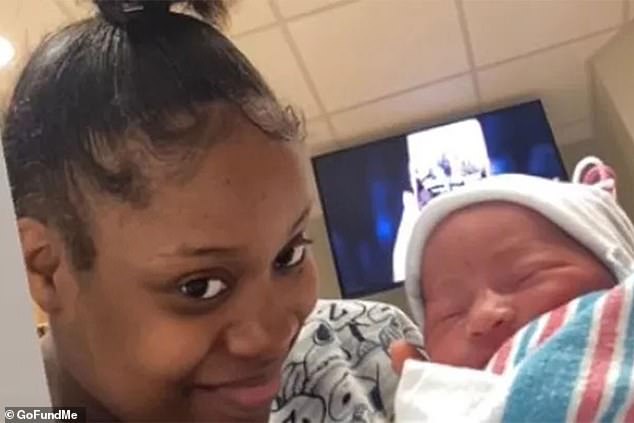 Harper, 14, had recently given birth to a baby girl before loosing her life in the accident 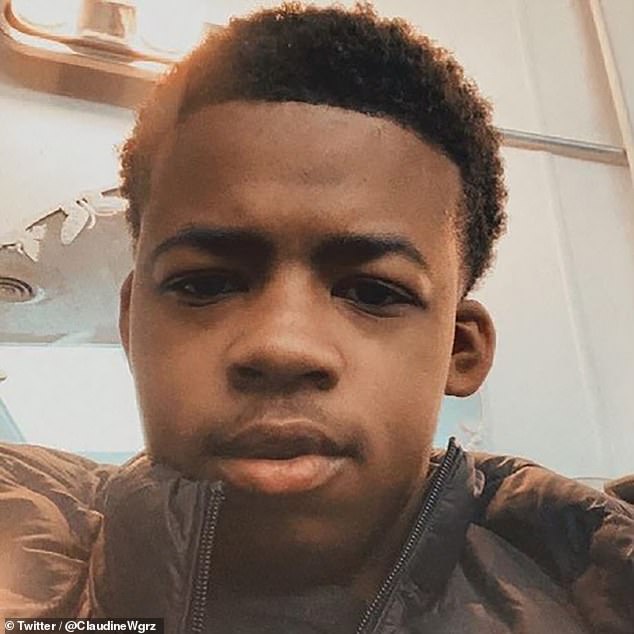 Marcus Webster, 19, killed upon impact, was known as a hard worker who balanced a job and school 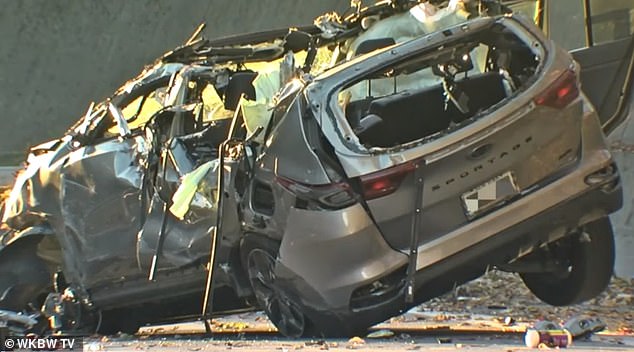 The 16-year-old driver was treated at a nearby hospital after the crash on Kensington Expressway and the Scajaquada Expressway.

Law enforcement officials said Monday that he has been charged with third-degree unauthorized use of a vehicle and fourth-degree criminal possession of stolen property.

The unidentified teen was issued an appearance ticket and is due to appear in court on November 15.

Family members of Harper have set up a GoFundMe to raise money for her funeral.

An investigation into the crash is ongoing, and further charges may be filed.

Buffalo Police Commissioner Joseph Gramaglia told reporters Monday that he believed the teens were participating in the trend that encourages people to break into vehicles.

The 'Kia Boyz' challenge requires just a USB cord and a screwdriver to hotwire Kia and Hyundai vehicles.

'It's a horrific morning for the families, their friends, our police officers and our investigators and fire department that were there investigating this,' said Gramaglia.

'This is a terrible, terrible outcome for such young kids that had their entire lives in front of them.'

Buffalo Public Schools said in a statement sent to WGRZ that the students involved in the crash went to Riverside High School and International Preparatory School. 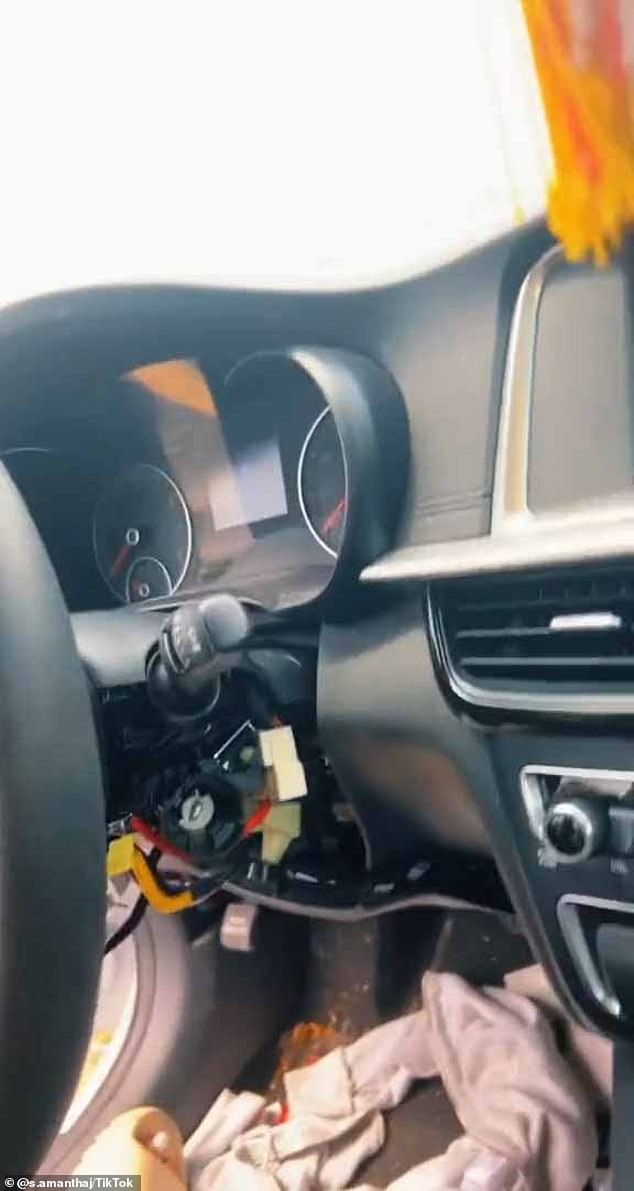 Charter School for Applied Technologies (CSAT) released a letter to parents and students Monday, as well, sharing the news that a former student had died in the crash.

'On Monday, an early morning automobile accident claimed the lives of several area teens, including a former CSAT student. Because this student attended our High School up until very recently, we have dispatched additional counselors and social workers to the building.

Law enforcement officials said that investigations will continue and further charges against the teen may be filed.

'It's an extremely sad morning in the city of Buffalo when you lose four young lives in a horrific accident like this,' said district attorney John Flynn.

'And now we need to do a thorough investigation to find out what happened and what the appropriate charges are against the driver of this vehicle,' Flynn said.

Engine immobilizers, anti-theft parts built into many cars, are missing from the cars made by Kia and Hyundai, according to a lawsuit filed in Orange County, California, earlier this year.

The suit alleges that Kias built between 2011 and 2021 as well as Hyundais built from 2015 to 2021 lack anti-theft parts, making the cars easier to steal than other models.

The lawsuit seeks monetary damages from the automakers and a nationwide recall.

DailyMail.com reached out to Buffalo Police Department officials who said that they could not share any additional details at this time, 'especially with a juvenile involved.'

The challenge, which users post to the social video site under #KiaBoyz, shows impressionable viewers using the tip of a phone charger or USB cable to start the cars. 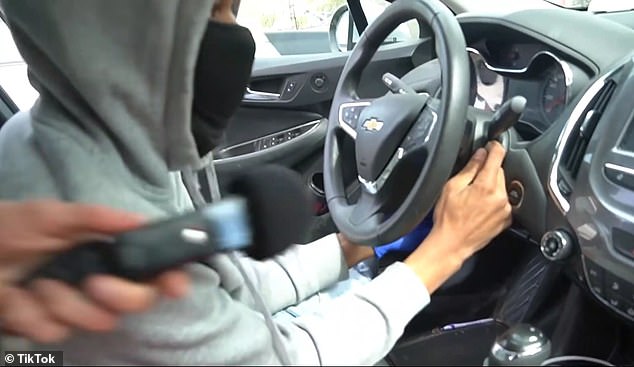 The issue is a particularly bad in Milwaukee, Wisconsin, where 'Kia Boyz' related thefts account for two thirds of the city's stolen cars 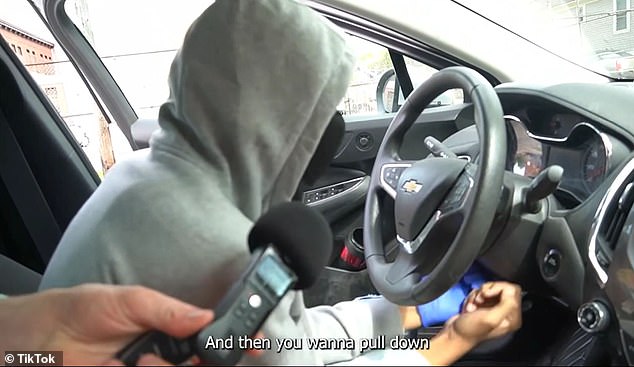 'These automobile thefts are a crime of opportunity and can affect just about any member of the community,' Chicago PD said in a statement.

In Portland, Oregon, thefts of Hyundais are up 153 percent while thefts of Kias are up 269 percent, according to city police.

In Columbus, Ohio, the two brands have made up 38 percent of all cars stolen in 2022, the New York Post reported.

Police in Charlotte, North Carolina, reported that car thefts were 30 percent higher than was typically the case at this time of year, with the majority of vehicles being Kias and Hyundais.

The issue is particularly bad in Milwaukee, Wisconsin, where 'Kia Boyz' related thefts account for two-thirds of the city's stolen cars.

It has gotten so bad in Milwaukee that authorities have advised Kia and Hyundai owners to buy steering wheel locks or to invest in more advanced security systems. 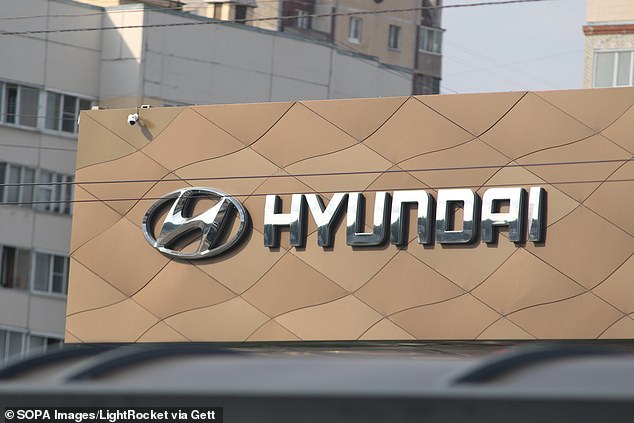 The Windy City has seen thefts of the two car brands rise by a shocking 767 percent since the beginning of July compared to the same period in 2021, according to Chicago police 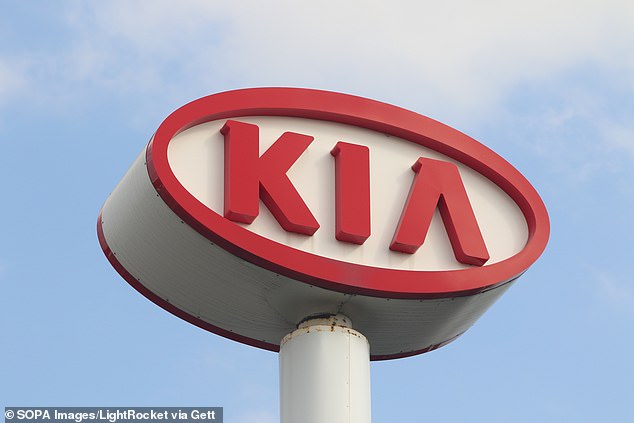 Chicago has become the latest city victimized by the latest TikTok challenge, which shows how you can start Kia and Hyundai cars using only a USB cable

Moore said at the time that the TikTok trend may be a major contributing factor.

During a police commissioners meeting, Moore said that more than 1,600 Kia and Hyundai vehicles had been stolen throughout the year, pointing to the 'Kia Boyz' challenge.

'For the community, the challenge of owning one of these vehicles, we're asking that you purchase a steering wheel lock,' Moore said.

'You can also install an alarm system. The steering wheel lock will offer both a visual and physical deterrent from someone trying to break your glass and into your vehicle,' Moore continued. 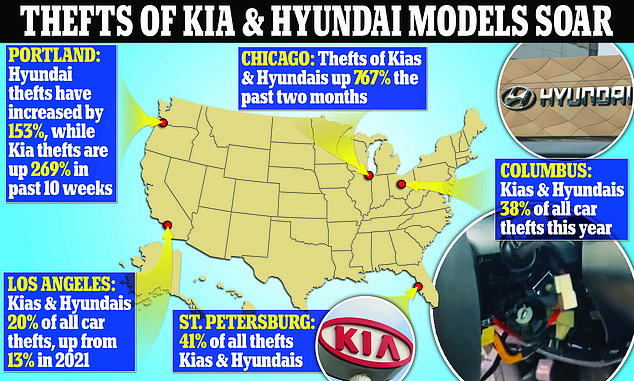 ABC 7 spoke with one resident who had his own 2012 Hyundai Tucson broken into it, which he caught on video.

'The scary part is that, as far as I can tell, this started from a TikTok challenge, which shows the power of influence that social media can have especially on young folks,' the man told the ABC affiliate.

In a statement issued at the time, a Hyundai spokesperson said:

'Hyundai Motor America is concerned with the rise in local auto thefts. The safety and well-being of our customers and the community is and will remain our top priority. These vehicles meet or exceed Federal Motor Vehicle Safety Standards and engine immobilizers are standard equipment on all new Hyundai vehicles.'

James Bell, a Kia spokesperson, said vehicles that are turned on with a steel key are being targeted.

'Kia America is aware of the rise in vehicle thefts of a subset of trim level vehicles. All 2022 models and trims have an immobilizer applied either at the beginning of the year or as a running change. All Kia vehicles for sale in the US meet or exceed Federal Motor Vehicle Safety Standards.'

TikTok, when confronted with the videos by WHIO, said: 'We absolutely do not condone these types of videos and it is something that is being removed from our platforms. We use a combination of technology and dedicated safety teams to ensure that our content aligns with TikTok Community guideline.' 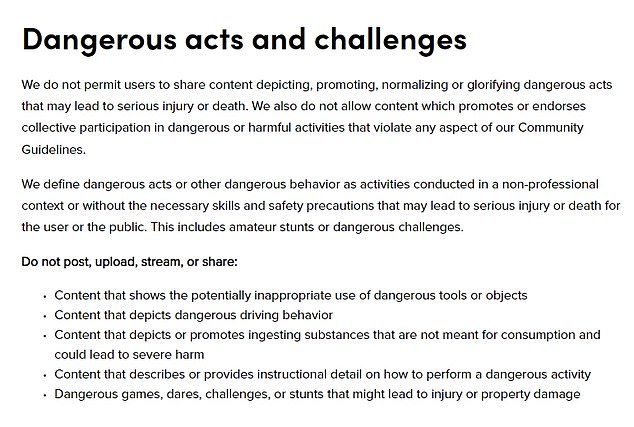 On dangerous challenges, TikTok says: 'We do not permit users to share content depicting, promoting, normalizing or glorifying dangerous acts that may lead to serious injury or death' 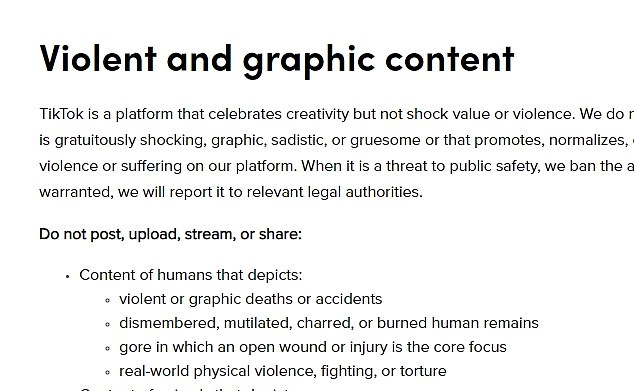 And in the violent and graphic content part, it adds: 'TikTok is a platform that celebrates creativity but not shock value or violence'

TikTok has come under fire in recent months for exposing teenagers to dangerous trends including 'rape culture' and a vile 'blackout challenge' that has killed youngsters.

The social media giant has failed to strip down misogynistic comments by former kickboxer Andrew Tate, footage of thugs stealing KIAs and Hyundias, and content encouraging children to asphyxiate themselves.

These all come despite the tech giant having extensive community guidelines spelled out on its website, including rules on dangerous acts and challenges, hateful behavior, and against promoting suicide or harm.

But it could soon be held more accountable across the US for content on the site under the Combating Harmful Actions with Transparency on Social Act.

The bill seeks to combat dangers to children and boost transparency into how apps are being used for crimes.