Eight teams were set to wear a rainbow armband at the World Cup in Qatar before FIFA stepped in to forbid it.

Although captains have worn an armband at least as far back as the 1966 tournament, is not normally an article of kit which attracts that much attention.

This week’s controversy may go to be tested in the Court of Arbitration for Sport (CAS) but it is not the first time that armbands have caused controversy at a global event.

The 2003 ICC World Cup was mostly staged in South Africa, but matches were also held in Kenya and Zimbabwe. It was the prospect of matches in the latter that caused the flashpoint, because the host nation was in a state of domestic crisis.

The country was ruled by Robert Mugabe who had served first as Prime Minister and then as President of Zimbabwe. He had even been invested with the Olympic Order by the International Olympic Committee (IOC).

On this day in 2003, Andy Flower and Henry Olonga defied Robert Mugabe's regime by wearing black armbands to mourn "the death of democracy". It was perhaps the bravest act of defiance ever seen on a cricket field.

Zimbabwe's cricket team had first taken part in the final stages of the men's cricket World Cup in 1983.

They defeated Australia by 13 runs at Trent Bridge, a performance which helped pave the way for Zimbabwe's acceptance in cricket's international elite as a top-ranking Test match and one-day international side.

But by the early years of the new millennium, an increasingly authoritarian regime had left many in the country feeling threatened by restrictions on free speech and human rights.

Sanctions on Zimbabwe had been imposed by the European Union. The British Government, then led by Prime Minister Tony Blair, registered concerns about England playing there during the ICC World Cup.

The Zimbabwe Government's policy for the reallocation of farmland caused further tension.

This was sometimes carried out by so-called "war veterans" using violence and intimidation.

It was after a conversation with a farmer he knew that Zimbabwean cricket star Andy Flower conceived the idea of the protest with the armbands. 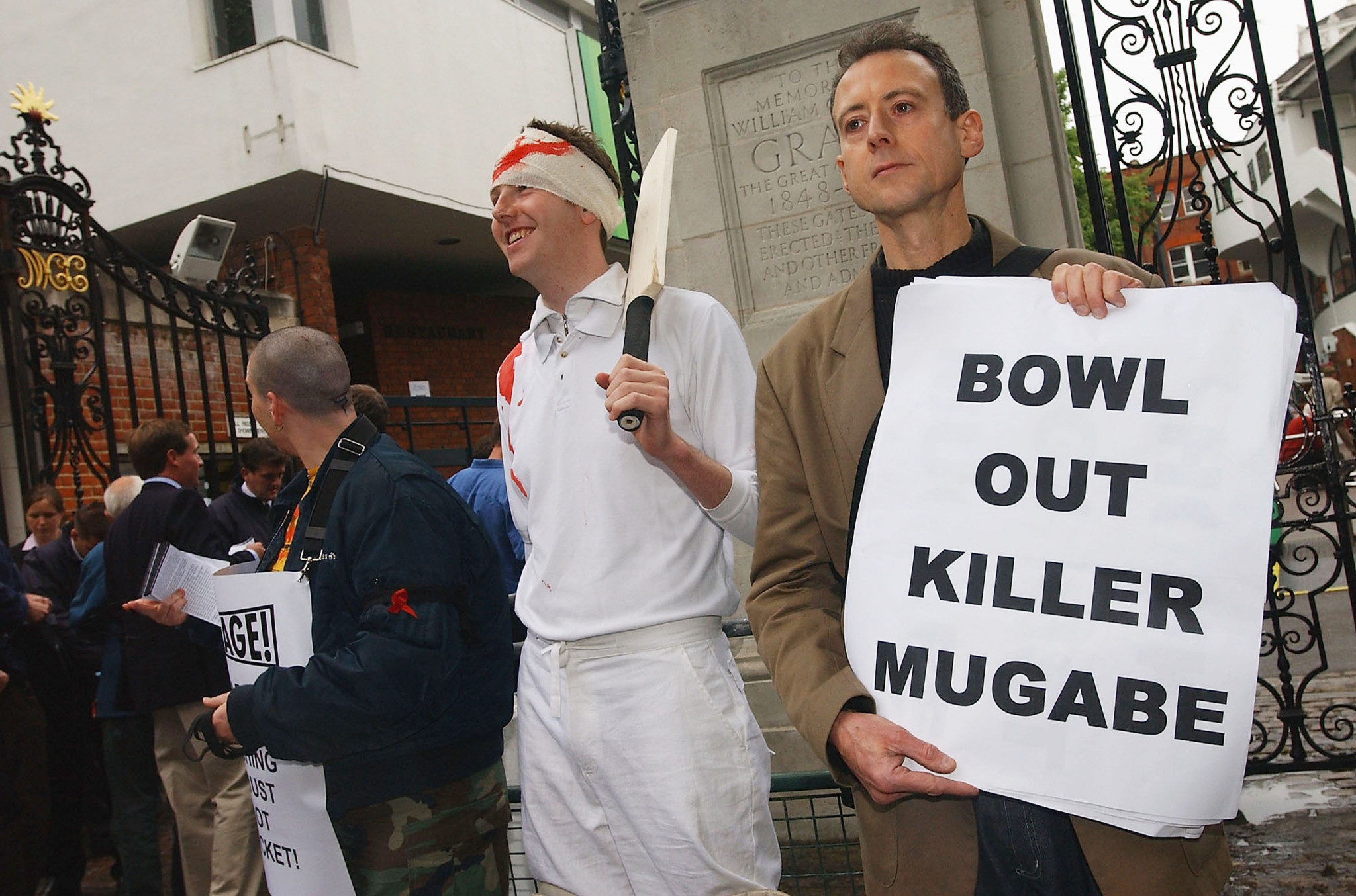 Activist Peter Tatchell, right, was amongst protesters against Robert Mugabe's regime and has also protested in Qatar this week ©Getty Images

"The phrase he used was, you guys have a moral obligation, not to go about business as usual during the 2003 World Cup," Flower told the BBC almost a decade later.

Flower, an outstanding performer with the bat, had played 63 Test matches and more than 200 one-day internationals.

He revealed many years later that he had not thought it possible to involve the entire team in the protest.

He decided to ask fast bowler Henry Olonga to join him him to reflect the diversity of feeling in supporting the action.

"I knew what I was getting involved in and I believed with all my heart and I still believe in it today," Olonga later the BBC.

Flower consulted David Coltart, a lawyer who suggested the armbands.

Flower and Olonga wore the black armbands on the sleeves of their shirts in Zimbabwe's first match of the tournament against Namibia.

"We are making a silent plea to those responsible to stop the abuse of human rights in Zimbabwe," a statement prepared by the pair read. "We pray that our small action may restore sanity and dignity to our nation."

The pair had said that they "could not in good conscience take to the field and ignore the fact that millions of our compatriots are starving, unemployed and oppressed". 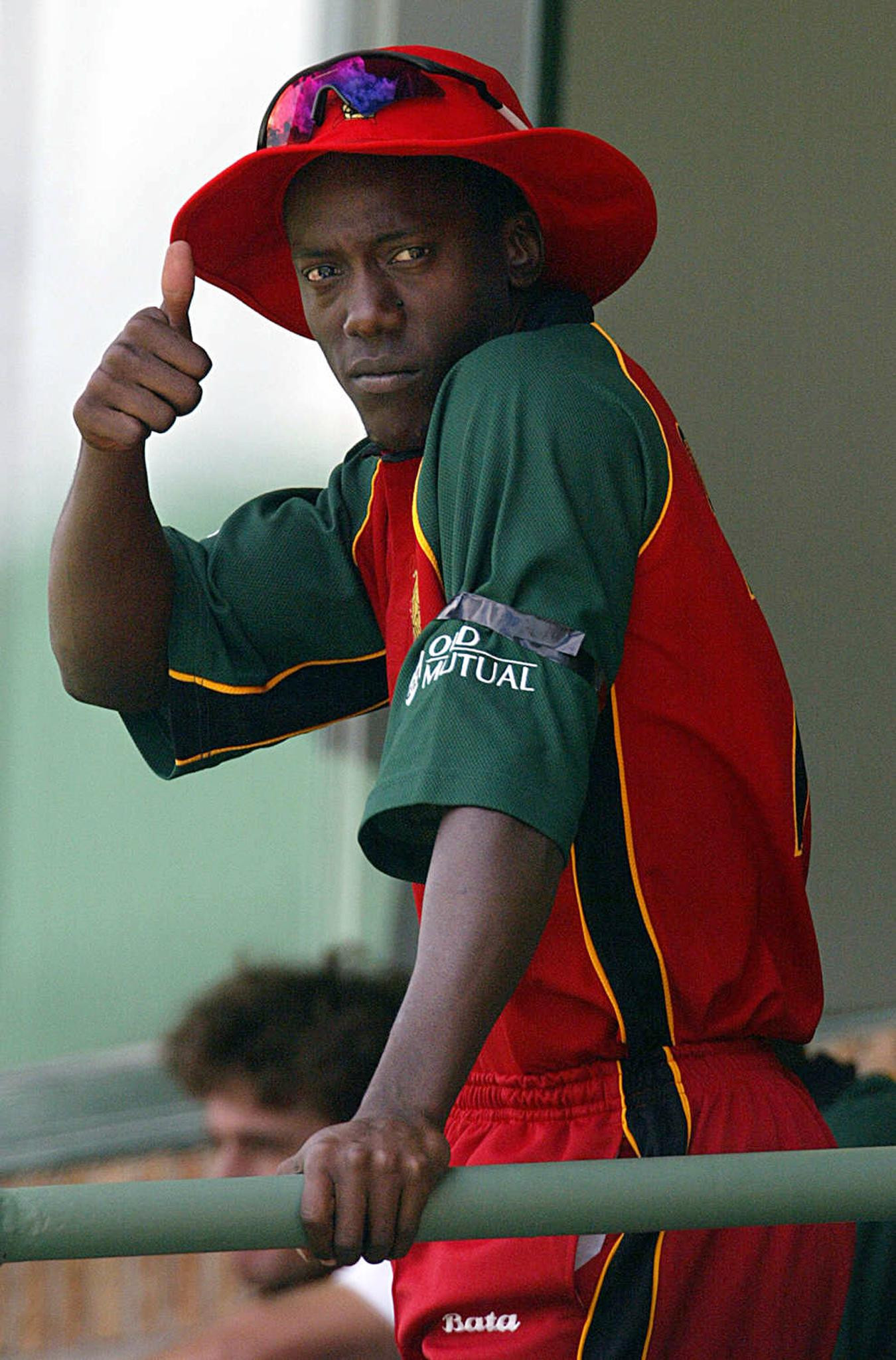 Newspaper reports at the time asserted that the Zimbabwe team was "100 per cent behind Andy and Henry."

In the match itself, Zimbabwe beat Namibia by 86 runs on the Duckworth-Lewis system.

Many of the 4,000 crowd were also reported to have been supportive of the protest but a businessman who wore a black armband was arrested by police.

"Every now and then, amidst the gloom of our present darkness, a small light will shine reminding us of the principles and courage still out there," the late Iden Wetherell, then editor of the Zimbabwe Independent newspaper, wrote.

"Just when we needed people to stand up and be counted in the struggle for freedom and justice, Andy Flower and Henry Olonga stepped forward, now others need to follow their lead," he continued.

The Zimbabwe Cricket Union, which listed Mugabe as a patron, immediately reported the pair to the ICC.

In addition, Olonga's club Takashinga summoned him to a disciplinary hearing.

"It is disgraceful what Henry Olonga and Andy Flower have done," club chairman Givemore Makoni said.

"Taking politics onto the sports field is a thing that the ICC have been trying to avoid," Makoni added. "The club’s code of conduct is non-political and it is quite clear that all its members must refrain from making statements that are political."

It was expected that Olonga would be suspended, effectively rendering him ineligible for the national team. 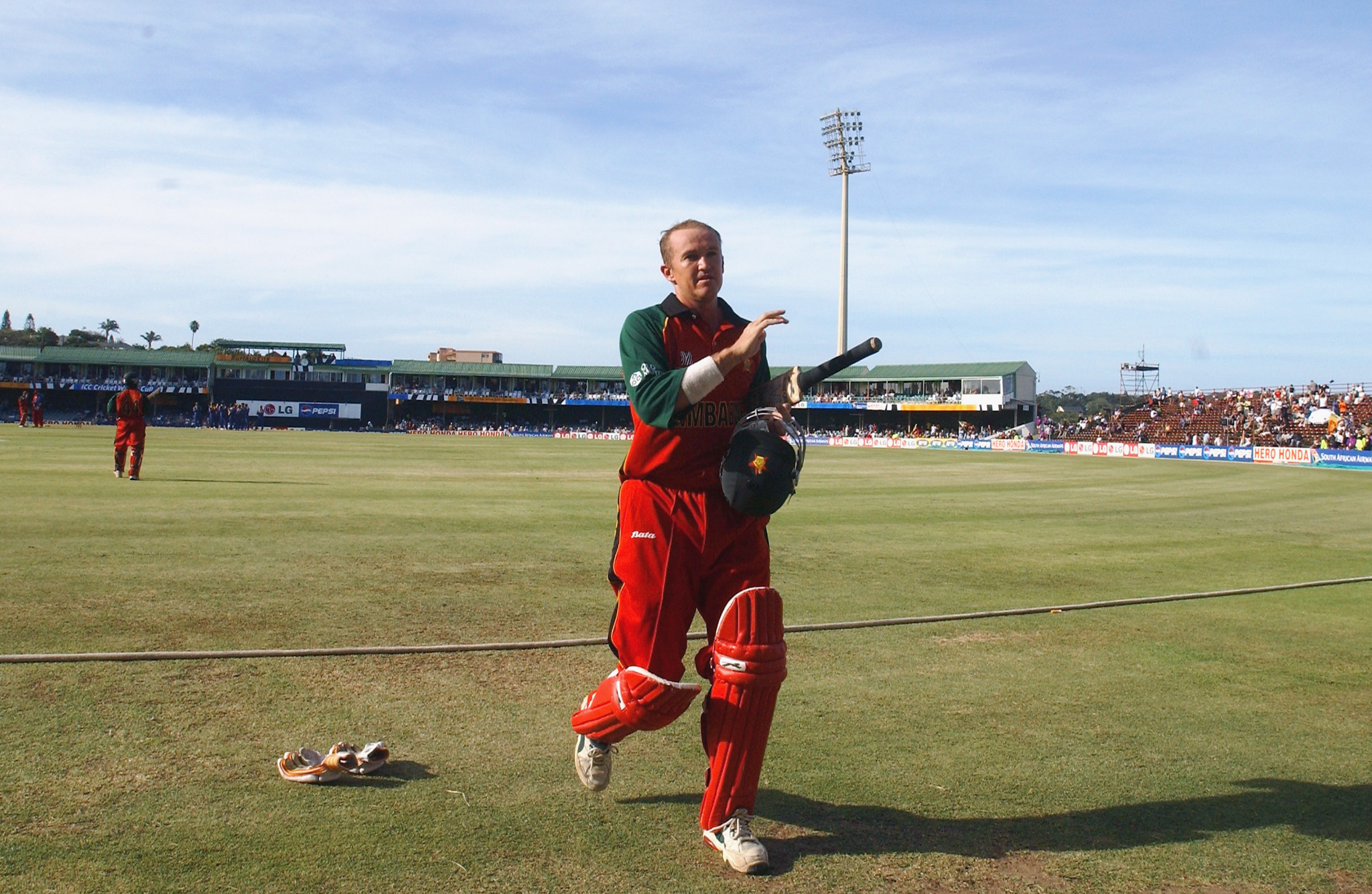 "In the face of wickedness, my stand is that I am simply doing my duty as a Christian,” Olonga told The Observer newspaper in London.

Olonga also expressed his support for England captain Nasser Hussain who had called upon organisers to move the Zimbabwe-England match to a venue in South Africa.

Hussain described an England team meeting that decided not to play in Zimbabwe as "emotional and heated".

The players were shown Mugabe's Secret Famine, a film about Zimbabwe’s plight by the journalist Peter Oborne.

In January, the England and Wales Cricket Board had received a letter purporting to come from a group called the "Sons and Daughters of Zimbabwe".

This had contained death threats but the players were not told about this until shortly before the tournament began.

"This is the most traumatic thing I have ever seen a group of cricketers go through," Professional Cricketers' Association managing director Richard Bevan said.

The match between Zimbabwe and England never did take place. The ICC awarded maximum points to Zimbabwe.

Partly as a result, England were eliminated from the tournament.

Zimbabwe were eventually knocked out after their defeat against Sri Lanka in the "Super Six" phase. Flower announced his retirement from international cricket.

Olonga did the same, indicating it would be "too dangerous" to return to his homeland. He revealed that he had received death threats.

It wasn’t about making a political statement – human rights are non-negotiable. That should be taken for granted, but it still isn’t the case. That’s why this message is so important to us.

Denying us the armband is the same as denying us a voice. We stand by our position. pic.twitter.com/tiQKuE4XV7— Germany (@DFB_Team_EN) November 23, 2022

"If I were to continue to play for Zimbabwe, I would be condoning the grotesque human rights violations that have been perpetrated and continue to be perpetrated," Olonga explained.

"We must be strong, stand united, and strive to give our children the brighter day to which they belong," he declared.

Both men emigrated and Flower later played for Essex in the English County Championship before eventually coaching the England team.

IOC member Kirsty Coventry later suggested that both might have regretted their action.

"I don’t want to speak on their behalf but obviously what happened after that with them, not necessarily playing for Zimbabwe, I think if they were to look back now, they would say maybe they would have done things slightly differently," Coventry insisted. 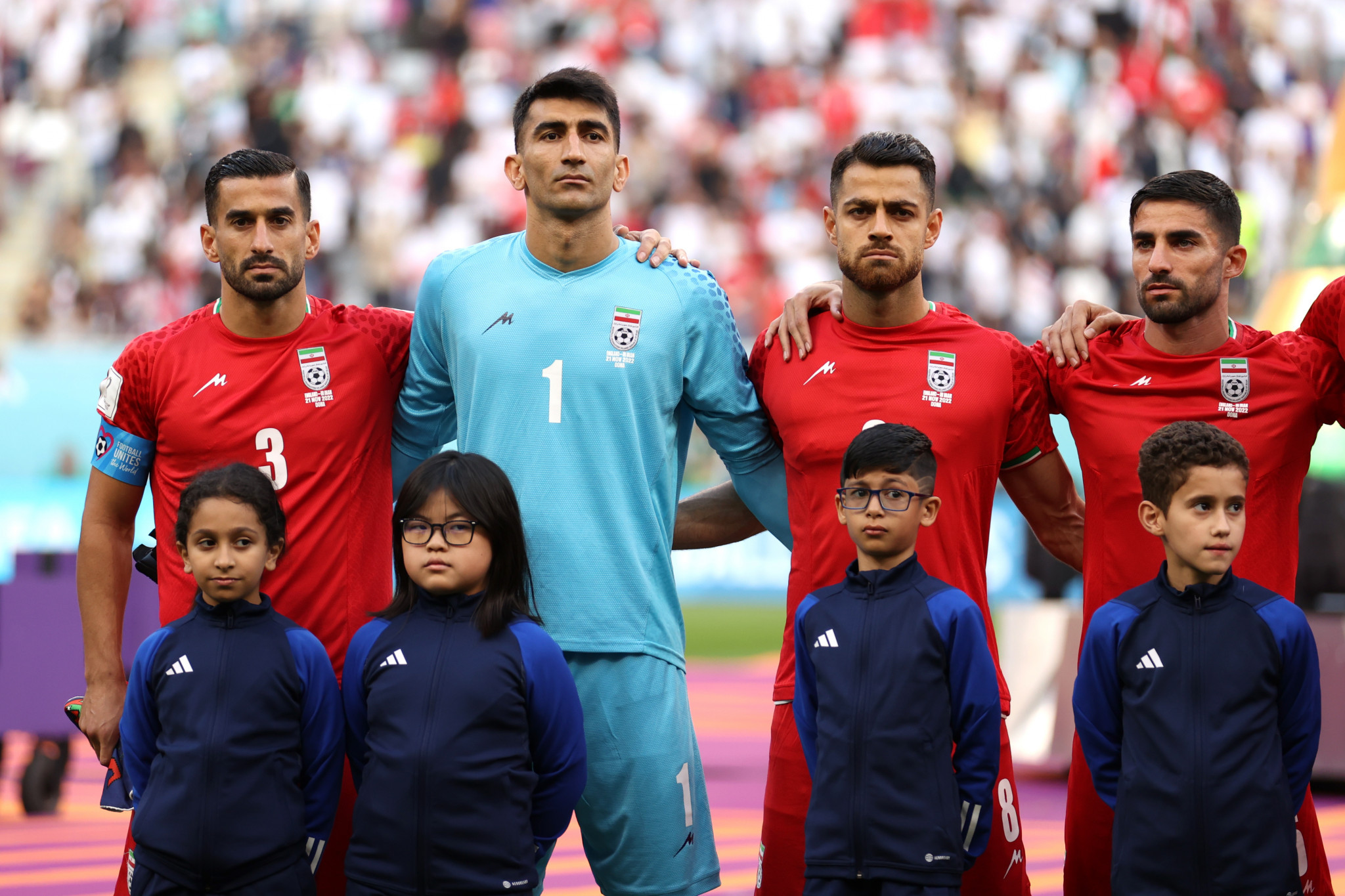 Earlier this week before their opening match against Japan, the German football team posed for the team photograph with hands over their mouths to "convey the message that FIFA is silencing us", German coach Hansi Flick explained.

They have been in discussions about tabling an appeal to the CAS which could yet enable the armband to be used against Spain on Sunday (November 27).

Before their match against England on Monday (November 21), the Iranian players remained silent during the playing of the national anthem, apparently to register support for protests in Iran.

There have been protests in Iran since September when Mahsa Amini died in Police custody. She had been arrested for not wearing a hijab in a manner the so-called morality police approved of.

Human rights groups claim that over 400 have died and a further 16,000 arrests have been made in Iran during the protests.

"We have to accept that the conditions in our country are not right and our people are not happy," Iran’s captain Ehsan Hajsafi said.

It was a statement made in the same courageous spirit as the protest by Flower and Olonga almost 20 years ago.