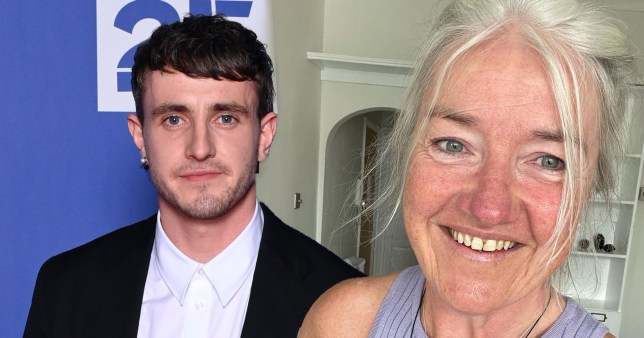 It was announced on Tuesday that Paul Mescal had snagged a best actor Oscar nomination for his role in Aftersun and his mum has now spoken out (Picture: Rex/Instagram/@dearbhlam)

Paul Mescal’s mum Dearbhla has shared an insight into what it was like finding out her son had been nominated for film’s most prestigious award.

It was announced on Tuesday that 26-year-old Paul had snagged a best actor Oscar nomination for his portrayal of Calum in Aftersun.

But Dearbhla has revealed she found the nomination reveal ceremony too ‘stressful’ to watch and was folding washing when she learned of her son’s nod via WhatsApp.

Paul is the eldest of three siblings and Dearbhla and her husband (also called Paul) are also doting parents to daughter Nell and son Donnacha.

‘We’re very blessed, Donnacha was in New York, sitting in his office, Nelly was in London, she went straight to his flat,’ Dearbhla said of how her family reacted to the news.

‘It’s an honour to watch him in this arena, I’m emotional a lot today,’ she added to RTE.

Dearbhla has revealed she found the nomination reveal ceremony too ‘stressful’ to watch (Picture: Instagram/@dearbhlam)

‘The fact that I got to see their three faces today, the love they have for each other as siblings is second to none, I’m very happy.’

Paul’s dad told the outlet: ‘[The Oscars] was always such an occasion and even with Irish people like Brenda Fricker and Liam Neeson and all those people and now for our child to be to be in with those.’

Spotted in the corner of a screenshot uploaded by his musician sister Nell, the star was beaming as other members of the virtual call appeared overjoyed.

Paul plays Calum in Aftersun, which follows the actor’s character and his on-screen daughter Sophie during a holiday in Turkey (Picture: AP)

In a series of tweets, Nell reacted to the news her brother could be receiving his very first Oscar next month and shared her emotional overwhelm at the revelation.

Alongside the grab from a group call, the younger Mescal posted a crying emoji and admitted she couldn’t upload the actual video as she was crying ‘ugly’ tears.

‘i am so proud it is making me sick [sic]’, she penned and went on to say: ‘how on earth did this happen?’

Nell also revealed the sad news of her mother’s upcoming chemotherapy treatment amid the Oscars chaos: ‘my mum got a haircut today in prep for her chemotherapy and then paul got nominated for an oscar life is so crazy [sic].’

Paul has since reacted to the news in a statement that read: ‘This is truly a special moment for everyone involved in Aftersun.

‘To be recognised by the Academy is such an insane honour and I’m so utterly grateful.

‘I want to dedicate this nomination to my two friends Charlotte and Frankie who I love dearly! This is bananas, thank you!’

The Normal People star was nominated for best actor in a leading role alongside fellow Irishman Colin Farrell for his part in The Banshees of Inisherin, Elvis star Austin Butler, Brendan Fraser for The Whale and Living’s Bill Nighy.

Here are the nominations for the 95th Oscar Awards:

Best motion picture of the year

All Quiet on the Western Front
Avatar: The Way of Water
The Banshees of Inisherin
Elvis
Everything Everywhere All at Once
The Fabelmans
Tár
Top Gun: Maverick
Triangle of Sadness
Women Talking

Performance by an actor in a leading role

Performance by an actor in a supporting role

Performance by an actress in a leading role

Performance by an actress in a supporting role

Applause from Tell It like a Woman, Music and Lyric by Diane Warren
Hold My Hand from "Top Gun: Maverick, Music and Lyric by Lady Gaga and BloodPop
Lift Me Up" from Black Panther: Wakanda Forever, Music by Tems, Rihanna, Ryan Coogler and Ludwig Goransson; Lyric by Tems and Ryan Coogler
Naatu Naatu from RRR, Music by M.M. Keeravaani; Lyric by Chandrabose
This Is A Life from Everything Everywhere All at Once, Music by Ryan Lott, David Byrne and Mitski; Lyric by Ryan Lott and David Byrne

All Quiet on the Western Front
Bardo, False Chronicle of a Handful of Truths
Elvis
Empire of Light
Tár

Babylon
Black Panther: Wakanda Forever
Elvis
Everything Everywhere All at Once
Mrs. Harris Goes to Paris

The Elephant Whisperers
Haulout
How Do You Measure a Year?
The Martha Mitchell Effect
Stranger at the Gate

The Banshees of Inisherin
Elvis
Everything Everywhere All at Once
Tár
Top Gun: Maverick

Achievement in makeup and hairstyling

All Quiet on the Western Front
The Batman
Black Panther: Wakanda Forever"Elvis
The Whale

All Quiet on the Western Front
Avatar: The Way of Water
Babylon
Elvis
The Fabelmans

The Boy, the Mole, the Fox and the Horse
The Flying Sailor
Ice Merchants
My Year of Dicks
An Ostrich Told Me the World Is Fake and I Think I Believe It

All Quiet on the Western Front
Avatar: The Way of Water
The Batman
Elvis
Top Gun: Maverick

All Quiet on the Western Front
Avatar: The Way of Water
The Batman
Black Panther: Wakanda Forever
Top Gun: Maverick

MORE : Joe Cornish reveals why The Adam and Joe Show wouldn’t get made today

You can follow our new Snapchat show Pop Cultur’d, the go-to place for all things pop culture.

Keep up with the latest Showbiz exclusives by following Metro Showbiz on Snapchat.

And football fans can indulge in all the transfer gossip and more on Metro Football on Snapchat.