A Saint John mother is questioning the fairness and legality of a decision by school staff to keep her son who has autism home for weeks and reducing his classroom hours.

It was 2 p.m. on Oct. 3 when Erin McCavour received a call asking she leave work to pick up her 10-year-old son Preston from Saint Rose School after he hit another student during gym class.

According to principal Victoria Moseley in an email to McCavour the following day, her son's "increasingly unsafe" behaviour had prompted staff to contact Anglophone School District South and the Saint John Police Force about doing a "violent risk threat assessment" on him.

"He will remain out of school until the assessment is complete and steps are put in place, at which point I will inform you of the plan," Moseley said, in the email shared with CBC News.

After nearly a month of waiting, McCavour received an email from Moseley on Wednesday evening saying her son could return Monday, but just for half-days the first week.

"I think, 'OK, you just took this child's education away for almost a month now to come up with this solution. Why did it take so long?'"

Upon his return Monday, Preston will receive one-on-one support away from "the common learning environment," said Moseley, in her email on Thursday.

"He's done well more than his punishment, and why does he not get to come back to school and return to class with his peers?" McCavour said.

"For the next month, that we know for sure... he will be just stuck one-on-one with an adult, basically like school jail, I think."

CBC News asked Anglophone School District South the circumstances under which schools can send students home, and for how long.

Spokesperson Jessica Hanlon said superintendent Zoë Watson wouldn't be available to comment, and directed CBC News to the Department of Education's Policy 703, which deals with creating a "positive learning and working environment."

The policy lays out examples of inappropriate behaviours and misconduct, such as bullying, physical violence and uttering threats, along with the consequences for violating it. 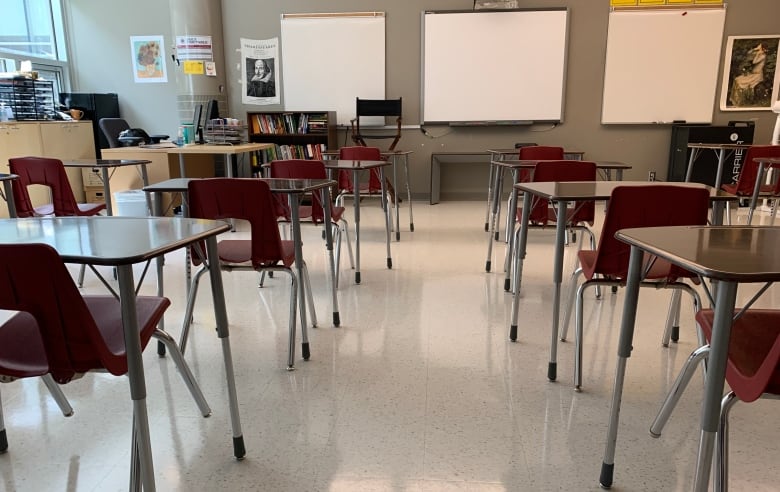 Anglophone School District South declined to comment, but pointed CBC News to the Department of Education's Policy 703, which deals with creating a "positive learning and working environment." (David Bajer/CBC)

It also says a student sent home will be permitted to return once safety can be assured following an assessment under the Violent Threat and Risk Assessment Protocols, or other relevant procedures.

CBC News also asked the Department of Education for comment, and in an email, spokesperson Morgan Bell said the Education Act outlines reasons for which a student can be suspended, with five days the maximum length of a suspension.

"A student may also be taken out of school for a longer period of time if they were involved in a violent incident," Bell said.

In those cases, a violent threat risk assessment would be performed on them to ensure safety for all students.

Last week, New Brunswick child and youth advocate Kelly Lamrock told MLAs his office has been receiving reports that some schools in the province are illegally sending home children who they deem too difficult. 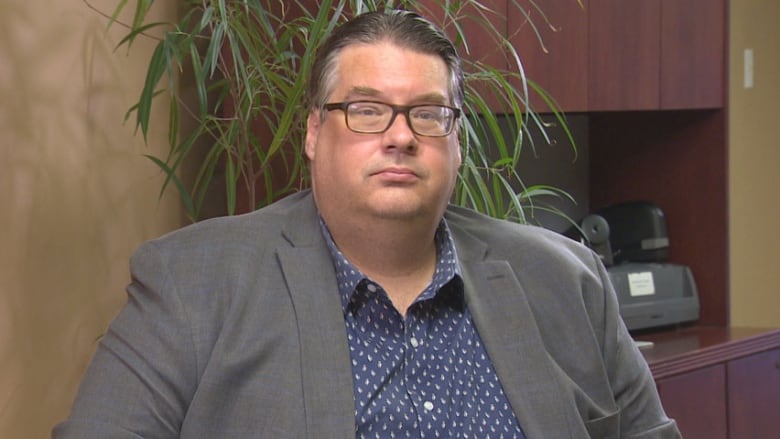 Child and youth advocate Kelly Lamrock told MLAs last week that his office is receiving complaints from parents saying their child is being sent home from school or being required to receive fewer instruction hours than their peers. (Pat Richard/CBC)

"The Education Act in Section 12 is absolutely clear. All children have a right to be in school when their peers are in school," said Lamrock, during the select committee meeting.

"If the school's open and kids are going, every child is receiving educational services."

Lamrock at the time did not specify whether those complaints involved students who exhibited violent behaviour.

Heidi Cyr, a spokesperson for Lamrock's office, said he doesn't comment on specific cases, and directed CBC News back to the presentation he gave a week earlier.

'They don't want to deal with them'

McCavour said her son has gotten into trouble previously for outbursts that come with him being on the autism spectrum.

She said support from an education assistant has typically helped him with those, but she noticed the school started calling her more and more about his behaviour last year.

With the latest episode, she said she understands the need to protect other students and staff from violent behaviour.

However, she thinks it was unfair to keep him away from school for so long, and doesn't think he should be separated from his peers once he returns.

"With autism comes aggression and... that's what he has, and I feel like they're just very quick to send them home because they don't want to deal with them," she said.

Tag: education, educational games, education synonym, education galaxy, education credit union. Anglophone School District South, Spokesperson Jessica Hanlon.
Related News
TikTok star Boogie B killed in New Orleans grocery store shooting
Self-medication with Antibiotics in PCPs in Palestine
Top Portage County high school sports memories from 2022
Most Anticipated Book Titles of 2023 From Around The World
‘I still have an uneasy feeling inside’: Spring ISD mother upset after she says her 5-year-old daughter was allowed to walk home alone
Q&A: Maulik Pancholy, Author of ‘Nikhil Out Loud’
WATCH: A news anchor was on-air when a shooting happened at her daughter's St Louis school
It Do Be Halloween Tho
Watch out for 'leakage': These are some of the clues students can look out for to help prevent school violence – KION546
An anchor was on-air when a shooting happened at her daughter’s school
Poor Children’s Social Skills Ruptured By Covid
Jay Mohr Net Worth: What Is His Awrads And Nominations?
Latest News
Rural Oxfordshire bus route to be saved which serves Witney
Sheffield United vs Wrexham - FA Cup: start time, TV channel, team news in fourth-round replay
Why is We love Jungkook trending on Twitter? Edited video controversy sparks fan backlash online
The Malta Gaming Authority has unveiled its refreshed brand identity at ICE London today
The all-female Street Angels keeping women safe on nights out in Barnsley
Police discount 'potential criminal element' of Nicola Bulley case
Casa Amor’s return date revealed as Love Island villa splits in two
Rescuers scramble in Turkey, Syria after quake kills 4,000
Maya Jama parties with pals in Dubai... but a bombshell is set to hit the villa
GMA’s Ginger Zee shows off new hairstyle and poses in skintight purple skirt in sexy new video on set of morning show
From a coaching change at Valencia CF to a long overdue, 10 things learned this week in LaLiga Santander
Mali: Meeting under “Any Other Business” : What's In Blue : Security Council Report
FIFA Club World Cup 2023: Teams, date, fixtures, live streaming channel
Hey Elon, no one cares about Twitter Blue
Who is Wendy Carlos? First transgender woman to win a Grammy