Earlier this month, LIV Golf CEO Greg Norman announced that the controversial series will be heading to Australia next year. Series officials confirmed Adelaide as one of the venues for LIV’s new 14-event schedule. Just days after this, LIV Golf claimed to have sold over 25,000 tickets.

According to reports, the Saudi-backed series has claimed to have sold the 25,000 tickets in the first 48 hours of the listing. Sports Illustrated reported that the sale of tickets for the LIV event in April in Adelaide, Australia, went live over the weekend. The report claimed that most of the tickets were bought by traveling fans.

One week after #LIVGolf Adelaide announcement, tickets are selling at a record pace.Details here ... 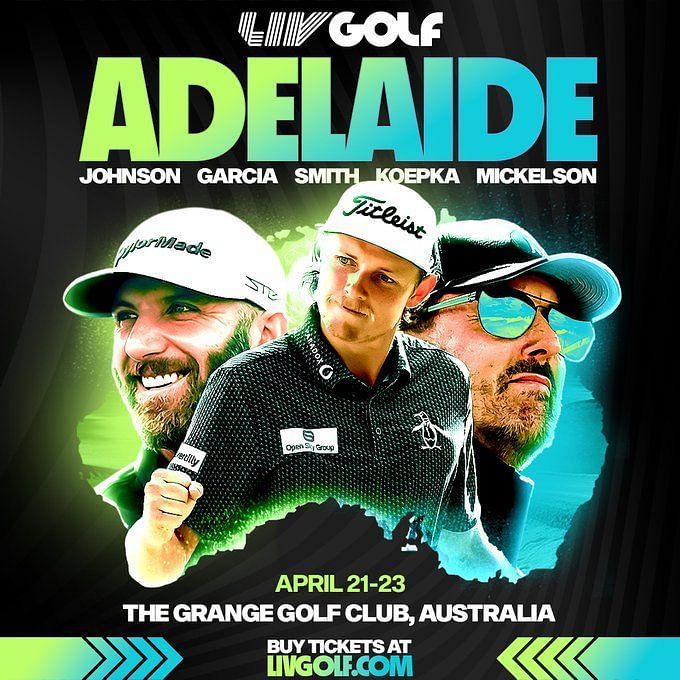 One week after #LIVGolf Adelaide announcement, tickets are selling at a record pace.Details here ...livgolf.com/news/tickets-f… https://t.co/itDc6Hsk8S

LIV Golf announced Adelaide as part of its new 14-event schedule, after a lot of speculation. With this, it became the first Australian-based LIV Golf event. South Australian Premier Peter Malinauskas also issued a ‘statement of intent’ claiming that 'The Wine State' was ready to host a major sporting spectacle in 2023.

Following this, LIV has reportedly sold 25,000 tickets (in record time) for the event. According to the Saudi-backed series, more than 60 per cent of the tickets have been bought by fans under the age of 45. They also claimed that tickets were purchased from countries outside of Australia including New Zealand, Fiji, Singapore, Indonesia and Thailand.

The high sales of LIV tickets is despite the series’ inability to land a broadcasting deal.

As per LIV Golf League officials, the Grange Golf Club in the South Australian capital of Adelaide will host the tournament from April 21 to 23, 2023. Through such moves, the series plans to grow an international fanbase.

We're excited to announce we are heading to Adelaide, Australia on April 21-23rd.

Help us spread the word and grab Early Birdie tickets before prices go up soon!

Get ready for #LIVGolf 2023!We're excited to announce we are heading to Adelaide, Australia on April 21-23rd.Help us spread the word and grab Early Birdie tickets before prices go up soon!

💪 Get ready for #LIVGolf 2023!🇦🇺 We're excited to announce we are heading to Adelaide, Australia on April 21-23rd. 🙌 Help us spread the word and grab Early Birdie tickets before prices go up soon! https://t.co/BUU9By0Cdv

The decision to include Australia in the schedule was announced by CEO and Aussie golfer Greg Norman. Dubbing it a ‘great country’ for the league to visit, he said, according to Golf Week:

“Passion for sport is at the core of Australian culture, and LIV Golf is proud to bring its global league to a country deserving of the world’s top competition."

“This is an opportunity to grow the game with generations of Australians while connecting them with star players like Cameron Smith who are building a new platform for golf around the globe. There is massive potential for Australia to play a bigger role in this great sport, and I couldn’t be more excited to showcase Adelaide for our league’s debut year.”

It’s pertinent to note that LIV has a strong connection with Australia considering many of the series’ stars are from the country. This includes world no.3 Cameron Smith, who will finally get to play on home soil following his defection to the rebel series.

For the unversed, the inaugural season of LIV was played across four countries. The series traveled to the United States, England, Saudi Arabia and Thailand. Having been introduced as a global stage for golf, LIV was bound to visit more countries. As of now, Australia is the first confirmed location on the series’ list for expansion.