If Paul wins, he and Silva have agreed to start a union for underpaid UFC fighters

Silva never earned more than $870,000 for any one UFC fight, per reports

Silva's purse for the fight remains unclear, but it could rival any he made in MMA

He didn't change the economics of the industry by out-boxing some ex-MMA fighters and 5-foot-9 former NBA star Nate Robinson.

Paul did, however, promote one of the most-watched women's boxing matches ever in April when Katie Taylor beat his fighter, Amanda Serrano, in a main event at Madison Square Garden. Both fighters would take home $1 million purses — until now, an unthinkable payday for women's boxers.


Now the YouTube star-turned boxer/promoter is cutting UFC legend Anderson Silva in on the profits.

'I think this could end up being one of Anderson's biggest paydays,' Paul told DailyMail.com of Saturday's pay-per-view cruiserweight boxing match against Silva in Glendale, Arizona.

It's too early to say how much Silva will take home from his fifth pro boxing match and his manager did not respond to inquiries from DailyMail.com. But Showtime has already announced that Saturday's bout is the highest-grossing boxing event in the Desert Diamond Arena's 19-year history. And if that's any indication of PPV sales, then Silva's take could rival or surpass any purse he earned as an MMA fighter.

'That's the goal, to get everyone I fight paid and everyone on my undercard paid the most amount they've ever been paid,' Paul said. 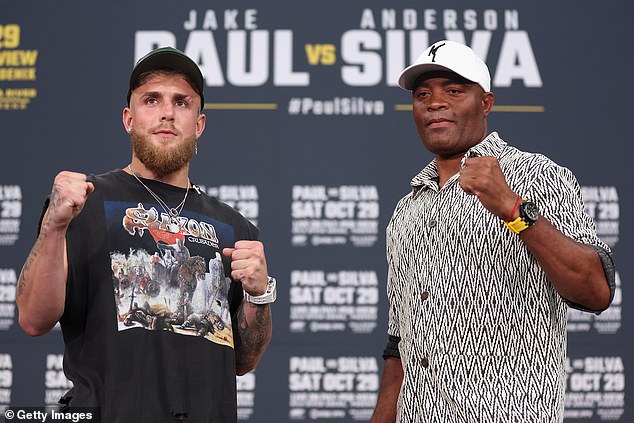 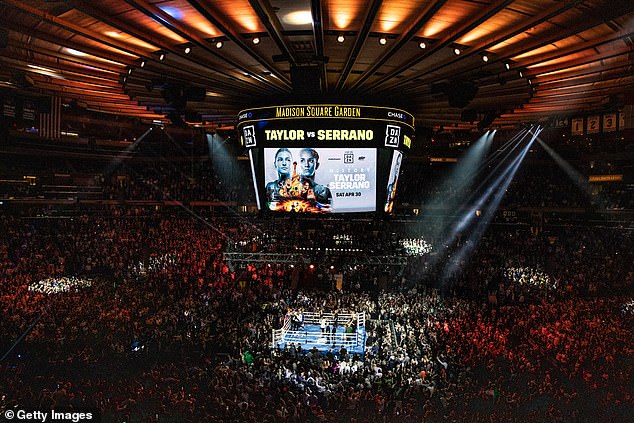 Paul promoted one of the most-watched women's boxing matches ever in April when Katie Taylor beat his fighter, Amanda Serrano, in a main event at Madison Square Garden (pictured). Both fighters would take home $1 million purses — until now, an unthinkable payday for women's boxers 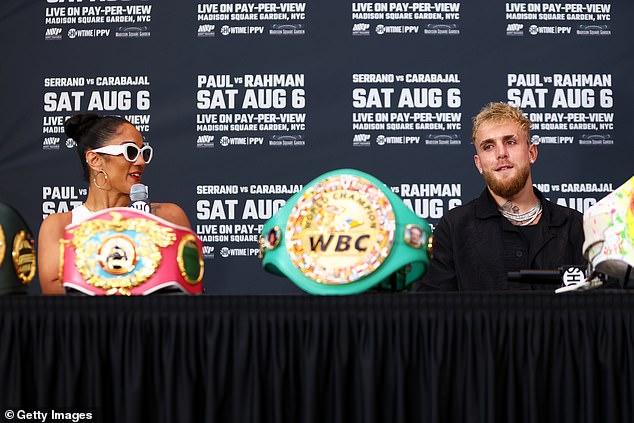 Paul (right) has signed one of the top women's boxers, Amanda Serrano (left), to MVP

The possibility of beating that now, as a 47-year-old boxer, does not reflect well on UFC president Dana White, who has long been criticized for underpaying his fighters.

'It doesn't make any sense,' Paul said. 'It shouldn't be that way, and there's a lot of UFC guys, who should be getting paid way, way more for their fights, and it's sad to see that they don't. The fighter minimum pay is so low, even the people lower in the company are just getting taken advantage of, so it's just a massive, massive problem.'

For comparison, an NFL player on the league minimum can clear more than $700,000 per season, or about $41,000 per game. Meanwhile, the UFC offers minimum fight purses of just $12,000 with the opportunity for another $12,000 bonus, according to Yahoo Sports.

Incredibly, UFC elites have been making more in their crossover fights into boxing.

Conor McGregor, arguably the biggest star in UFC history, reportedly earned as much as a $20 million fighting for White, but was paid a whopping $130 million for his largely unwatchable boxing match with Floyd Mayweather Jr. in 2017. 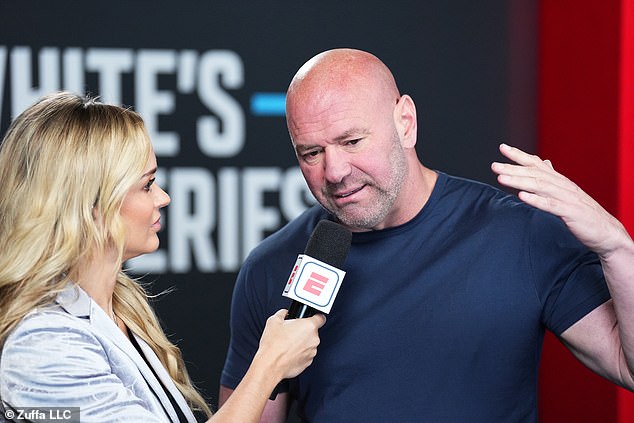 The possibility of beating that now, as a 47-year-old boxer, does not reflect well on UFC president Dana White (right), who has long been criticized for underpaying his fighters 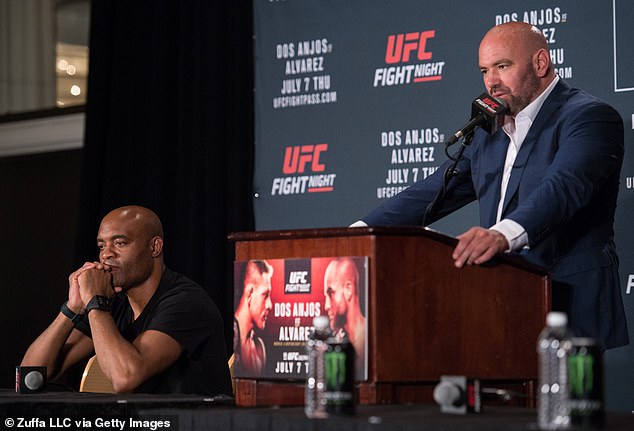 Silva stands to make more boxing now, at 47, than he did as one of the UFC's top attractions

And beyond creating some bad PR for the UFC, Paul has also used his rivalry with White to attract MMA fans to his boxing matches.

In fact, three of his five wins as a pro boxer have come against former UFC stars: a first-round TKO over Ben Askren as well as split-decision and knockout victories against Tyron Woodley.

What's more, Askren earned a reported $500,000 for his fight with Paul while both Woodley's paydays came in at a reported $2 million and $1 million, respectively.

For his part, Paul reportedly cleared seven figures for each of his bouts with Woodley, and another $690,000 for beating Askren in 2021.

Additionally, he would have made $1 million more had White honored his bet that 'Paul loses this f***ing fight.' (White mentioned the offer on Mike Tyson's Podcast, only to deny making that and another reported $2 million wager with Snoop Dogg)

Paul upped the ante in September, offering White a $5 million wager on Saturday's bout, but he never got an answer.

'I don't expect to hear from him,' Paul said of White. 'He's in hiding. He doesn't want anything to do with me.'

Instead of wagering against White for this bout, Paul extended another offer to Silva that seemed designed to antagonize the UFC President all the same.

'If you win, I will fight you in an MMA fight — OK, kickboxing — but if I win, me and you come together to create a united fighters' association to help UFC fighters get better pay and better healthcare,' Paul told Silva at Thursday's press conference. 'You become the interim president and we unite to help these fighters once and for all.' 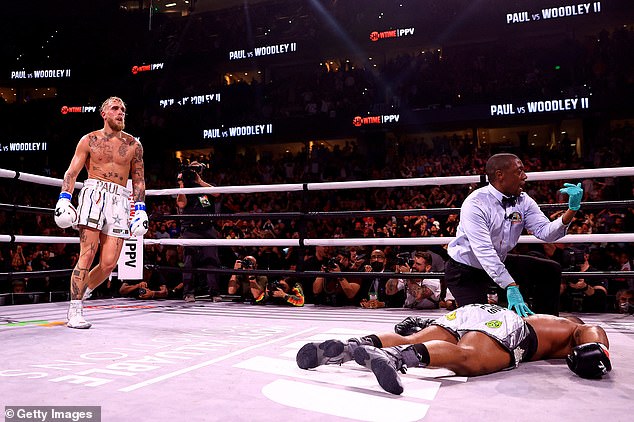 Jake Paul reacts to knocking out Tyron Woddley in the sixth round during an eight-round cruiserweight bout at the Amalie Arena on December 18, 2021 in Tampa 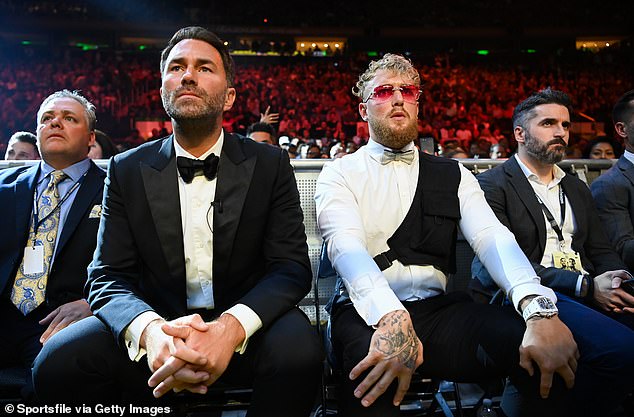 It's somewhat surprising that Paul's relationship with White has become so adversarial.

Before starring in the Disney Channel series, 'Bizaardvark,' or garnering billions of views on Vine and YouTube, the 25-year-old Cleveland native grew up as a UFC fan. He even has a childhood picture of himself and brother, Logan, with a young(er) Silva.

But since founding Most Valuable Promotions (MVP) with former UFC CFO Nakisa Bidarian, he's taken aim at White, accusing him of underpaying MMA fighters and even attempting to undermine Saturday's PPV broadcast, although he stopped short of going into details.

For what it's worth, Showtime Sports president Stephen Espinoza told MMAFighting.com that White's efforts to undermine Paul-Silva have been minor things, like denying the network access to footage of the Brazilian's UFC fights for Saturday's PPV broadcast.

But White was more direct in his condemnation of Paul back in August, when he told reporters to stop asking him about his young rival, whom he dismissed as irrelevant to his own work.

'Stop asking me about Jake Paul, you guys,' White told reporters . 'I don't give a s*** what Jake Paul does. I know you love this s***, and I know it gives you clicks, but come on.

'He has nothing to do with my business. He doesn't fight for me. He's not even in the same f***ing sport as me. I don't want to talk about him anymore.' 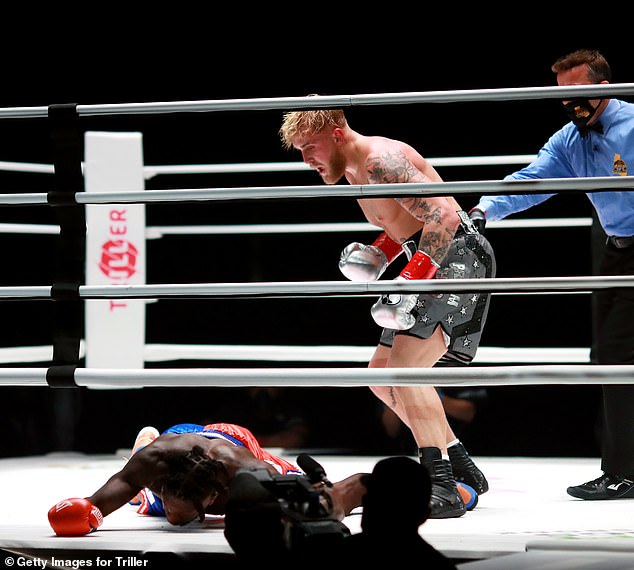 Jake Paul reacts over his knockout victory against Nate Robinson in the second round during Mike Tyson vs Roy Jones Jr. presented by Triller at Staples Center on November 28, 2020 in LA

The outburst played perfectly into the hands of Paul, who hasn't stopped talking about White.

'I'm bad for his business.'

Unsurprisingly, UFC spokespeople did not respond to DailyMail.com's request for comment on this article. 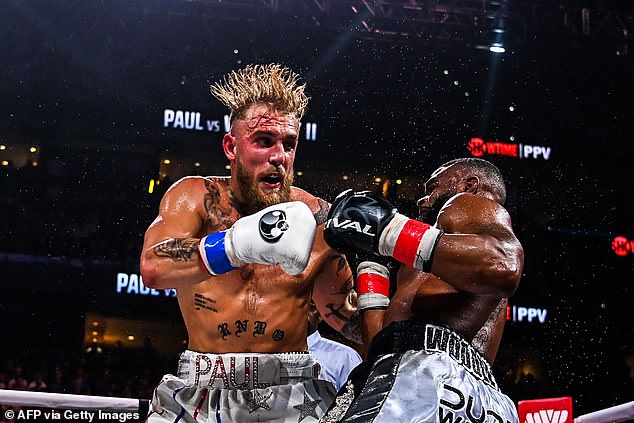 Paul's biggest challenge as a promoter has been making it to the opening bell.

In fact, Saturday's bout was briefly in jeopardy after Arizona's Boxing and MMA Commission decided to review Silva's eligibility following the Brazilian's admission that he was knocked twice out during training. Silva has since walked back those September comments, which surfaced this week, saying that he was only knocked down but never lost consciousness.

For Paul, it would have marked another in a series of canceled fights.

With his hopes of finally facing a real boxer momentarily dashed, Paul replaced Tommy Fury with Hasim Rahman Jr. — the son and namesake of the former heavyweight champion — only to have the fight canceled due to weight issues. Rahman, an experienced boxer with a 12-1 record, was reportedly struggling to get below the 200-pound cruiserweight limit.

The experience taught Paul to embrace the crossover fights, in which MMA fighters try their hand at boxing.

'I tried multiple times [to face an experienced boxer], and they wasted my time,' Paul said. 'They lost me millions of dollars each time. And so, it turns out these MMA fighters are actually down to fight and the boxers aren't, interestingly enough.'

As Paul explained, MMA fighters are less averse to risk than boxers, who would stand to lose significant future earnings if they fell to a former YouTuber. So rather than haggling with boxers, he's had more success coaxing MMA fighters into the ring, where their earnings stand to improve.

And if an MMA fighter loses a boxing match to Paul, it won't preclude them from booking future bouts.

'I think that in MMA, people normalize losing more,' Paul said. 'You can lose and come run back and make another run for the championship belt. And that's way more normal for the fans, for the fan base.

'There hasn't been the Floyd Mayweather of MMA,' Paul continued, referencing the legendary boxer who retired with a perfect 50-0 record. 'That is boxers' North Star, is to strive to be Floyd Mayweather and what he did. So there's this thing in boxing where, if you lose, you're literally damn-near forgot about. You're shamed. And the fans don't want to see you fight back. They're like: ''Haha, you lost, your career is over because you're not Floyd.'' So I think the MMA guys are more willing to take risks.' 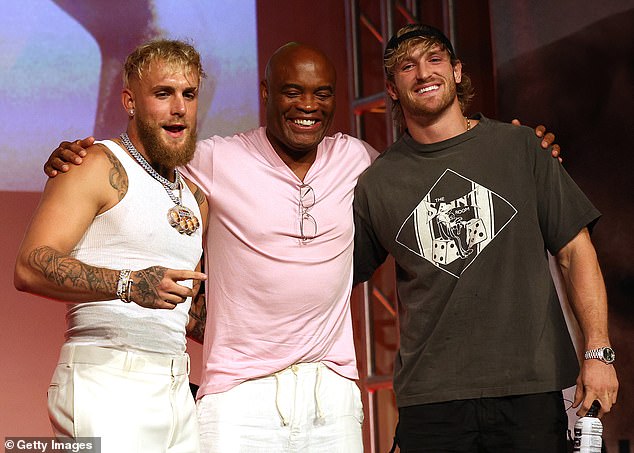 Obviously Paul didn't get into the fight game as a form of charity.

But when asked, Paul told DailyMail.com that his goal is to be a positive influence, expanding the reach of combat sports while preventing fighters from being exploited.

'I guess the word that comes to mind is just, like, ''positive,''' Paul said. 'Just bringing more fans and a new audience, new excitement, new ways of promotion, helping fighters like Amanda Serrano.'

As for his next PPV attraction, Paul still hopes to face 56-year-old Mike Tyson, who fought on an MVP card in an exhibition against another retiree, Roy Jones Jr., in 2020.

A deal was reportedly close between Paul and Tyson back in January, but ultimately an agreement was never reached.

'Not yet, not yet,' Paul said. 'I don't know if he wants to get active again. He said maybe later in the year, but I don't know where things stand. I would love to do that fight. But he has also to be down to train for it.

For now, a Paul-Tyson matchup seems unlikely, but such a curiosity does have the potential to attract fight fans for a lucrative PPV event.

Besides, Paul still has to beat Silva, and that's hardly a guarantee.

'He's a great striker, that's what he was known for: knocking people out,' Paul said of Silva, who previously beat boxer and former WBC middleweight champion Julio César Chávez Jr. 'He's shifty, he's quick, he's elusive. He has this unorthodox style and that's why he's been on this KO streak in boxing right now.

'He has a really high skill level. He's great in every area of the ring, outside, inside, his movement, head movement, foot work, all of it.'

As for a prediction, Paul sees himself winning Saturday: 'I knock him out in under five rounds.'

That might sound like foolish overconfidence, but to anyone paying attention, Paul is not someone to be underestimated.