Imran Khan 2.0: What exactly is happening in Pakistan?

Imran Khan 2.0: What exactly is happening in Pakistan?

Is Imran Khan really challenging the military? He has certainly taken on its chief. But why is he doing it? He wants haqiqi azadi, real freedom. But for whom, Pakistan or himself?

Former Pakistan PM Imran Khan was also widely seen to have been propped up by the military. But something changed down the line.

By Darpan Singh: It's been almost impossible for Pakistani politicians to become prime ministers without the military's support. It's been equally difficult for prime ministers to remain in office without developing a good relationship with, or being subservient to, the military. In any Islamabad versus Rawalpindi tussle, the latter has mostly won.

The military has had the upper hand in matters of how the country should be run, besides what the nuclear doctrine and foreign policy should be. In case of defiance, premiers have been disqualified, assassinated and hanged, and military dictators have overthrown democratically elected governments.

It was against this backdrop that Imran Khan, the cricket world cup-winning captain, became the prime minister in 2018. The plank was welfarism, anti-corruption and the country's economic revival.

But Imran, who had a pin-up boy image before getting into philanthropy and then politics, was also widely seen to have been propped up by the military. But something had shifted in the process. A hybrid model replaced the old order. The prime minister appeared to be more in charge, and the generals continued to pull the strings, only less directly.

But the story didn't have a happy ending. In April 2022, the charismatic 70-year-old was ousted in a vote of no-confidence brought by the country's political opposition. In a way, it wasn't surprising because no prime minister in Pakistan has been able to complete the full five-year term in office.

But there was also a shift in Imran's ouster that had followed show-of-strength rallies by both camps. No bloodshed. No incarceration. No dictatorial dismissal. He became the first Pakistani prime minister to exit, with a facade of parliamentary procedures hanging overhead. But the military's tacit hand in widespread defections and beyond was too glaring to miss. 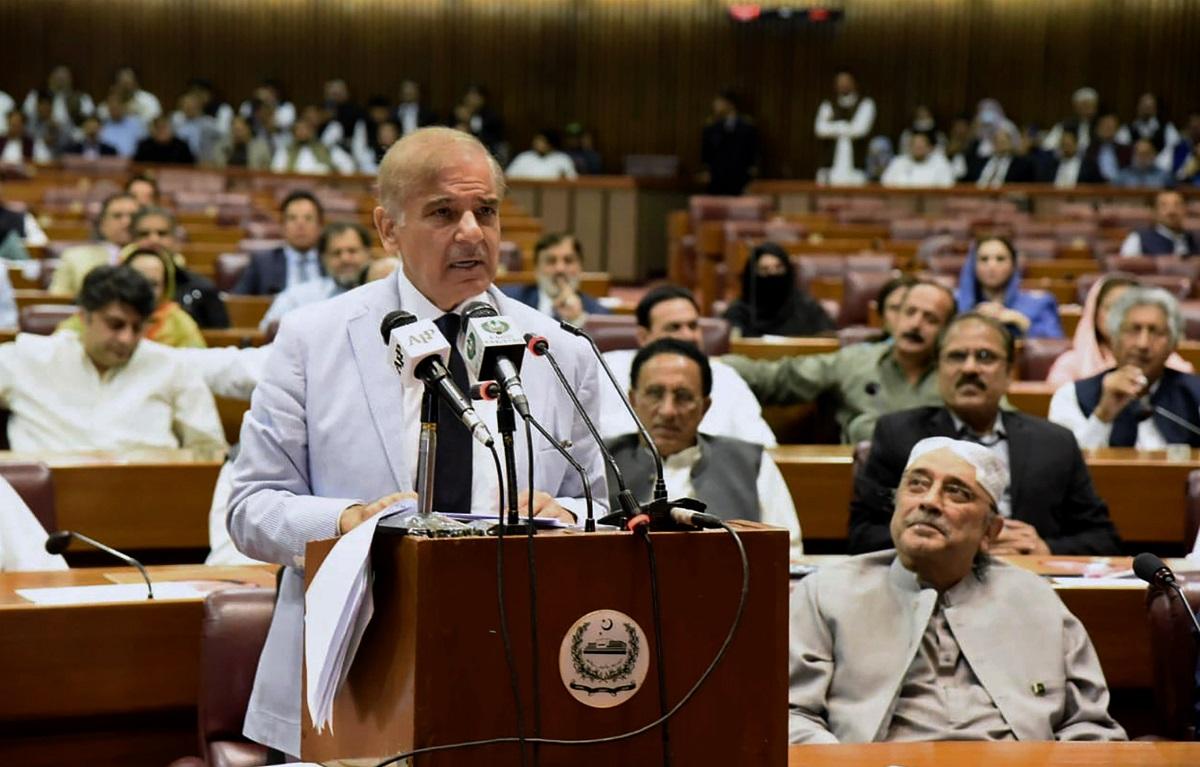 But why did Imran Khan have to go? He had failed on the governance front, particularly in fixing the crumbling economy, went soft on the Taliban, whose fighters killed Pakistani soldiers, became anti-America, and moved closer to China, and openly sided with Russia as Vladimir Putin invaded Ukraine.

Imran challenged the military's stand on crucial issues, including the selection of a new intelligence chief. In all this, the military didn't see the Naya Pakistan that Imran Khan had promised to deliver.

Thrown out of power, Imran didn't keep quiet. Now more popular among his supporters, with a martyr's tag, he wasn't expected to slip into oblivion anyway. He held rallies and told tens of thousands of people how he was a victim of a conspiracy by his arch-rival successor, Shehbaz Sharif, and the US. The denials weren't cutting.

Imran had left Pakistan in a financial mess. But public memory is short. Anti-American conservatives had sympathy for him, while desperate sections of youth, in particular, found a villain in the ruling elite which Imran said was busy amassing wealth while leaving millions in misery. However, Imran's calls for snap polls remained, well, just calls for a long time. Then something happened last month that triggered him to up the ante. Pakistan's election commission disqualified him from holding public office for five years for state gift sales and asset concealment. It was an opportunity he couldn't have missed.

His decision to challenge the order legally alone wasn't going to fulfil his ambitions. Immediately, he launched a long march from Lahore to capital Islamabad through protests planned across cities to escalate his call for snap polls.

One week into his haqiqi azadi (real freedom) march, marked by rallies, Imran was shot thrice into his shin by a gunman in Wazirabad. He took it as a godsend in a country notorious for political violence and its electoral harvests. 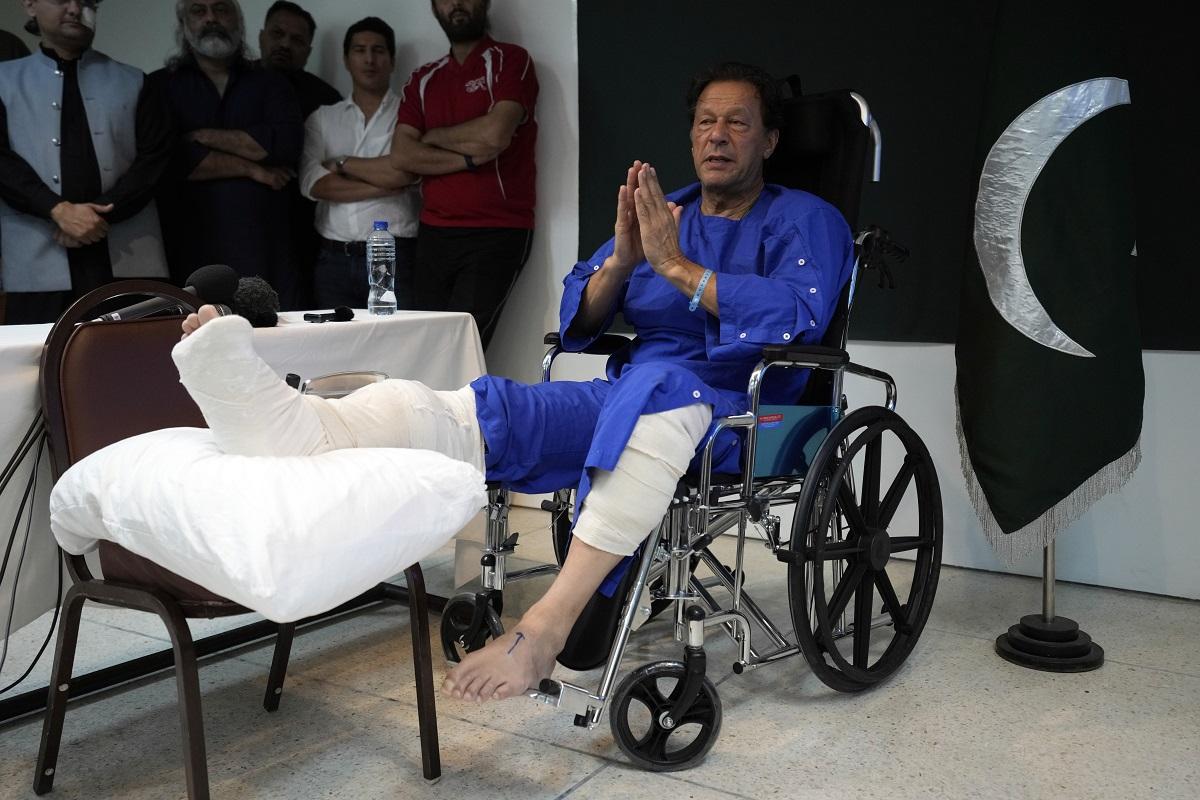 With his leg in a cast, he was seen throwing possibly the biggest challenge to the status quo seen in decades. He said PM Sharif, his home minister Rana Sanaullah and Major General Faisal Naseer were behind the attack.

Protests have broken out across Pakistani cities, including Islamabad, targeting both the Sharif government and the military. It's no longer business as usual, many would argue. It's a rare showdown. Not many civilian leaders have questioned the military, let alone taking it on. Again, the denials aren't cutting.

Though, for obvious reasons, Imran Khan has said he is not against the armed forces and his criticism of the military is merit based, it's not very unclear what he's trying to do here. 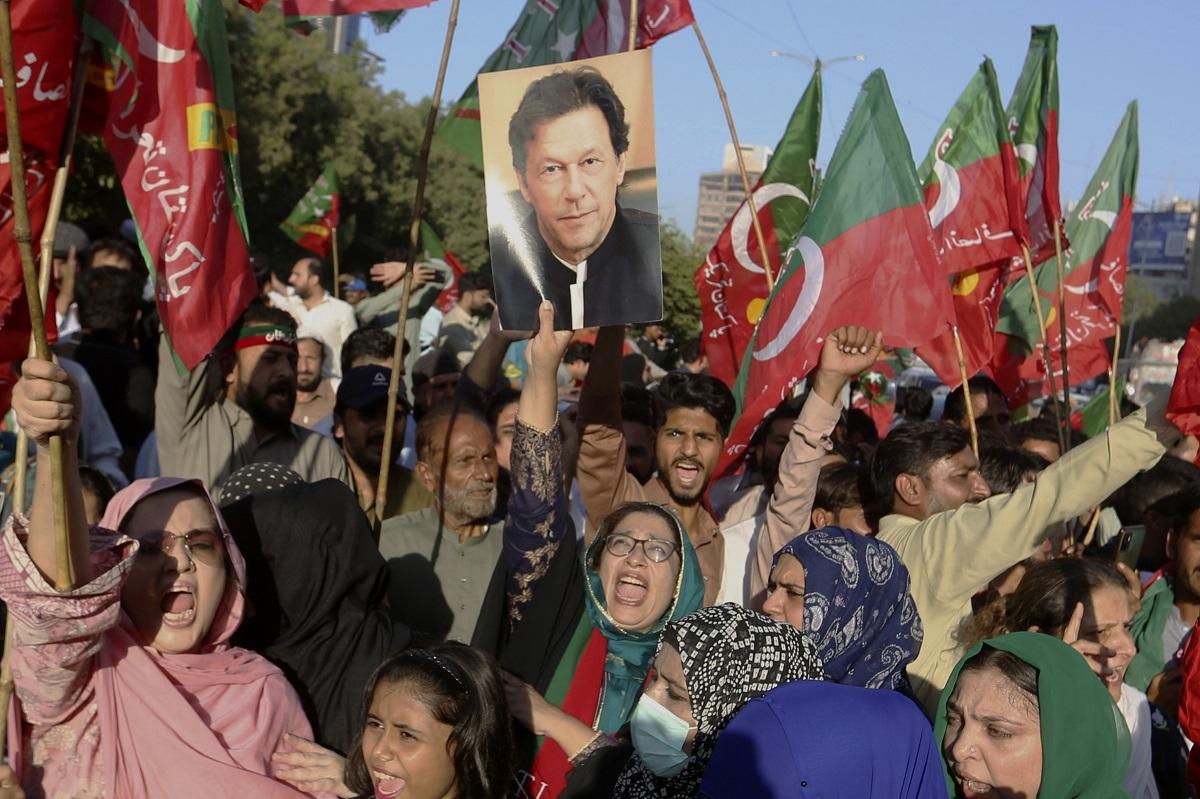 But first, let's try to look where it all began. The trouble started when Imran started promoting Lieutenant General Faiz Hameed, fifth in the rank of currently serving generals.

"It was a significant move. Imran's PTI was a single-largest party, but short of majority," said Gilani who has reported on Pakistan extensively.

In 2019, General Hameed was promoted as ISI's DG and when Gen Bajwa transferred him to Peshawar Corps, Imran did not approve of the transfer for days. Also, Gen Bajwa had been asking Imran to replace Punjab Chief Minister Sardar Usman Buzdar over incompetence, without any success.

This is when Sharif and others started warming up to the military, forgetting they had an axe to grind.

"The economy was in bad shape. Imran had turned anti-US. In his ambition to go after corruption, Imran put many Chinese projects under the scanner. His visit to Russia at the time of the invasion upset the West, a key ally. The message went to smaller parties to withdraw support," Gilani said.

What's happening in Pakistan is similar to what Turkey saw in 2016. Turkey faced frequent military coups. "But in 2016, when a powerful faction within the Turkish Armed Forces attempted a coup, people came out on the streets and defeated the design. It is an ideal time for Pakistan to draw the red line. This is not to say politicians and courts don't cross it," Gilani said. Imran has sympathisers in the military who have seen the top leaderships of the currently ruling parties as a security risk.

"For example, PPP's Benazir Bhutto [whose son Bilawal Bhutto is foreign minister] as prime minister had brought the US Ambassador to the operations room for a briefing on the nuclear programme," Gilani said.

Family business interests of PML-N's Nawaz Sharif [whose brother is now Pakistan prime minister] in India have also attracted suspicion, though he was also a military protege.

"Pakistan will need to find an answer to this," Gilani said. 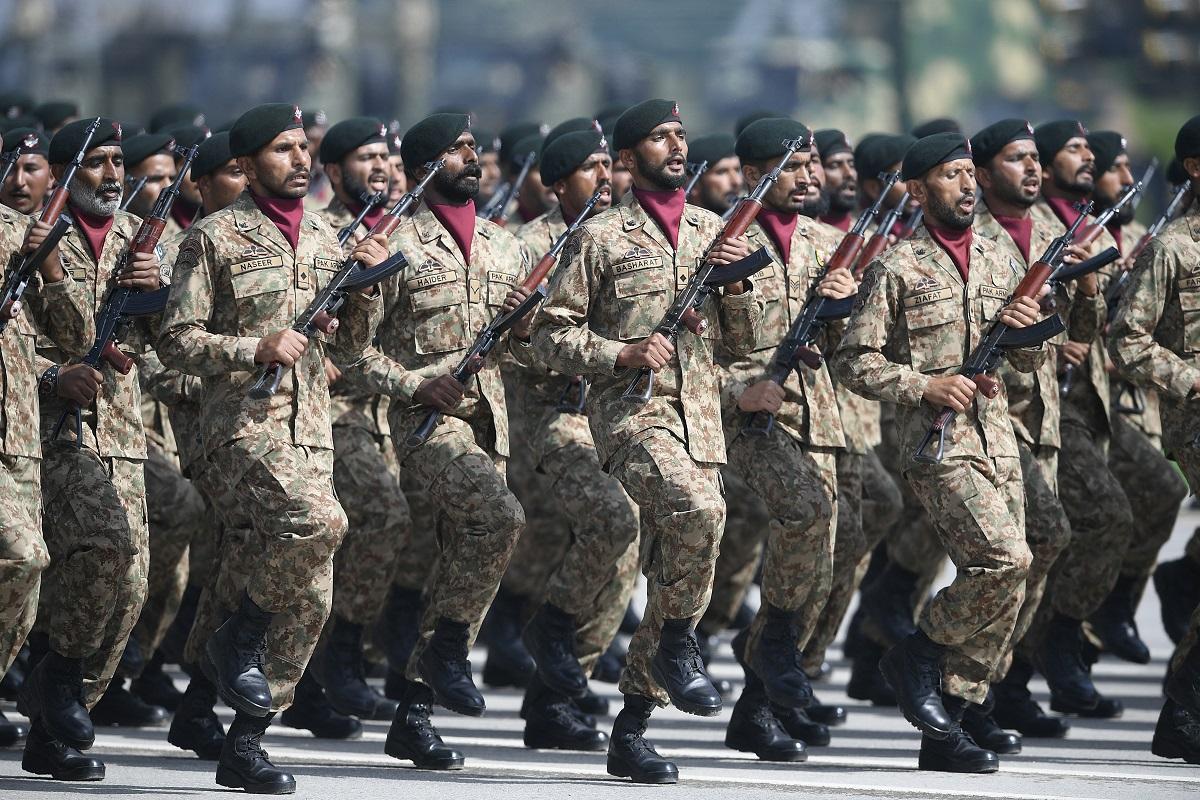 Pakistan has a large military, almost 2.7 per cent of its population (AFP photo)

Imran wants haqiqi azadi. The question is: For whom? Pakistan or himself? There is a theory that Imran is trying to pressure the military into backing him again.

In that sense, he isn't so much against the military for what it does. He actually wants the generals to do it for him. Pakistan is to find a replacement for Gen Bajwa soon. Imran Khan doesn't want Sharif to be at the helm when the decision is made.

If Imran wins this round with the military, he may return as prime minister in next year's election with greater clout. And that will be another first in Pakistan's history. Though the hybrid system will continue even then. Because the military isn't going to give up control.

It may also be the end of Imran's political career. It's a risk. But then he's a known risk-taker.