I'm A Celebrity Get Me Out of Here: Matt Hancock's cringiest moments

I'm A Celebrity Get Me Out of Here: Matt Hancock's cringiest moments 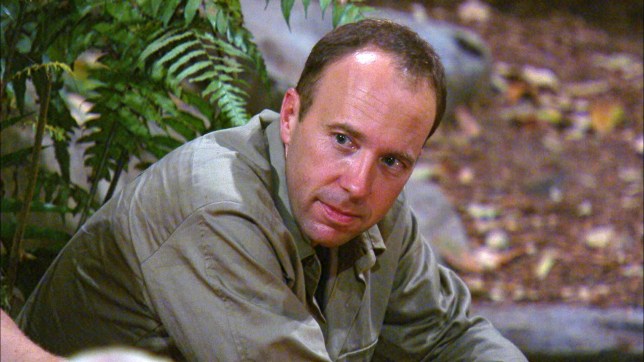 Matt Hancock is finally out of the I’m A Celebrity… Get Me Out of Here! jungle.

After a controversial start, having joined late with Seann Walsh, Hancock was voted in to do six bushtucker trials in a row to win stars for the likes of Boy George, Charlene White, Jill Scott and Mike Tindall.

He also faced grilling from his campmates about his affair in a scandal which rocked the nation, after he was caught kissing his former aide during lockdown rules which he helped to create.

During his time in the jungle, the former health secretary has admitted he’s ‘looking for forgiveness’ and spoken about his lockdown ‘mistake’.

He’s also provided more than his fair share of cringey moments, and viewers haven’t held back from highlighting them on social media.

Let’s take a look back.

In the first of many, many cringey musical moments, Hancock broke into singing an Ed Sheeran song.

Asked by Seann who his favourite band is, the politician said: ‘Quite mainstream… I’m not going to put a tattoo of Ed Sheeran on my neck.’

We’re sure Ed’s relieved to know that.

Hancock added: ‘Love him, and I’m from Suffolk as well.’

He then actually broke into song. Yep, that happened.

After singing a few lines of Perfect, he said: ‘What’s it called? Perfect? I love it.’

No one asked for this (Picture: ITV/Shutterstock)

Hours into his stint in the jungle, we were shown a scene we were definitely not prepared for that will now be stuck in our minds for a long time to come.

After he and Seann were left covered in much from their first bushtucker trial, the pair took turns having a shower, but it wasn’t the sort Myleene Klass made headlines for.

In fact, it was probably on the total opposite end of the scale.

And it was certainly a sight viewers did not want to see, as one wrote: ‘NOT A MATT HANCOCK SHOWER SCENE.’

Another penned: ‘I do not want to see Matt Hancock half naked. Please make it stop!’

Hancock was branded ‘out of touch with reality’ for not knowing the words to Sweet Caroline, when Jill was given the opportunity to reminisce on her roaring Euros success with three plays of the popular song.

Earlier this year, England celebrated winning their first major trophy since 1966 after beating Germany in the Euro 2022 final at Wembley.

Celebrations peaked when the Lioness’ belted out Sweet Caroline on the pitch following their epic win.

Almost recreating that scene, the campmates all belted out the tune – but not Hancock, who very clearly didn’t know the words.

‘Matt Hancock doesn’t know the words to Sweet Caroline and it’s the most over played song in this country,’ one person wrote.

Another penned: ‘Matt Hancock is so out of touch with reality he doesn’t even know the words to Sweet Caroline.’

Before Boy George’s shock exit, the campmates were enjoying a night at the Jungle Arms pub, and belting out their favourite tunes.

At one point, the former health secretary opted for a Queen classic, but viewers weren’t keen, not unlike his fellow campmates.

Babatunde Aleshe began: ‘What was Matt doing?’ with a disapproving ‘Mmm.’

‘I think Matt was trying to tell us something, when he sang, “I want to break free,” be free Matt,’ comedian Seann added.

Not only did Hancock sing, but he even played the air guitar.

Later in the Bushtucker Telegraph, he said: ‘I’m a massive Queen fan but I could’ve sung anyone equally badly. But that was brilliant, you can see how he gets a crowd going.’

He actually touched the bird poo with his bare hands like it was moisturizer (Picture: ITV/Shutterstock)

We’re used to seeing a lot of critters, gross substances and animal innards thrown at the celebs during their bushtucker trials.

But it was while he was back in the camp, not doing a trial, that Hancock brushed off his seat, covering his hands in bird poo, and didn’t even wash them afterwards.

The politician once advised the nation to wash their hands throughout the duration of singing ‘happy birthday’ twice to ensure they were properly clean.

But while in the jungle, Hancock had a pretty lax attitude to hygiene after he happily wiped away the droppings on his chair with his bare hands.

In reference to Hancock’s previous guidance, Owen Warner said of the bird poo incident in the Bush Telegraph: ‘That is our former Health Secretary… “happy birthday twice” he told me and he’s just given a little [flick] after touching poo with his bare hands!’

Matt Hancock tried to ‘sneak off’ with extra food

His campmates were not impressed… (Picture: ITV/Shutterstock)

While it’s hardly a secret the campmates are pretty hungry during their time in the jungle, viewers were stunned when Hancock had the audacity to try and ‘sneak extra food’ onto his plate, not long after he’d even asked for more food upon returning from a barbeque.

One evening, when they were handing out portions, Scarlette Douglas appeared to be missing part of hers, as she asked head chef Hancock: ‘Have you already given me a bone?’

When it was pointed out that the former health secretary had two bones on his plate, Scarlette was given her fair share – while an astonished Owen expressed his bafflement over the situation in the Bush Telegraph by exclaiming: ‘Trying to sneak off with two bones, and not give Jill and Scarlette one. What is going on?!’

This came shortly after the politician annoyed Hollyoaks star Owen by asking for leftovers at dinner, despite being granted the honour of eating a massive barbecue feast earlier on.

‘Matt Hancock is being greedy again,’ one person tweeted, while another wrote: ‘The cheek of Matt, nicking two bones while Owen is starving.’

I’m A Celebrity… Get Me Out of Here! continues tonight at 9pm on ITV.

MORE : Matt Hancock opens up about struggles with dyslexia during I’m A Celebrity challenge