Mike Tindall has revealed his wife Zara wasn’t actually meant to write him a letter during his time on I’m A Celebrity…Get Me Out Of Here.

The former rugby pro reunited with his wife, who’s the daughter of Princess Anne, on the iconic bridge after he left the jungle in fourth place, behind Matt Hancock, Owen Warner, and winner Jill Scott.

During his time in the jungle, he received a sweet note from his wife, which mentioned their three little ones.

Mike, who kept pretty tight-lipped on his family life, revealed that he asked his brothers to write him a letter to avoid getting too emotional – but ‘sneaky’ Zara wrote him one anyway.

‘Originally she wasn’t going to write me the note because I carry them quite close to the surface anyway and I try and put, in that situation, emotions down below,’ Mike explained on Good Morning Britain.

‘I was trying to get my brother to write the letter so he would actually probably take the mickey out of me a bit more and it’d be a grounding one rather than bringing it all back to the surface.

‘But she was sneaky on me, a sneaky little one she was there, so it got me a little bit.’ 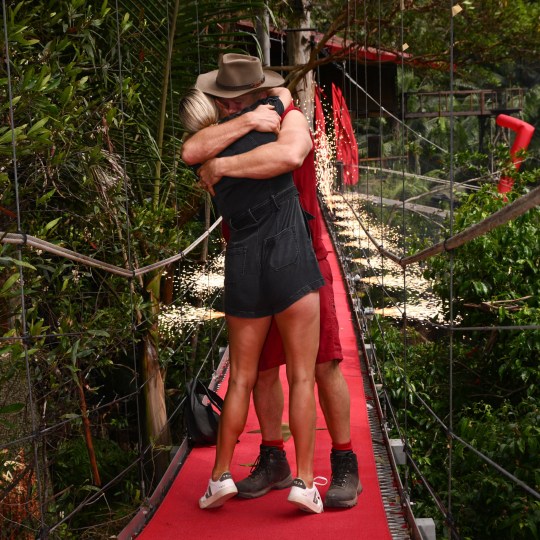 Mike was thrilled to reunite with Zara (Picture: James Gourley/ITV/Shutterstock)

He came fourth in the series (Picture: James Gourley/ITV/Shutterstock)

Mike went on to say that being away from his family was ‘the hardest thing about the whole show, especially when you’ve got three little ones as well.’

As for how many of the royal family have been watching, Mike said: ‘I don’t [know] right now but i’m sure I’ll find out at some point – Christmas is right round the corner!’

‘Let’s see if I get some interesting gifts,’ he joked, pointing out that it’ll show him how many of the family were watching along.

While he said he doesn’t believe Princess Anne was watching, he’s ready to ‘bashfully hide’ from his mother-in-law after he told the story about ripping his trousers in front of her.

‘I don’t think she was watching but I think Zara told her,’ he admitted.

However, some family members were clearly watching, as Princess Beatrice returned to Twitter after a year to celebrate Mike, telling followers he’s ‘just the greatest’.

Speaking to Ant and Dec after his exit, Mike admitted he was ‘happy to go’ but he had a ‘lot of fun’ on his ‘amazing journey.’

‘I’ve been very lucky with everyone that’s been in there and how camp’s worked together. Being in a team for a long period of my life, I didn’t expect it to work as well as it did,’ he said.

He added that it was ‘really hard’ to pick out any specific highlights after having ‘a lot of laughs’ with his fellow campmates.

‘That’s the best thing, you can get through anything when the humour’s good,’ he said. ‘And in all fairness to everyone, everyone had distinct humour.’

The campmates have now all reunited after the final, celebrating former Lioness Jill after she was crowned Queen of the Jungle.

Good Morning Britain airs weekdays at 6am on ITV. I’m A Celebrity is available for catch-up on ITVX.

MORE : I’m A Celebrity’s Mike Tindall couldn’t look more smitten with wife Zara and fans are obsessed: ‘Why did i just sob?’

MORE : Mike Tindall thrilled as he reunites with former I’m A Celebrity campmates while wife Zara bonds with stars