Here's What Ambulance Workers Are Saying As They Go On Strike

Here's What Ambulance Workers Are Saying As They Go On Strike

Ambulance workers walked out on Wednesday, amid a bitter war of words with the government over pay.

But Rishi Sunak’s government has refused to negotiate over pay. And Steve Barclay, the health secretary this morning accused staff of having “taken a conscious choice to inflict harm on patients.”

Unison general secretary Christina McAnea said she was “utterly shocked” by the suggestion.

Here is what some workers on the picket line have said today, in interviews with PA Media.

“It’s getting worse and worse by the day”

Student paramedic Sam Catcliffe said one reason for the strike was the impact on both staff and patients of long queues for ambulances to drop off at hospitals.

The NHS worker, speaking at a picket line outside a West Midlands Ambulance Service site in Coventry, said: “It’s getting worse and worse by the day.”

Catcliffe said he felt strongly about the issues faced by patients, adding: “It’s never nice going to someone who has been waiting five, six, seven or ten hours for an ambulance.

“We would like to get there as soon as we can ideally.

“We needed to take action to get our voice and point across. Hopefully something gets resolved from it.” 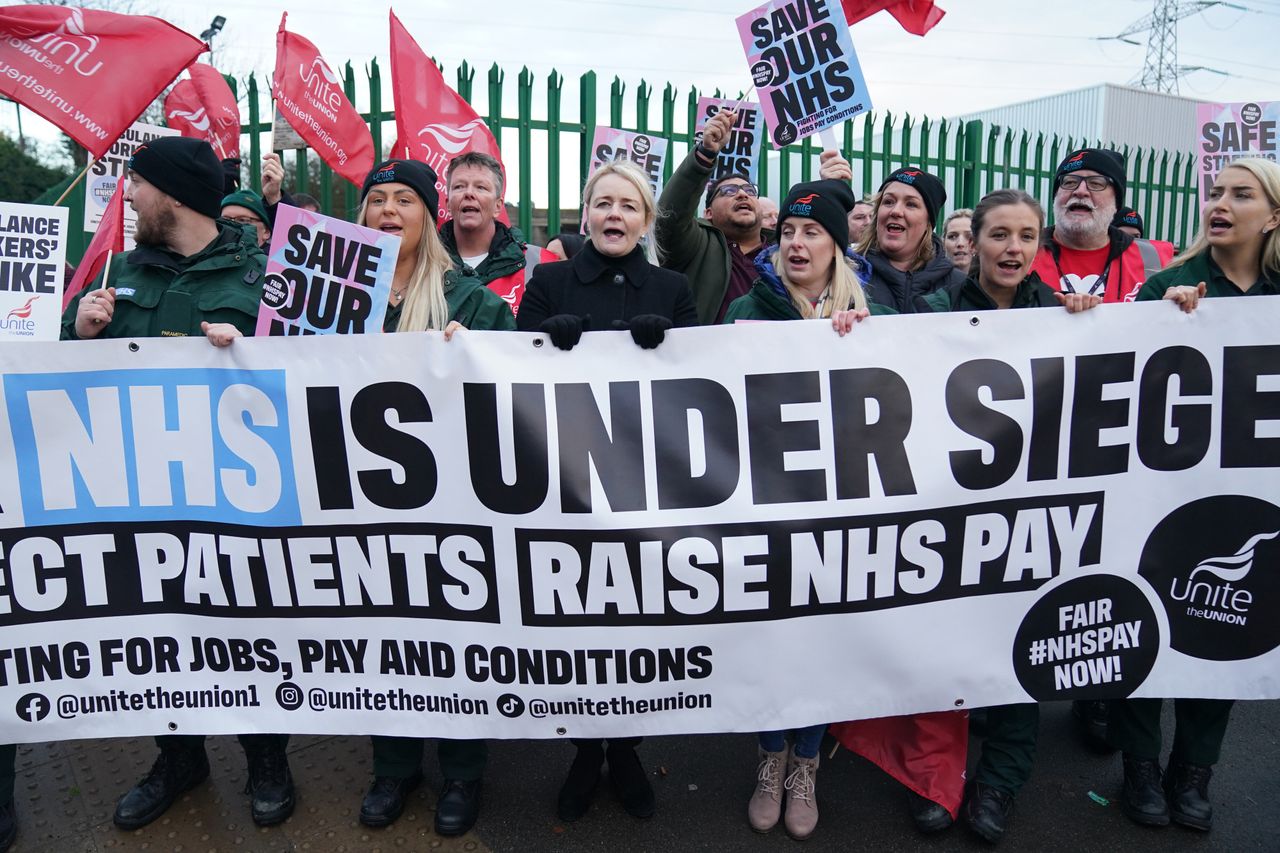 “No-one is taking us seriously”

Among those on the picket line outside West Midlands Ambulance Service’s hub in Coventry was paramedic Ryan Carruthers.

He told reporters pay levels meant many paramedics were struggling with heating and food bills, but that his main reasons for striking were that patients deserve better treatment, coupled with a lack of funding and staff.

The 23-year-old said those on strike were ready to leave the picket line and respond to the most serious calls if necessary.

The number of patients and their relatives who were angry and upset at long delays was a key issue for ambulance service staff, some of whom had seen their mental health impacted, Carruthers said.

“Obviously it’s not what we wanted but this is what we have to do,” he said. “We deserve better pay and better working conditions. I feel it’s the only way for it to get the attention it deserves. No-one is taking us seriously.

“It’s been going on for a very long time and still nothing has changed.”

“The pressure is constantly on”

One senior health adviser for the local 111 service in Kent, who did not want to be named, said: “We’re under increased pressure but there were twice as many calls waiting on Sunday, a non strike day, as there have been today.

“From a staff point of view, the pressure is constantly on – it never used to be like this, it’s because of a lack of staff.”

“The people that are suffering are the patients”

An ambulance worker on the picket line who also did not want to be named said: “We’re making sure staff in the NHS get a fair day’s pay for a fair day’s work.

“It’s so busy, it’s excruciating and it’s not fair on the patients.

“We’re busy now because of Strep A, 111 is inundated and the people that are suffering are the patients.”

Harry Maskers, a former Royal Marine who now works as an EMT for the Welsh Ambulance Service, said: “Doing a job not for the money is all well and good but it doesn’t pay your mortgage, and it doesn’t put food on your kid’s table.

“I earn less now than I did when I was 20 and working in a call centre, and believe me I experience a lot more trauma in this job.

“I’m a single dad but I’m fortunate, I have a strong support network and family around me. But I know people a lot worse off who are having to use food banks.

“One day you’re saving someone’s life or holding someone’s hands because their son has committed suicide upstairs. The next day you’re going into a food bank because you can’t feed yourself. It’s beyond a joke now and something needs to change.”

Help and support:Mind, open Monday to Friday, 9am-6pm on 0300 123 3393.Samaritans offers a listening service which is open 24 hours a day, on 116 123 (UK and ROI - this number is FREE to call and will not appear on your phone bill).CALM (the Campaign Against Living Miserably) offer a helpline open 5pm-midnight, 365 days a year, on 0800 58 58 58, and a webchat service.The Mix is a free support service for people under 25. Call 0808 808 4994 or email help@themix.org.ukRethink Mental Illness offers practical help through its advice line which can be reached on 0808 801 0525 (Monday to Friday 10am-4pm). More info can be found on rethink.org.
Tag: ambulance workers strike, ambulance workers strike scotland, can paramedics go on strike, what is an ambulance worker called, ambulance workers pay. Campaign Against Living Miserably, West Midlands Ambulance Service.

Related News
Here's What Ambulance Workers Are Saying As They Go On Strike
Britain is being hit by a wave of strikes. Why have things got so bad?
Strikes: Who are the ‘good’ strikers and who are the ‘bad’ ones? How you answer says a lot about you
When is the teachers strike, why are they striking, and will schools close?
DANIEL JOHNSON: Malicious rail unions are colluding to wreck ANOTHER Christmas
Ministers 'dangerous and irresponsible' for not talking to striking nurses - as union warns people will die
It's the government's fault if people die during ambulance strikes, says union boss
NHS strike chaos could last SIX MONTHS and begin before Christmas
Paramedic strike map - search picket lines and how walkout today hits you
Ministers hold talks with union bosses in bid to avert strikes
Don't get drunk: U.K. govt urges caution amid ambulance strike
Wednesday briefing: Ambulance workers are on strike – and it’s been a long time coming
Latest News
Adani Enterprises stock rallies 9% after 2 troublesome sessions
Chiefs top Bengals 23-20 on last-second kick for AFC title
Access Control Systems Market Looks Ready For Takeoff
Adani Enterprises shares rally 9% but Adani Total Gas, Adani Transmission, Adani Green tumble up to 20%
ECB to hike rates again, but outlook brightens
NFL Championship Sunday: 6 biggest winners and losers, including Patrick Mahomes
Chiefs beat Bengals in AFC title game rematch, punch ticket to Super Bowl
PSG held to 1-1 draw after Reims equalizes in stoppage time
‘Hike in fuel price to jolt businesses, households’
This Is Not The End But The Beginning And A 'first Step': Rahul Gandhi As Bharat Jodo Yatra Nears Completion
Messi, Neymar, Mbappe All Start But 10-Man PSG Held As Dogged Reims Strike Late
Asia shares brace for rate hikes, earnings rush
Jalen Hurts is going to the Super Bowl? Bears’ Justin Fields should feel free to follow him
‘The Last of Us’ episode 3 review: A glimpse of love and joy
Millikin graduate Annie Wersching, '24' actress, dies at 45