Glass Onion Odds: Who is the ‘Knive’s Out’ Murderer?

Glass Onion Odds: Who is the ‘Knive’s Out’ Murderer? 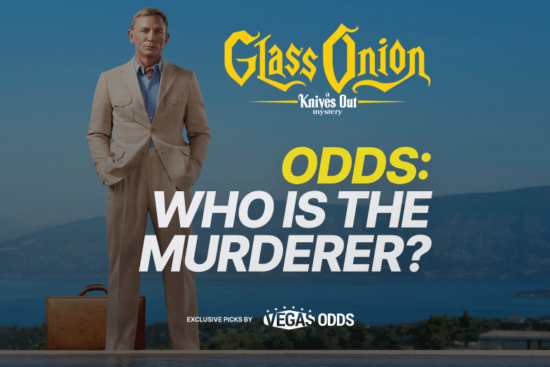 Knive’s Out wasn’t necessarily a surprise hit in 2019 as it did feature a star-studded ensemble cast, but a $300 million global box office haul is something almost no film can rely on. Knive’s Out has a 97% approval rate on Rotten Tomatoes and received an Academy Award nomination for the best original screenplay as well as a Golden Globe nomination for a best motion picture – music or comedy.

Following the success of the original Knives Out film, Netflix paid $469 million for the rights to two sequels written and directed by Johnson. The first of those sequels comes out on November 23rd, and odds are already available for Glass Onion murderer odds for this mystery thriller.

The first teaser trailer for the long-awaited Knives Out sequel shows the star-studded cast swept up in a mysterious murder. pic.twitter.com/vowPwLlqjV— IGN (@IGN) September 8, 2022

About the First Knive’s Out

Whenever you try to handicap entertainment betting, the best – or perhaps only – approach you can take is following past trends. Whether that’s the exact time of the National Anthem at the Super Bowl predicting who the killer is going to be in a sequel you need to evaluate the past.

Johnson is a talented writer and director, so he’s probably not going to just copy and paste the first Knives Out say, like the Hangover trilogy did. In the first knives out Daniel Craig was hired as an anonymous detective to investigate the death of wealthy author Harlan Thrombey (Christopher Plummer).

There were plenty of people that wanted Thrombey dead in the first movie after it was discovered that he had cut out his leeching family from his will. That star-studded family included his eldest daughter (Jamie Lee Curtis), her husband (Don Johnson), their son (Chris Evans), Thrombey’s youngest son (Michael Shannon), and another deceased son’s widow (Toni Collette).

Spoiler Alert: Ultimately Thrombey left the entirety of his estate to his maid (Ana de Armas), and Evans’ character ultimately had the plot to switch his grandfather’s medicine and frame the maid for murder. Once Thrombey realized he had accidentally received a lethal dose of morphine he protected his maid by slitting his own throat so in a spin, the killer was ultimately himself.

Synopsis: When renowned crime novelist Harlan Thrombey is found dead at his estate just after his 85th birthday, the inquisitive and debonair Detective Benoit Blanc is mysteriously enlisted to investigate.

Technically there was no outside killer in the first Knive’s Out as Thrombey killed himself, so will a similar formula play out in the sequel: Once again a star-studded cast has signed on that includes Craig back to reprise his role as Benoit Blanc, joined by Edward Norton, Janelle Monae, Kathryn Hahn, Kate Hudson, and Dave Bautista to name a few.

This new premise is Norton’s character being a tech billionaire who invites his friends to his private island where obviously somebody ends up dead. Here are who the books like for the Glass Onion murderer odds:

Dave Bautista – Bautista plays Duke Cody, a YouTube star and Men’s Rights Activist. The former WWE star is 6’4 and 289 pounds so him killing somebody wouldn’t be a stretch. Would Johnson use such an obvious choice though?

Kathryn Hahn – Claire Debella is the governor of Connecticut and a senate candidate, and it’s definitely not out of the realm of possibility for a politician to have somebody silenced to protect themselves.

Edward Norton – The main character in the first Knive’s Out killed themselves, so maybe Johnson sticks with what was successful in the sequel?

Janelle Monae – Monae plays Norton’s ex-business partner and if you watch much Dateline the killer is usually a spouse or a scorned business partner.

Daniel Craig – One would assume Craig sticks around for the third installment of Knive’s Out so having him as the murderer wouldn’t make a ton of sense – but that’s why it would be such a shocker.