Downing Street cat: What is his name and who does he belong to?

Downing Street cat: What is his name and who does he belong to? 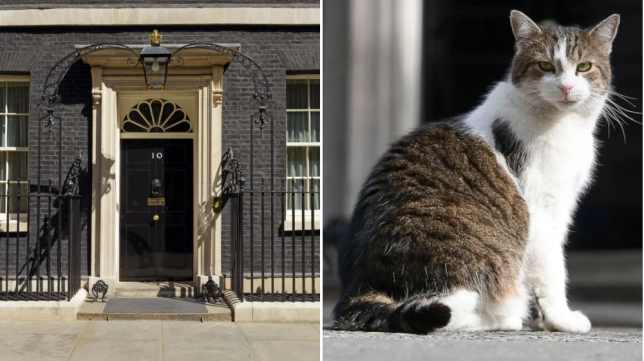 With Downing Street in turmoil following Liz Truss’ resignation as Prime Minister, even its chief mouser is attempting to put himself forward for the job on social media.

Speaking in a Twitter post, the political world’s favourite kitty said: ‘The King has asked me to become Prime Minister because this nonsense has gone on long enough.’

Whoever becomes Prime Minister in the wake of Ms Truss’ exit will become the fifth during the resident feline’s life.

But what is the Downing Street cat’s name, and who does he actually belong to?

What is the name of the Downing Street cat?

The title of Chief Mouser is currently held by a cat named Larry.

The brown and white tabby has held the title since 2011, after being adopted from the Battersea Dogs & Cats Home by Number 10 staff.

He has been Cheif Mouser for three Prime Ministers: David Cameron, Theresa May, and Boris Johnson.

Larry’s job performance has come under some scrutiny in the past. Within a month of his arrival at Downing Street, anonymous sources told The Daily Telegraph that Larry displayed ‘a distinct lack of killer instinct.’

That being said, he was seen nearly taking out a pigeon in 2020.

â€œThe King has asked me to become Prime Minister because this nonsense has gone on long enough.â€ pic.twitter.com/eFL3fgSfVL— Larry the Cat (@Number10cat) October 20, 2022

Larry’s relationship with other animals at Downing street has also been a point of concern in the past.

He has reportedly gotten in a couple of scuffles with the Foreign Office’s cat Palmerston, with Larry even having to pay a visit to the Vet after a particularly violent scrap back in 2016.

His relationships with visiting politicians have also been a bit of a mixed bag, with Larry causing a stir during one of President Donald Trump’s visits to Downing Street.

Larry decided to have a lie down under Trump’s £1.2million armoured Cadillac, meaning that the former US President couldn’t leave after a meeting with Theresa May.

Larry caused some diplomatic tensions when he got under Trump’s car during one visit (Picture: Daniel Leal/AFP via Getty Images)

David Cameron did say, however, that Larry seemed quite taken with Trump’s predecessor.

‘Funnily enough, he liked Barack Obama’ the former PM told the BBC back in 2011. ‘Obama gave him a stroke and he was all right with Obama.’

Who owns Larry the cat?

Technically, the Downing Street staff own Larry and no one individual is responsible for No10’s head mouse catcher.

Time to clarify a few things:
1. Iâ€™m not â€œBoris Johnsonâ€™s catâ€
2. Like all Prime Ministers, heâ€™s only a temporary resident of Downing Street
3. I live here permanently. When he finally goes, I stay
4. Yes, itâ€™s all very embarrassing but it will be over soon

David Cameron explained during his final Prime Minister’s Questions in 2016 that Larry is a civil servant and not personal property, therefore he does not leave Downing Street after a change of premiership.

You can keep up with Larry’s antics on his Twitter account, which boasts 650k followers and counting.

MORE : The real @liztruss is replying to everyone on Twitter and she’s hilarious

MORE : Prime Minister result: How many votes did Liz Truss win by?

Not convinced? Find out more »

Related News
Downing Street cat: What is his name and who does he belong to?
Social media explodes with memes calling for a return of Boris Johnson
Blues cruise: How Potter’s serene start could prove pivotal for Chelsea
The British Conservative Party began the electoral campaign to choose the successor of Liz Truss
What is the Downing Street cat's name and who does he belong to?
New prime minister will be in place before the fiscal statement on October 31 - Sir Graham Brady
‘Extraordinary mayhem’: Truss’s nightmare on Downing Street
45 Days, 2 Monarchs: How Liz Truss' Stint as Prime Minister Bridged Queen Elizabeth and King Charles
Could Boris Johnson return as British prime minister after exit of Liz Truss?
Rishi Sunak becomes British prime minister after meeting with King Charles III
Chicago dumping Kanye too? Wieners Circle marquee quip, West Loop mural repainting signal rejection
Sesame Street Original Cast Bob McGrath Dies at 90
Latest News
Worst of inflation behind us: Das
Restorative Dentistry Market to Hit USD 25.76 Bn and Emergent at Growth Rate of 6.3 % by 2029 Competitive Landscape, New Market Opportunities, Growth Hubs, Return on Investments
Putin Says Fight In Ukraine Could Be Long; Zelenskiy Vows Not To Leave Any Ukrainian Under Russian Occupation
In those days at this time
Time to rethink Light Rail
‘He’s unbelievable’ – Kyle Walker ‘doesn’t need tips’ ahead of Kylian Mbappe battle in World Cup quarter-final between England and France, says Matty Cash
Peru's president was removed from office after he attempted to dissolve the congress and subvert democracy
U.S., U.K. Military Chiefs Discuss Ukraine, China
Cody Gakpo admits he will consider Manchester United move
No appeal against ruling in NZ baby blood case, surgery to go ahead
James Cameron Not Worried About ‘Avatar 2’ Flopping
UK approves first new coal mine in decades, sparking anger
Critics of Cristiano Ronaldo urged to empathise with Portugal man amid struggles on and off the pitch
Germany foils far-right plot to install Prince Heinrich XIII in coup
Real Madrid pip Paris Saint-Germain and Chelsea to signing of £62-million Brazilian wonderkid Endrick from Palmeiras