Justin Langer has put to rest any lingering rumours of a rift between himself and members of the Australian cricket team in a public display of peace at Optus Stadium in Perth. The former national team coach was out on the field on Wednesday morning ahead of the first Test against the West Indies before his commentary duties for Channel 7.

Langer thrust himself back into the public spotlight this week when he took aim at 'cowards' within the Australian team in an explosive podcast appearance. The former coach left his position earlier this year after only being offered a six-month extension amid reports he'd fallen foul of the players with his intense style.

'OUT OF THIS WORLD': Cricket fans loses it over never-before-seen feat

Rumours have also been circulating that Langer isn't on speaking terms with the current playing group. But those rumours appeared to be put to bed on Wednesday as Langer shook hands and hugged a number of the Aussie players, including captain Pat Cummins and veteran stars Steve Smith and David Warner.

"I love Australian cricket," Langer later said on Channel 7. "I love being back and seeing the boys. I haven’t seen them for nine months."

In a column in the West Australian last weekend, Langer denied there had been any falling out with his former team and again rejected the notion he had been too intense as coach. His column came after a week in the headlines via comments from the podcast, when he accused sources who had leaked to the media during his tenure of being 'cowards'.

Speaking on Tuesday, Cummins made a point to reveal how Langer had clarified several of his comments, including claiming he was not referring to the players as cowards. The Aussie skipper said: "There's no cowards in the Australian cricket team, not ever.

"I thank Justin for clarifying his remarks afterwards. He had a think about it and clarified it, so I thank him for that. But we're really proud of the last 12 months, how we've fronted up, the way we've played, the way we've conducted ourselves. Players can certainly hold their heads high." 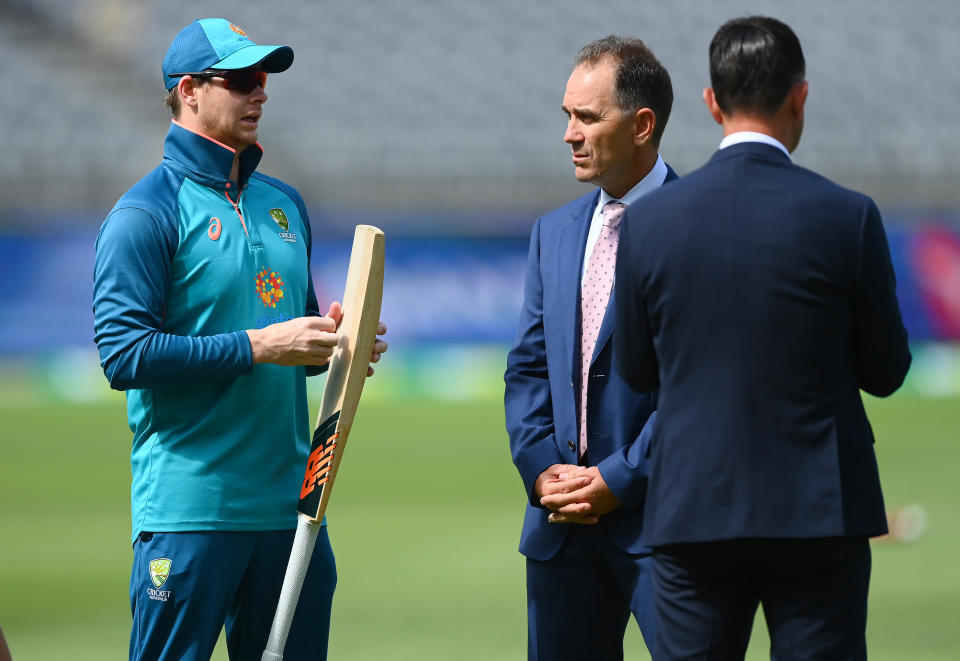 In the infamous podcast appearance, the former national coach also lamented a lack of direct feedback from players including Cummins and Aaron Finch late during his tenure. Those comments in particular drew the ire of Cricket Australia CEO Nick Hockley, who issued a statement standing by the players.

"I'd probably never disclose private conversations, but you'd have to ask Justin," Cummins said. "There's no ill will to what he was trying to do and he clarified afterwards.

"I feel like there's so many good things going on at the moment, especially this Test team (being) No.1 in the world. It's disappointing sometimes the focus gets drawn to off-field issues but it hasn't really affected our team."

So all his mates sticking up for him despite hearing exactly what he said. The old, “ it was taken out of context line” we heard what he said he was having a go at Finch and Cummins calling them cowards.

Lol there’s literally a dozen fans there in the crowd.

Australia won the toss and opted to bat first. Cummins showed no hesitation on an Optus Stadium wicket with plenty of grass left on to counteract the heat.

Australia have stuck with their regular XI, with Josh Hazlewood returning to the side after an injury-interrupted 2021-22 followed by stints on the sideline on the sub-continent. The Perth Test marks the first of nine for Australia in the space of three months at home and in India, as they push for a spot in the World Test Championship final.

"There might be a little bit in (the wicket), but we're going to back our batters in," Cummins said at the toss. "Every series is big, but this has an extra carrot for us (with the Test Championship). We missed out last time, and hopefully with a few more wins we'll secure our spot."

West Indies will debut the son of former captain Shivnarine Chanderpaul, with 26-year-old Tagenarine to open the batting. The tourists fast-bowling attack looms as their biggest weapon, with Alzarri Joseph the spearhead and assistance likely to be on offer early.

Click here to sign up to our newsletter for all the latest and breaking stories from Australia and around the world.