Carabao Cup: How Man United Could Line Up vs Nottingham Forest Ahead of Semi Final Clash

Carabao Cup: How Man United Could Line Up vs Nottingham Forest Ahead of Semi Final Clash

Updated: 5 days, 13 hours, 47 minutes, 20 seconds ago
Manchester United are set to return to action on Wednesday night in the Carabao Cup to face Nottingham ForestThe Red Devils will miss the services of at least three key players, including Anthony Martial and Jadon SanchoCasemiro is expected to be back in contention after he missed United's trip to Arsenal through suspension

Manchester United will be without at least three key players when they take on Nottingham Forest in the first leg of their Carabao Cup semi-final fixture.

The two Premier League teams are scheduled to face off on Wednesday night, January 25, with a place in the final of the tournament at stake.

The match comes just days after United were dealt a massive blow in the Premier League title bid following their 3-2 heartbreaking defeat against rivals Arsenal. 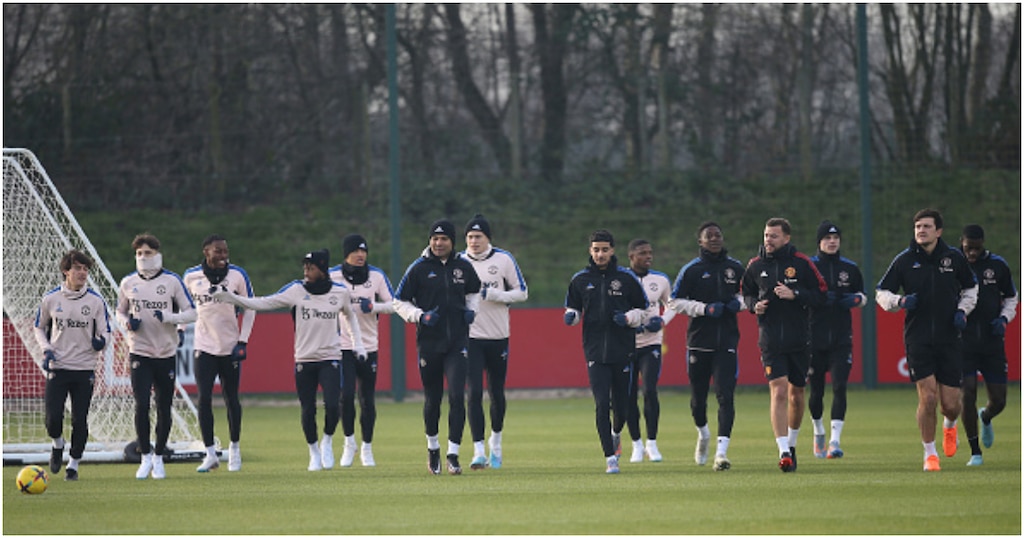 Erik ten Hag and his charges are now set to shift their focus to their upcoming clash against Nottingham at City Ground.

Exciting feature: Check out news exactly for YOU ➡️ click on "Recommended for you" and enjoy!

The Carabao Cup represents the best chance for the Dutchman to win his first trophy at Man United since his arrival in the summer.

However, they remain two steps away from securing that title, with The Garibaldi among the teams they would need to overcome to stand that chance.

United will take the trip to City Ground without three key players in the shape of Anthony Martial, Diogo Dalot, and Jadon Sancho.

Both Martial and Dalot were absent from the team that made the trip to the Emirates Stadium last weekend, while Sancho is yet to feature for the Red Devils post the World Cup.

Speaking ahead of the Nottingham meeting, Ten Hag did not offer much insight on when the trio could return to action.

United will be boosted by the availability of Casemiro, who missed the Arsenal clash due to suspension.

The clash on Wednesday could see several Man United youngsters earn some minutes under their belts, with several first-team players expected to be rested.

Tom Heaton is projected to replace David de Gea between the sticks, with Harry Maguire and Victor Lindelof potentially replacing Raphael Varane and Lisandro Martinez at the heart of defence.

Tyrell Malacia could slot in for Luke Shaw in the left-back, with Aaron Wan-Bissaka continuing on the right in the absence of Dalot.

In midfield, Casemiro could be called up alongside Christian Eriksen, with Fred and Scott McTominay settling for a place on the bench.

Bruno Fernandes is expected to continue in the No.10 role, with Marcus Rashford and Antony joining him in attack.

January arrival Wout Weghorst is in line to lead the line as he eyes to bag his first goal for Man United.

United players are among the best-paid footballers in the world, with David de Gea currently the club's top earner.

Rashford, Fernandes, and Casemiro were some of the players spotted spinning luxurious cars to Carrington.

However, Christian Eriksen, who moved to Old Trafford for free, kept it relatively low-key in a Porsche.