Multiple sclerosis (MS) is a disease in which the immune system eats away at the protective covering of nerves, and interrupts the flow of information between the brain and the body

Christina Applegate brushed off her multiple sclerosis diagnosis on Monday as she accepted a star on the Hollywood Walk of Fame, recognizing her decades of work in television and film.

In a tearful speech, the Emmy Award winning actress, 50, thanked her friends and family for helping her live every day with the debilitating condition — before openly joking about it.

'By the way, I have a disease,' she told the audience, who was barefoot and stood with the aid of a cane as she was propped up by her Married With Children co-star Katey Sagal. 'Did you not notice?'

The actress first revealed in August 2021 that she had been diagnosed with MS - a disease in which the immune system eats away at the protective covering of nerves, and interrupts the flow of information between the brain and the body.

Earlier this month she said that the illness had devastated her mobility, leaving her unable to walk without a cane and said she had put on 40lbs. 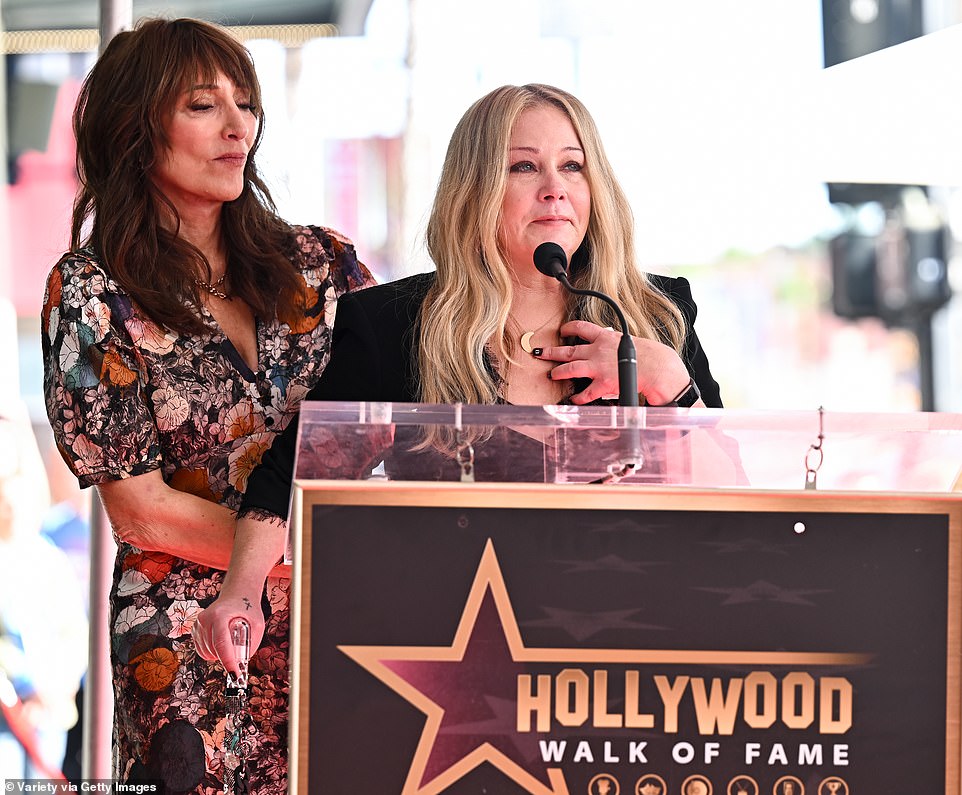 Christina Applegate, 50, spoke about her struggles with multiple sclerosis as she accepted a star along the Hollywood Walk of Fame at a ceremony on Monday 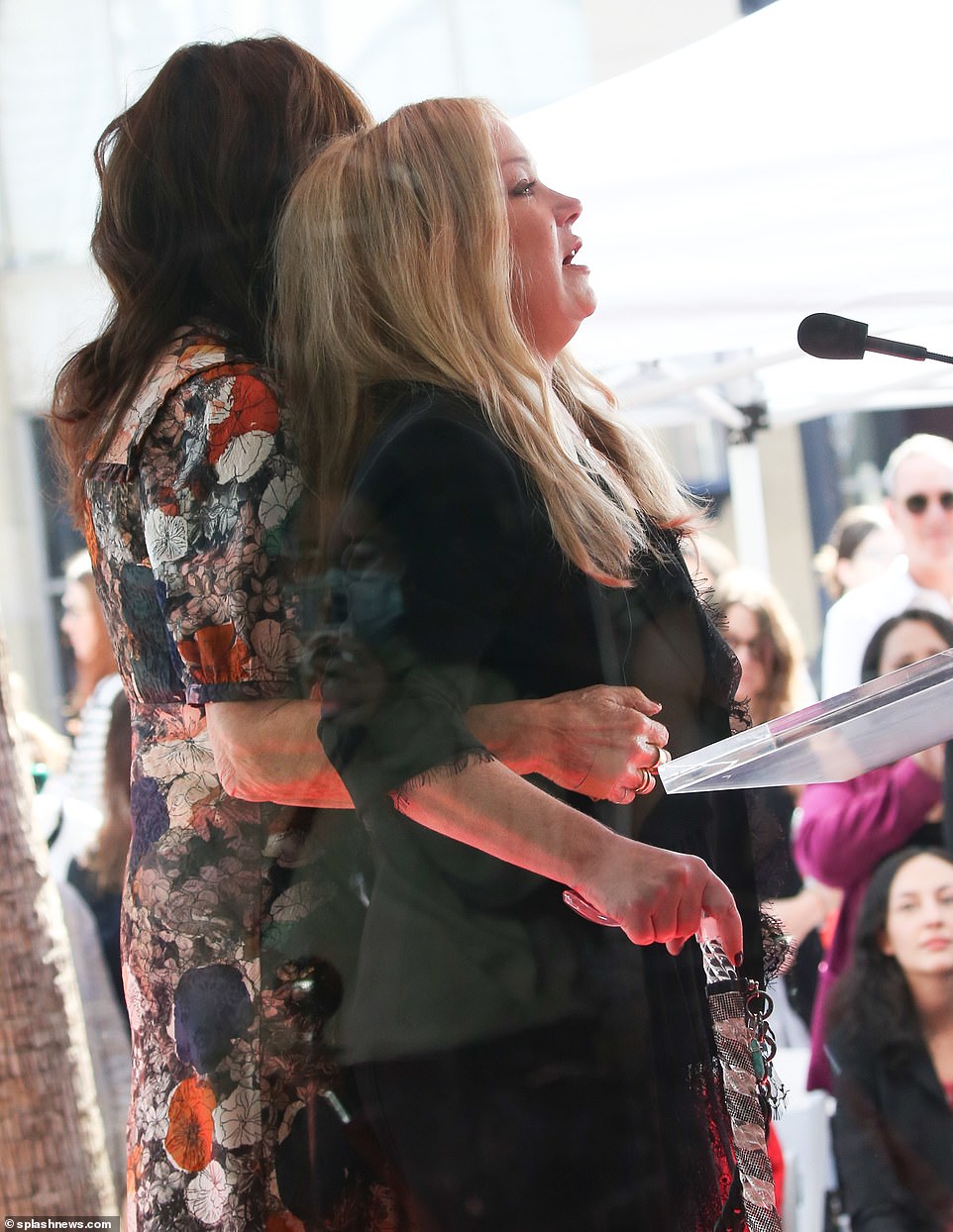 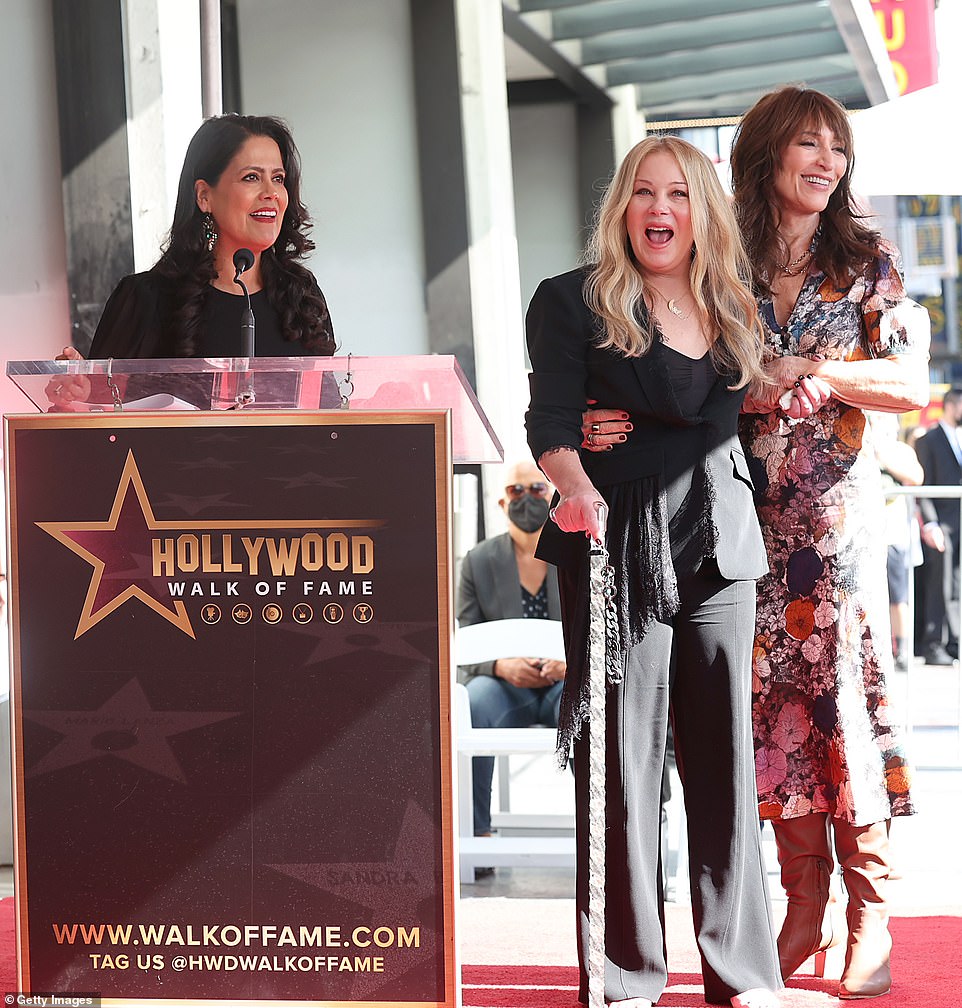 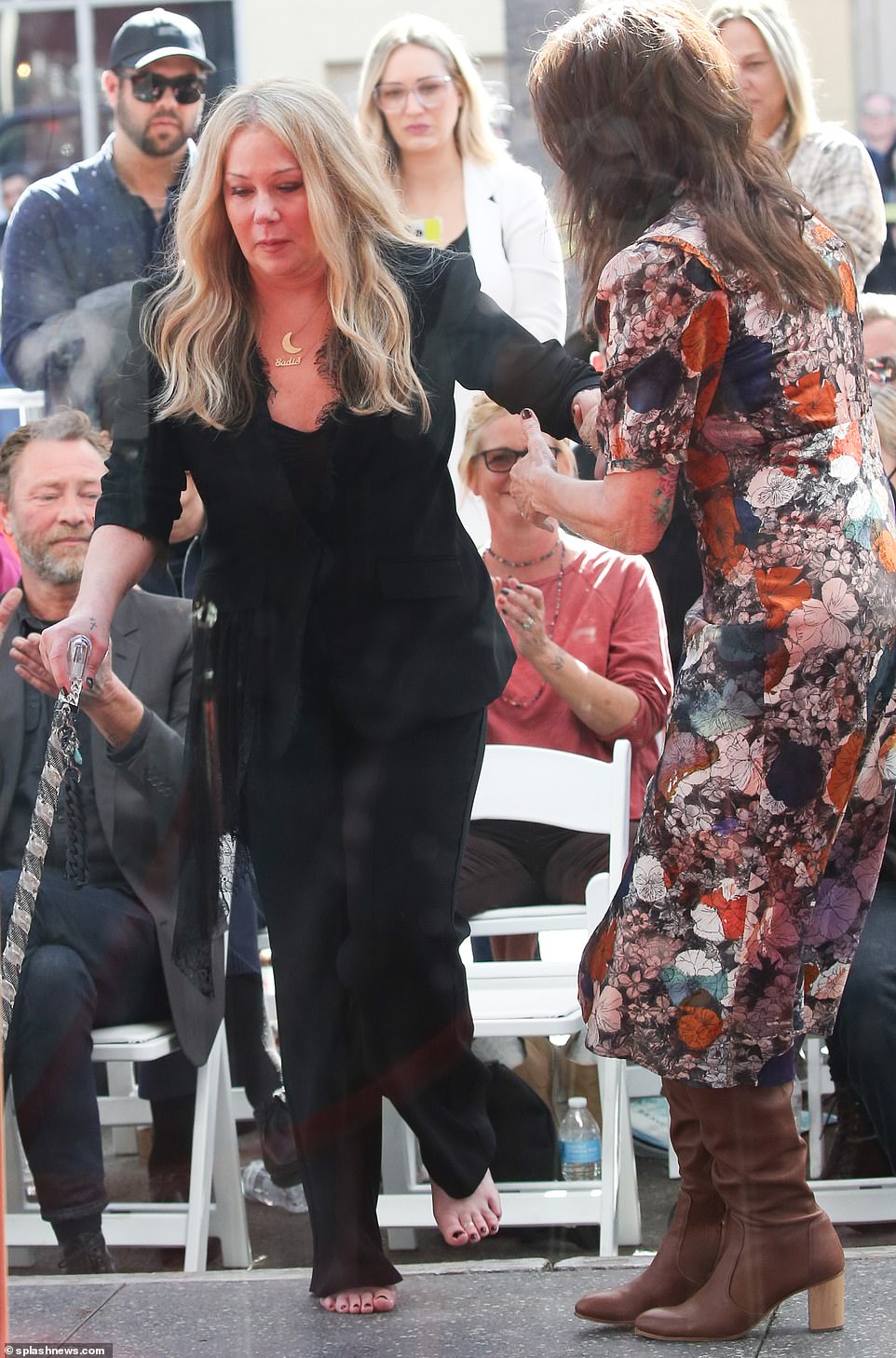 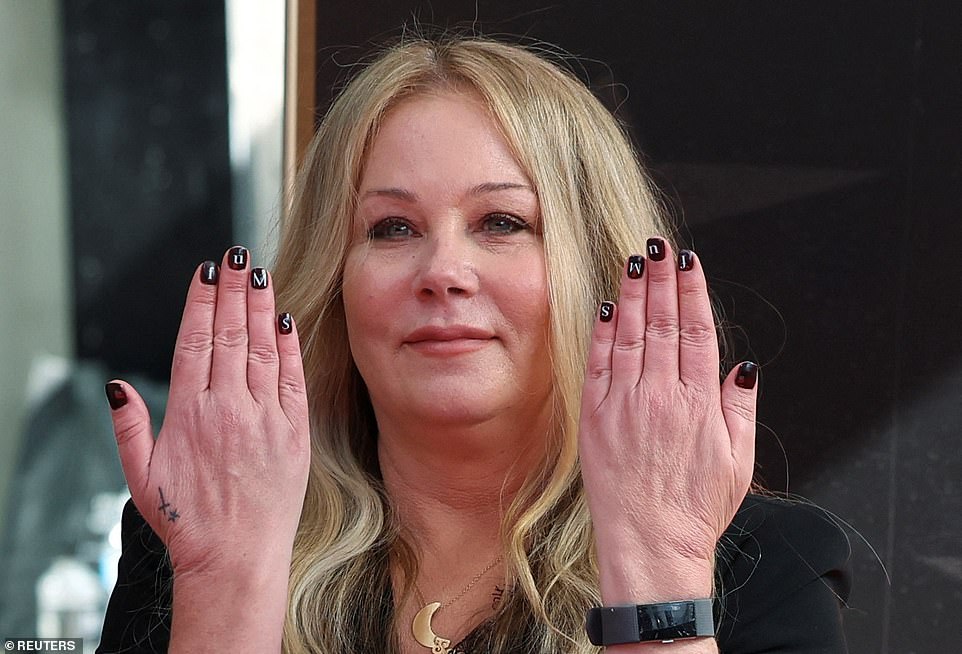 She also showed off her hands, revealing a manicure reading 'FU MS,' before dipping them in the cement to seal her place on the Walk of Fame

She began her speech on Monday by describing how grateful she was to be honored with a star.

'I've had a really interesting life,' said Applegate, who was barefoot and stood with the aid of a cane as she was propped up by her Married With Children co-star Katey Sagal.

'"I effing want one" — and I was five-years-old,' she said. 'So this day means more to me than you could possibly imagine.

I don't say I have friends, I have family. These people take care of me every day of my life, and without them I don't know what I would do.'

But, she said, 'the most important person in this world' is her daughter, Sadie Grace.

'You are so much more than even you know,' the famed actress told her daughter. 'You are so beautiful and kind and loving and smart and interesting, and I am blessed every day that I get to wake up and take you to school.

'You are my everything,' Applegate said. 'Thank you for standing by my side through all of this.' 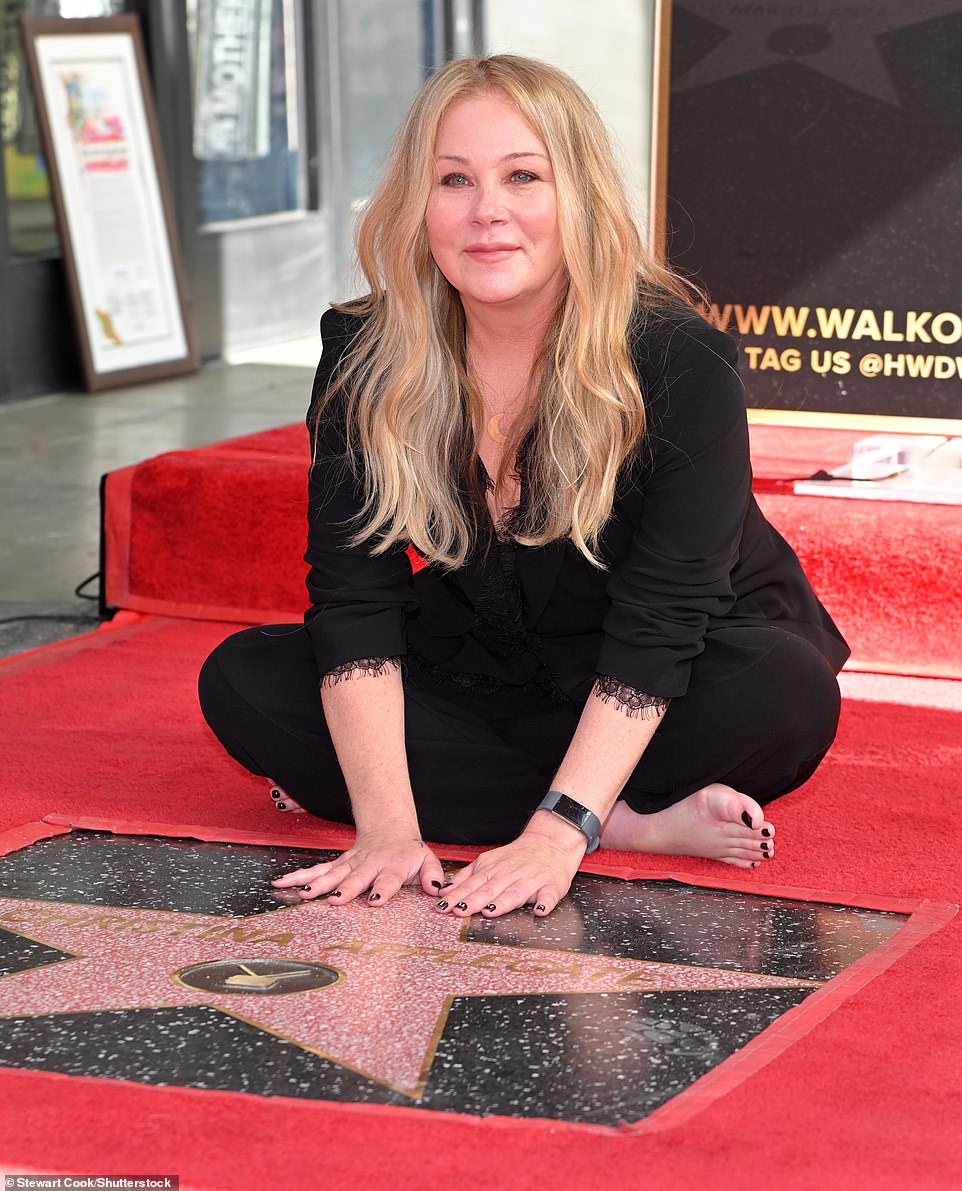 The event marks the actress's first public appearance since she revealed how multiple sclerosis had devastated her mobility, left her unable to walk without the support of a cane and had prompted her to gain 40lbs 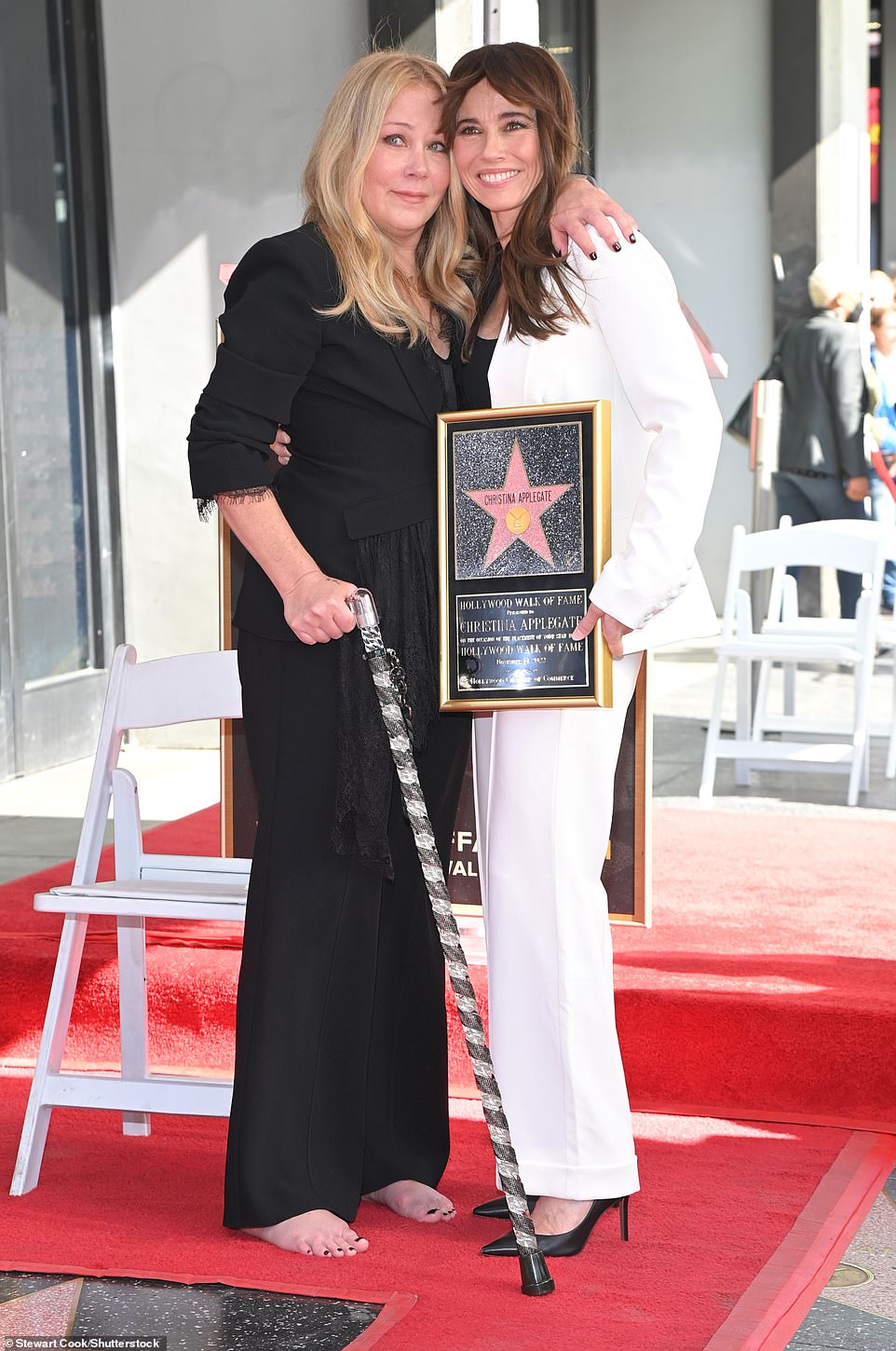 Applegate who stood barefoot on the red carpet on the Hollywood Walk of Fame, leaned on actor Linda Cardellini as they took photos at the event 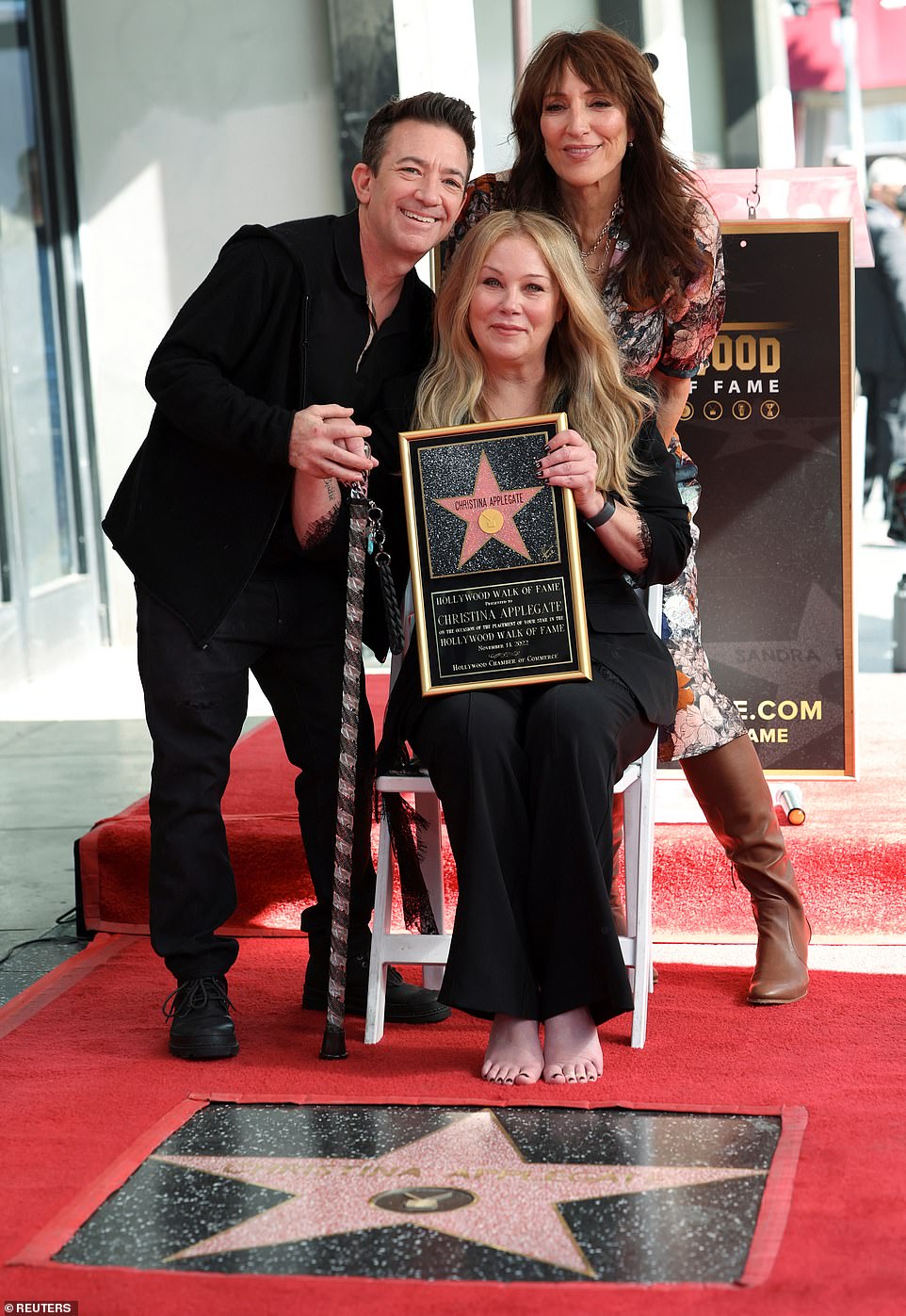 Applegate sat proudly with her plaque honoring her for her years of work in Hollywood, both in television and films. She is pictured with her Married with Children co-stars David Faustino and Katey Sagal 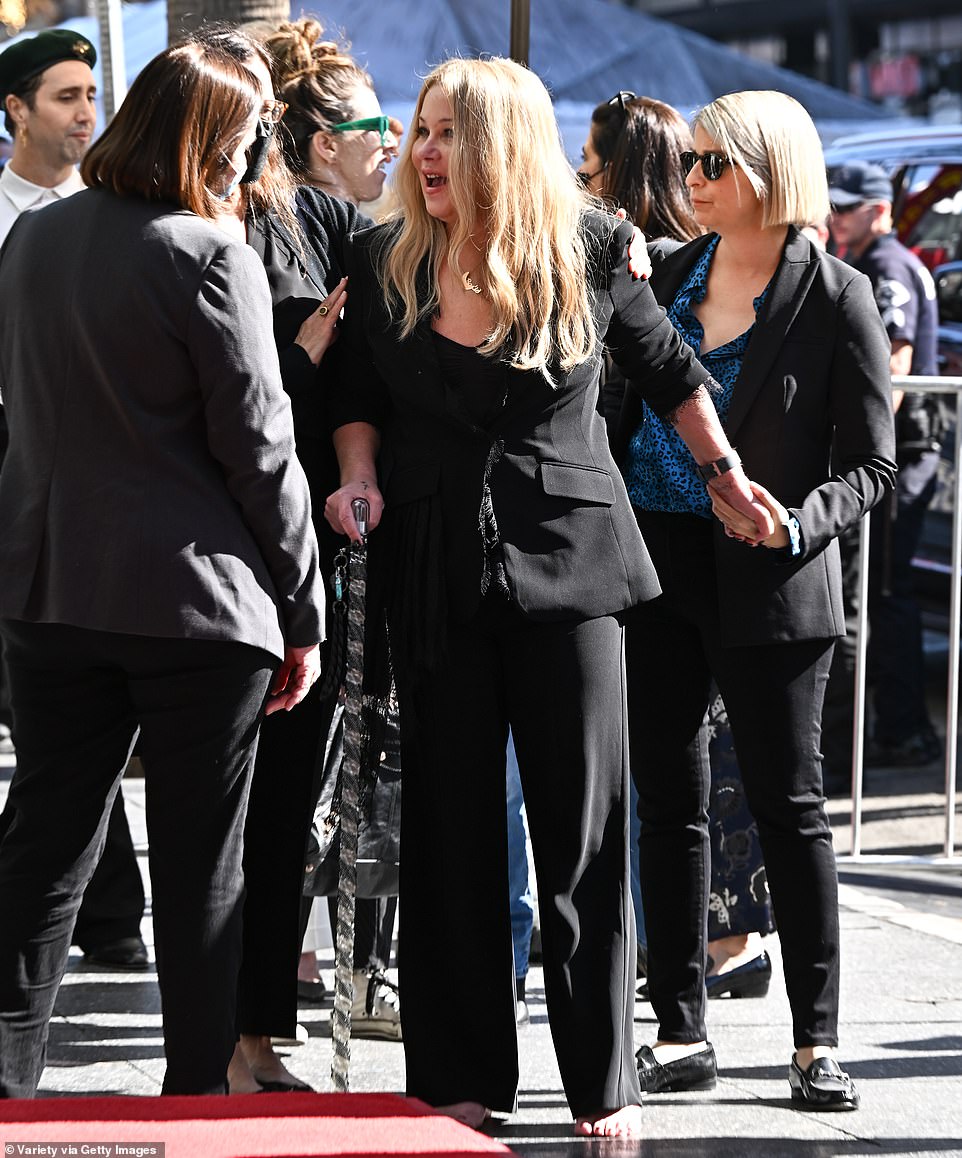 Applegate is pictured here greeting guests at the ceremony on Monday. She has been a TV and film staple since her childhood. Her breakthrough role in Married With Children, where she played promiscuous teen Kelly Bundy alongside Katey Sagal and Ed O'Neill gave way to roles in a series of shows and movies including the cult classic Anchorman and her current Netflix series Dead To Me, the final season of which airs on November 17

Applegate was diagnosed with MS while in production on the final season of her show, Dead to Me, which then took a five month break so that she could begin her treatment.

But the Anchorman star pushed on to continue shooting the last season.

'I had an obligation. The powers that be were like, "Let’s just stop. We don’t need to finish it. Let's put a few episodes together [with previously recorded footage],"'  Applegate previously told The New York Times. 'I said, "No. We’re going to do it, but we’re going to do it on my terms."'

She also shared that when production of the show — which has earned her two Emmy nominations — paused 'There was the sense of, "Well, let’s get her some medicine so she can get better."'

However, the actress added that 'There is no better' and said, 'I’m never going to accept this. I'm p***ed.'

Ultimately taking the break was 'good' for her: 'I needed to process my loss of my life, my loss of that part of me. So I needed that time. Although it’s not like I came on the other side of it, like, "Woohoo, I’m totally fine."'

Prior to receiving her star and giving a speech, Applegate sat in the audience on Monday leaning on her bejeweled cane 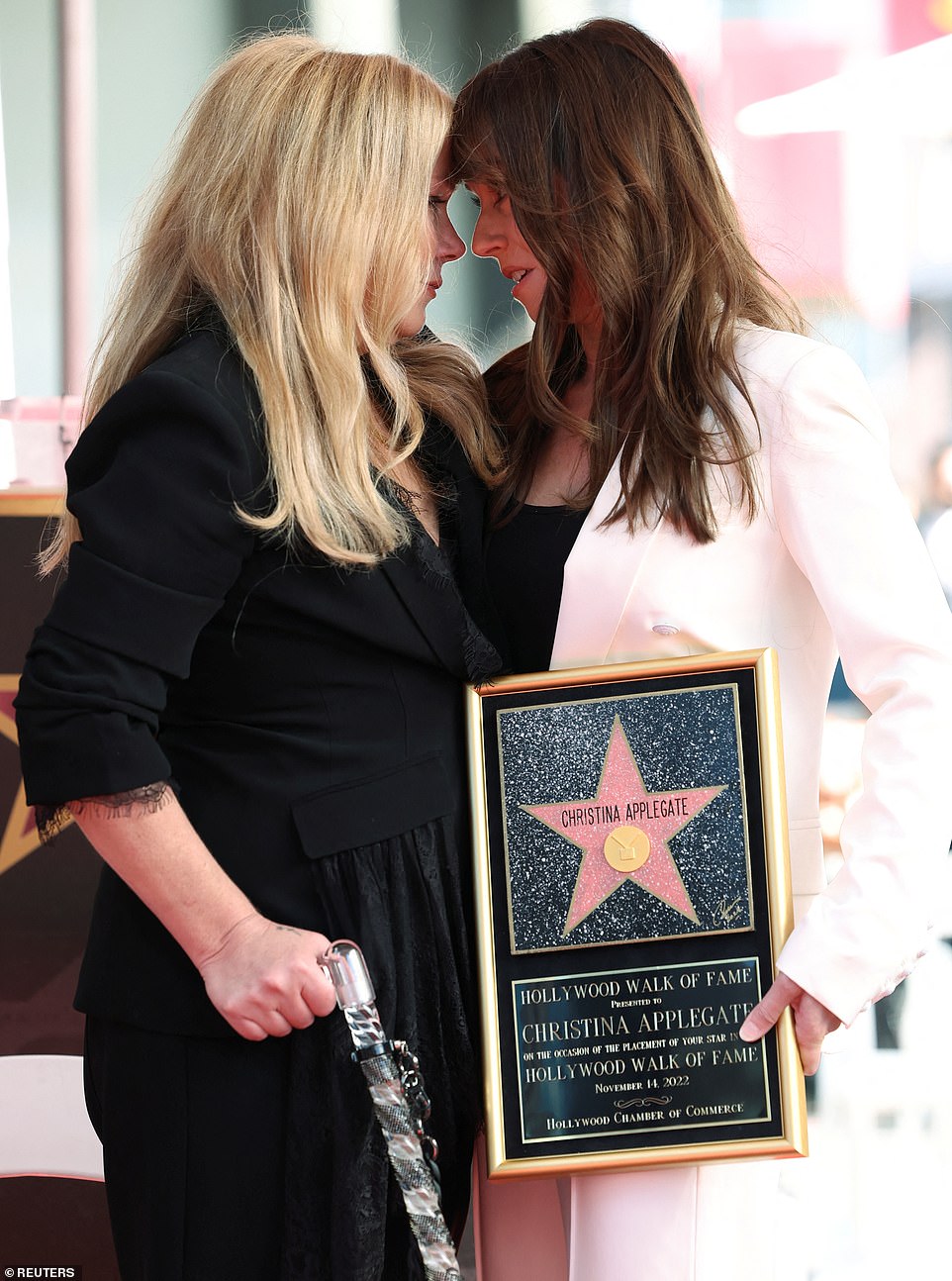 Applegate thanked all of her friends, whom she said she considers family, for helping her get through the disease. She is pictured with her Dead to Me co-star Linda Cardellini 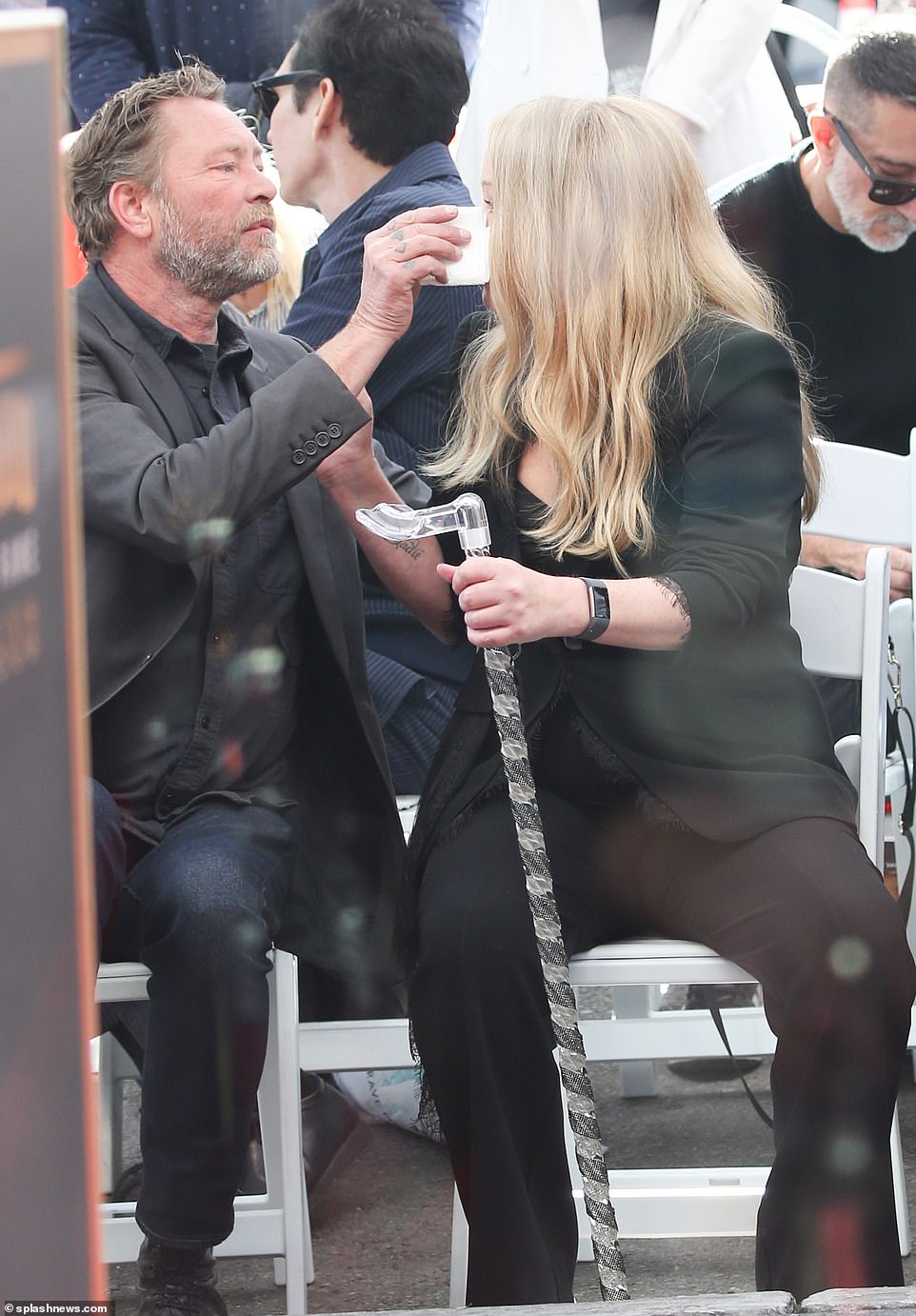 Applegate's devoted husband, Martyn LeNoble, dabbed away her tears at the ceremony on Monday 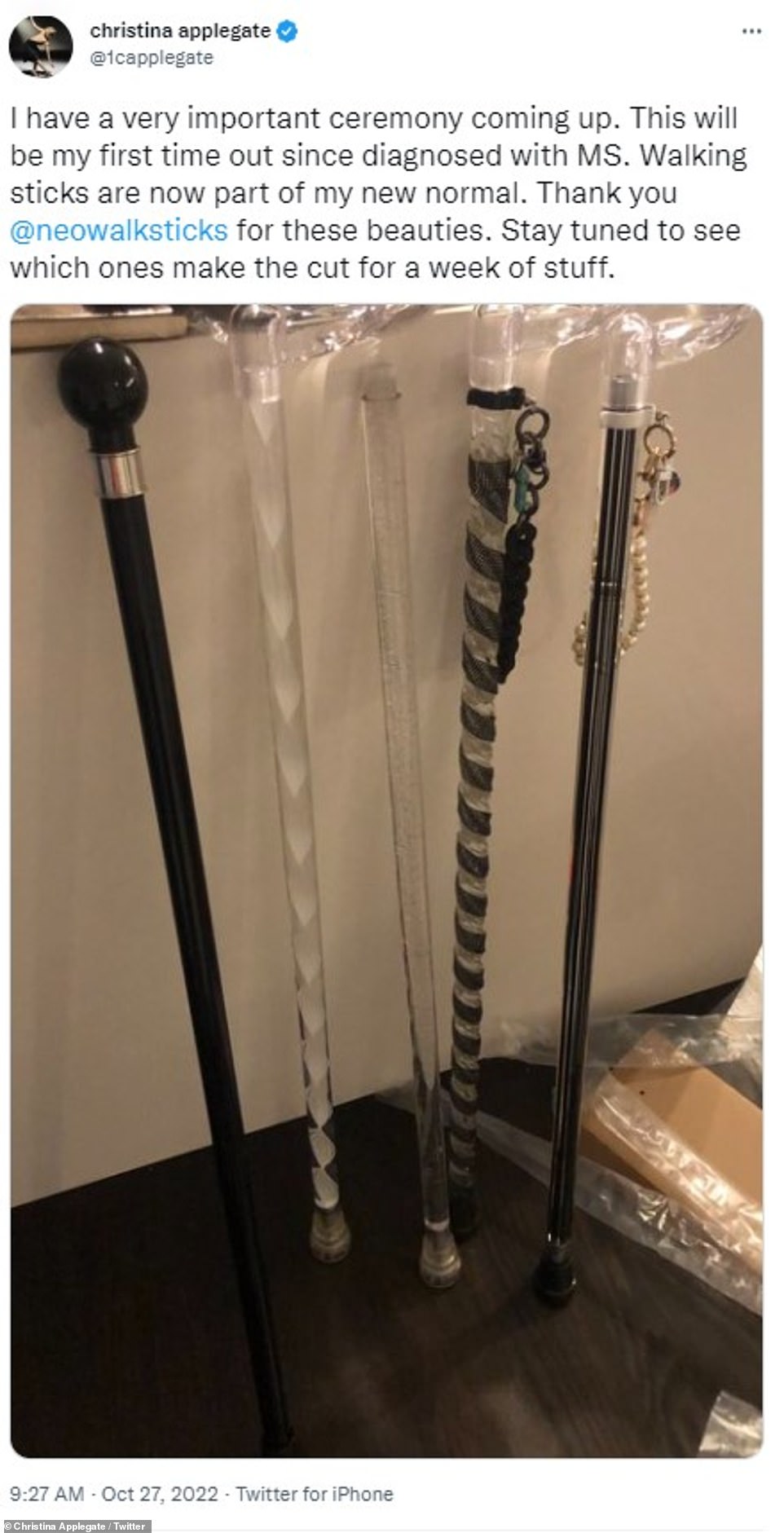 The actress posted a photo of her canes on Twitter in October, and said needing help with walking is her 'new normal' as she looked forward to the star ceremony

The Los Angeles born beauty also said that looking back there were some signs of the disease, as she talked about losing her balance in a dance scene during the first season.

'I wish I had paid attention. But who was I to know?' she said.

The star shared that once she returned, she needed a wheelchair to get to set due to her declined mobility, and that a sound technician had to hold up her legs in order to get certain shots.

She said she couldn't film shots of her walking into a room because she would need assistance, and that she would lean against doors while standing to be able to stay up.

The star also said she isn't sure whether she'll watch the final season as it's too painful, but that she wanted to finish shooting it for her co-star Linda Cardellini and show creator Liz Feldman.

'If people hate it, if people love it, if all they can concentrate on is, "Ooh, look at the cripple," that’s not up to me. I’m sure that people are going to be, like, "I can’t get past it." Fine, don’t get past it, then. But hopefully people can get past it and just enjoy the ride and say goodbye to these two girls,' she stated.

In the show Applegate stars as sardonic widow Jen Harding who, after the loss of her husband from a hit-and-run accident, crosses paths with free spirited Judy Hale (played by Cardellini) at a grief support group.

Their unlikely friendship, eventually, becomes complicated by secrets, lies, and an accidental murder that bonds them for life.

Dead To Me premiered its first season on the streaming platform with a 10-episode drop in May 2019. The half-hour dark comedy returned for its second season in May 2020, also with 10-episodes.

Though the series was renewed for a third season in June 2020, the coronavirus pandemic and the subsequent Hollywood production shutdown kept production at a standstill.

The trailer for the final season of the hit Netflix show was finally released just recently. 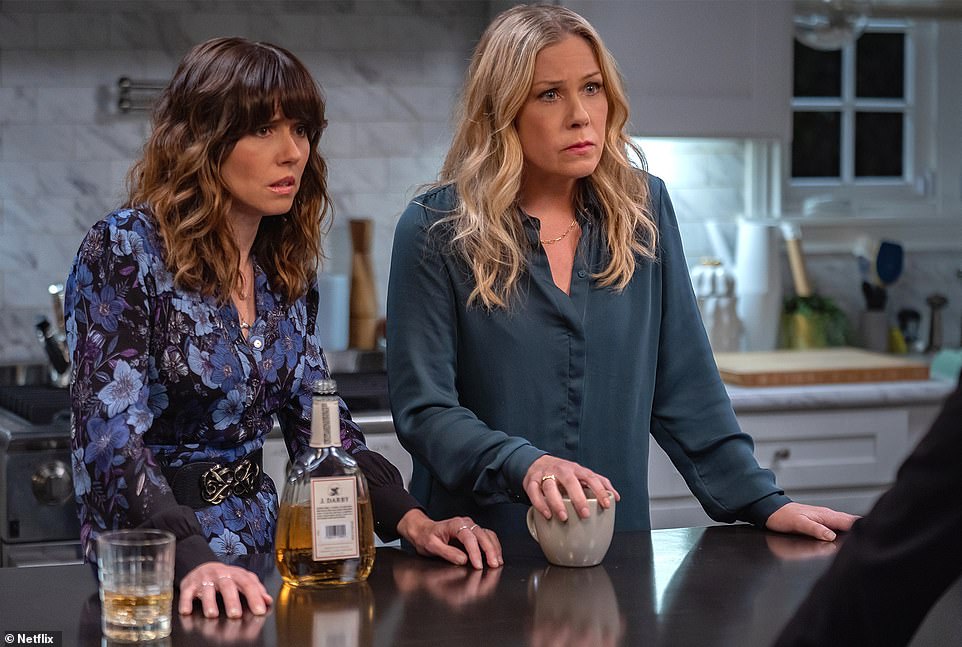 The Dead To Me actress, 50, revealed her diagnosis in August 2021, and recently shared how she gained 40 pounds and now struggles to walk without the support of a cane as a result of the condition  (pictured with Linda Cardellini in Dead To Me) 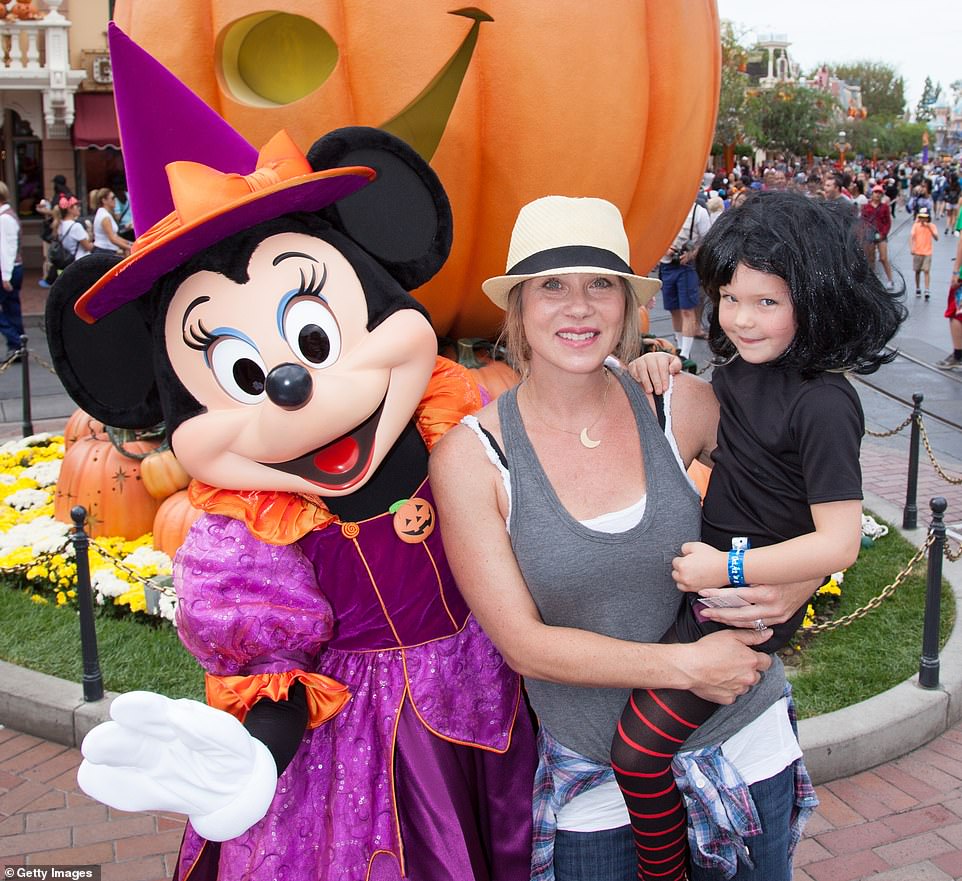 Applegate gave a special shoutout to her daughter, Sadie LeNoble, whom she called 'the most important person in this world' at the ceremony Monday. The actress and her daughter are pictured here in Disneyland in October 2015

Applegate first made her television debut on the March 7, 1972, episode of the NBC daytime drama, Days of Our Lives, as the baby son of the character played by her mother, Nancy Priddy.

Her next roles came in 1981 as a dancer in the film, Beatlemania, and on an episode of the NBC Western drama Father Murphy.

The actress' first series was the 1985 Showtime comedy, Washingtoon, playing the daughter of an idealistic new congressman, played by Thomas Callaway.

Applegate's first major television role, though, came with Heart of the City, an ABC crime drama that ran for 13 episodes in the 1986-87 season, where she played as the daughter of a police detective, played by Robert Desiderio.

Applegate was cast later in 1987 in her most famous role, the sexy and sarcastic Kelly Bundy, after the actors who first played the Bundy children in the Married... with Children pilot, Tina Caspary and Hunter Carson, were dropped because the show's producers worried about a lack of chemistry between them and O'Neill and Sagal.

She returned to television following the cancellation of Married... with Children, starring in Jesse as a single mother raising her nine-year-old son, Eric Lloyd.

Applegate was cast in 1987 in her most famous role, the sexy and sarcastic Kelly Bundy, on the show Married... with Children

The NBC comedy ran from 1998- 2000. Applegate received her first Emmy nomination and only victory three years after the show ended for outstanding guest actress in a comedy series for her portrayal of the middle sister of Rachel Green, played by Jennifer Aniston, in Friends.'

Applegate reprised the role the following season, receiving another Emmy nomination in the category, but lost to Laura Linney.

She also received outstanding lead actress in a comedy series Emmy nominations for both seasons of the 2007-09 ABC comedy, Samantha Who? for role as a woman who wakes up from an eight-day coma with no recollection of past experiences, then discovers she wasn't a particularly honest, good-hearted or loving person and is forced to struggle with her desire to be good and temptation not to be.

Applegate's other honors include a best actress in a musical Tony nomination as taxi dancer Charity Hope Valentine in the 2005 revival of Sweet Charity.

She has appeared in films including Anchorman: The Legend of Ron Burgundy, The Sweetest Thing and Don't Tell Mom the Babysitter's Dead.

WHAT IS MULTIPLE SCLEROSIS?

Multiple sclerosis (known as MS) is a condition in which the immune system attacks the body and causes nerve damage to the brain and spinal cord.

It is an incurable, lifelong condition. Symptoms can be mild in some, and in others more extreme causing severe disability.

MS affects 2.3 million people worldwide - including around one million in the US, and 100,000 in the UK.

It is more than twice as common in women as it is in men. A person is usually diagnosed in their 20s and 30s.

The condition is more commonly diagnosed in people of European ancestry.

The cause isn't clear. There may be genes associated with it, but it is not directly hereditary. Smoking and low vitamin D levels are also linked to MS.

The majority of sufferers will have episodes of symptoms which go away and come back, while some have ones which get gradually worse over time.

Symptoms can be managed with medication and therapy.

The condition shortens the average life expectancy by around five to 10 years.