The Anglo-Spanish airline giant, which also owns Iberia and Aer Lingus, revealed revenues were €7.3billion (£6.3 billion) in the three months to September, a 0.9 per cent rise on the same period three years ago and more than double the amount it earned last year.

This was achieved even though traveller capacity was only 81 per cent of 2019 volumes, partly resulting from London Heathrow Airport imposing a daily passenger cap of 100,000 over the summer and also from disruptions occurring across Europe and the US. 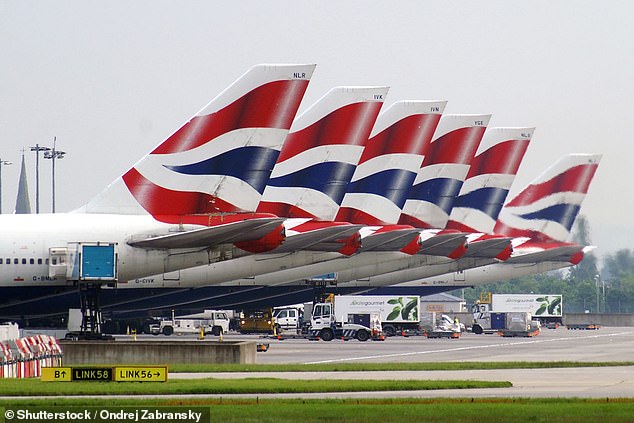 Recovery: The British Airways owner revealed revenues were €7.3billion (£6.3 billion) in the three months to September, a 0.9 per cent rise on the equivalent period three years ago

Staff shortages left Heathrow - Europe's busiest airport - struggling to cope with a rapid influx of customers, many of whom suffered long queues, delays or flight cancellations before the cap was introduced.

Problems also affected other major European airports over the summer.

IAG's trading was also significantly affected by travel restrictions in the Asia-Pacific region, where lockdowns have tended to be much harsher, especially in China.

Yet all of the firm's airlines achieved profitability, driven by premium leisure travel fully recovering to pandemic-era levels as customers took holidays in Europe, the Americas and the Caribbean.

International Airlines Group shares were down 2.9 per cent to 116.2 during the late morning on Friday. Their value has declined by around a quarter so far in 2022.

FTSE 100-listed IAG rebounded from a €574million third-quarter loss last year to an €853million profit this time around.

Based on current fuel prices and exchange rates, it predicts an operating profit of around €1.1billion for this year.

Luis Gallego, chief executive of IAG, hailed the group's 'strong performance, though he warned: 'While demand remains strong, we are conscious of the uncertainties in the economic outlook and the ongoing pressures on households.

'Against this backdrop, we are focused on adapting our operations to meet demand, strengthening our balance sheet by re-building our profitability and cashflows and capitalising on our high level of liquidity.'

An uplift should come from Heathrow ending passenger capacity limits on Sunday, having previously planned to do so last month before extending the measure due to staff shortfalls.

But the airport warned yesterday that caps could be reintroduced over the Christmas period in order to avoid potential disruption for passengers.

'We are working with airlines to agree on a highly targeted mechanism that, if needed, would align supply and demand on a small number of peak days in the lead-up to Christmas,' it remarked.

On top of this, current inflationary pressures stemming largely from soaring energy prices, Russia's full-scale invasion of Ukraine and a stronger dollar mean many consumers could put off an overseas trip.

Derren Nathan, the head of equity research at Hargreaves Lansdown, said: 'As the cost-of-living crisis intensifies in many key markets, holidays are set to drop off the essentials list, and so we are cautious about next year.'