After another ugly loss, what is the point of this season for Tom Brady?

After another ugly loss, what is the point of this season for Tom Brady?

It was midway through the third quarter in Carolina on Sunday, with the Buccaneers trailing 14-0. At the peak of the Tom Brady Era, the deficit would have felt surmountable. After all, this was a matchup the oddsmakers almost considered a lock for Tampa Bay, listing them as 13.5-point favorites. This was the game for Brady and his offense to take out their anger on the lowly Panthers after losing to Pittsburgh last week. After all, in Carolina they were facing an interim head coach, former XFL quarterback PJ Walker, and a franchise which had just lost its best player.

But after yet another stunning loss, this one 21-3 and somehow worse than last week’s, it’s safe to declare the Tom Brady Era as we know it O-V-E-R. As Oliver Connolly pointed out in these pages last week, many of Tampa’s woes are not down to Brady. The wideouts continued to be a detriment on Sunday, starting with Mike Evans dropping what should have been a touchdown on the opening drive. According to ESPN Stats and Info, Evans had 10.9 yards of separation between himself and the nearest defender. It was the most wide-open drop on a pass traveling over 30 yards this season.

The transition from Bruce Arians to Todd Bowles already feels tarnished, and offensive coordinator Byron Leftwich may want to avoid social media for a while after calling another disastrous game. The Panthers defense also deserves a boatload of credit. They were relentless throughout, even down to their third-string cornerback, who had to play due to injuries.

But the “greatest of all time” should have figured out some cracks. He should have rallied his team at halftime. But they came out just as pulseless as they were in the first half. And Brady, for all of his age-defying exploits over the last few years, suddenly looks like a 45-year-old quarterback hanging on for one season too many. Many of his passes on Sunday lacked the kind of zip we saw from Brady in his early 40s, making him more prone to turnovers now.

The Bucs now sit at 3-4 with the Ravens and Rams on the horizon and almost no signs of life from Brady, his teammates and coaching staff.

Cue the obvious question: What is the point of this season for Brady?

With seven Super Bowl titles, pretty much every quarterback record worth having and enough money to make sure his grandchildren are wealthy it’s not like he needs to keep playing. He knew he wasn’t going to have some of the key offensive weapons. Antonio Brown was finally considered unreliable enough to go unsigned. Rob Gronkowski has retired. While the transition from Arians to Bowles should have been seamless, there was still going to be a new culture to learn. And the offensive line was always going to be a question. Brady has transcended these types of issues before but that was the Brady who gave every ounce of his being to propel his team. Last guy to leave, first to enter. The Brady of the Tom Brady Era as we know it didn’t take Wednesdays off. To be fair, Brady’s earned the right to do whatever the hell he wants, and he’s notoriously going through personal issues, but what’s the point of continuing to play if you’re going to miss a quarter of practices?

And there is the matter of the whole age thing. It’s not just that Brady wants to prove age is just a number for high-level athletes willing to make extreme lifestyles choices, it’s central to his TB12 brand. Maybe Brady believes himself invincible but there’s a clear pattern of elderly quarterbacks falling off a cliff. Why take the risk?

Drew Brees is the most recent example but Brett Favre’s body was basically disintegrating when he gave it one last year with Minnesota. Even Peyton Manning had 17 interceptions to just nine touchdowns in his final regular season. It still resulted in going out on top with a Super Bowl ring, thanks to one of the best defenses of our time. But Brady doesn’t have that luxury of that kind of supporting cast with these Bucs. He needs to be the rock of this team. Maybe he still is – and Tampa are not done quite yet in a weak NFC – but at the moment it’s not resulting in anything other than dysfunctional football.

In one of the numerous questionable play calls against the Panthers, Brady scrambled on a second and eight deep inside Carolina territory late in the third quarter. As Brady slowly clunked forward for a gain of a whole one-yard, TV analyst Jonathan Vilma neatly summed up the whole mess: “That ain’t it.”

MVP of the week 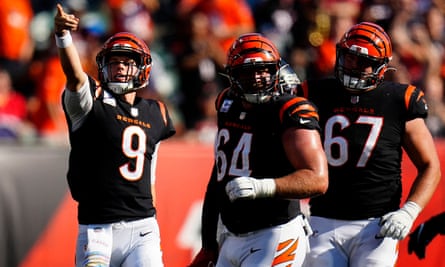 The Joe Burrow-led Bengals offense is starting to fire.

Joe Burrow, quarterback, Cincinnati Bengals. Burrow’s numbers on Sunday during the Bengals’ 35-17 victory over the Atlanta Falcons were astonishing. He finished with 501 total yards and four touchdowns. He had 345 passing yards in the first-half alone. This type of throw shouldn’t be possible:

Joe Burrow is on one today.

This time to Ja'Marr Chase for a 32-yard TD!

For his efforts Sunday, Burrow became the first quarterback in NFL history to total 500 yards and score four touchdowns twice. Two takeaways from Sunday’s offensive storm: The Burrow-Chase connection continues to astound, and Burrow is in the same company as (MVP of the week runner-up) Patrick Mahomes and Josh Allen.

Video of the week

The Cowboys-Lions tilt featured this delightful moment. Detroit’s Jamaal Williams apologizes to the ref he accidentally hit in the head, while the nearby official angrily pulls him away. Unfortunately, this was the highlight of Williams’s day given that he fumbled twice in the Lions’ 24-6 loss.

Stat of the week

Zero. That’s the number of third-down conversions the Green Bay Packers managed in their loss to the Washington Commanders. Aaron Rodgers joined Brady in the “You lost to who?” column; in Rodgers’ case it was Taylor Heinicke and the Commanders. The Packers offense was pitiful in the 23-21 loss. Rodgers was off target. His receivers failed to run effective routes. The offense failed to line up correctly multiple times. And of course Rodgers, who will make a little shy of $50m this year, yelled at his teammates, which is always helpful. The last time the Packers failed to convert a single third-down in a game was in 1999.

Privacy Notice: Newsletters may contain info about charities, online ads, and content funded by outside parties. For more information see our

Quote of the week

“Let’s just be honest: No one thought we were going to be shit.”

Ryan Neal is not wrong. This Seahawks team were supposed to implode after Russell Wilson’s departure. Instead, they keep finding ways to beat good teams. This week it was a 37-23 win over the Chargers. Second-chance sensation Geno Smith continues to play fearless football, tossing two dimes to Marquise Goodwin. Kenneth Walker lit it up with 168 rushing yards and two touchdowns. And the scrappy defense sacked Herbert three times and disrupted his rhythm all day. The 4-3 Seahawks now lead the NFC West. Rebuilding never looked so good.

Elsewhere around the league 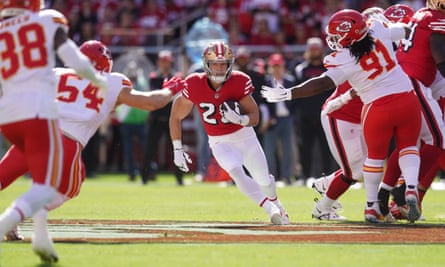 Christian McCaffrey’s 49ers career got off to a losing start.

-- When the San Francisco 49ers traded for Christian McCaffrey last week, they should have asked if he could play a little defense too. In McCaffrey’s debut, a rematch of Super Bowl 54, the Niners defense was smoked by Patrick Mahomes and company. The defensive put almost no pressure on Mahomes, allowing him to expose a subpar secondary missing Emmanuel Moseley. In the Chiefs’ 44-23 road win Mahomes put up 423 passing yards and three passing touchdowns. McCaffrey rushed for 38 yards on eight carries.

-- Everything is coming up roses in New York (ahem, New Jersey) as the Giants and Jets continue their winning ways. The 6-1 Giants won a nailbiter in Jacksonville, narrowly winning in the final moments. Emphasis on narrowly.

The @Giants defense stops Christian Kirk INCHES away from the game-winning TD!

And those pesky Jets are now 5-2 after winning a 16-9 defensive battle in Denver. Unfortunately, it looks like star rookie rusher Breece Hall tore his ACL. The sudden rise of the New York teams is one of the season’s most unexpected twists. Brian Daboll’s impact has been immeasurable and it’s not crazy to say the Giants are the second-best team in the NFC (yeah, yeah not high standards but still). And the Jets are a well-coached group who hit the jackpot in the draft – especially with Hall and the excellent Sauce Gardner. We’ll see how they respond to losing Hall and a tough stretch that includes the New England Patriots and Buffalo Bills.

-- The Miami Dolphins beat the Pittsburgh Steelers 16-10 on Sunday evening as Tua Tagovailoa returned from injury and thankfully finished the game healthy. He was steady, throwing for a touchdown and no picks, but it was the depleted Dolphins secondary that stood out, intercepting Kenny Pickett three times. The Dolphins move to 4-3, which is only good for third place in a feisty AFC East where no team is below .500.

-- Anyone want to join me in declaring National Tight End Day a bit overdone?